Why limit Throwback Thursday to Facebook?  I'll see if I can make this a consistent feature of my blog. 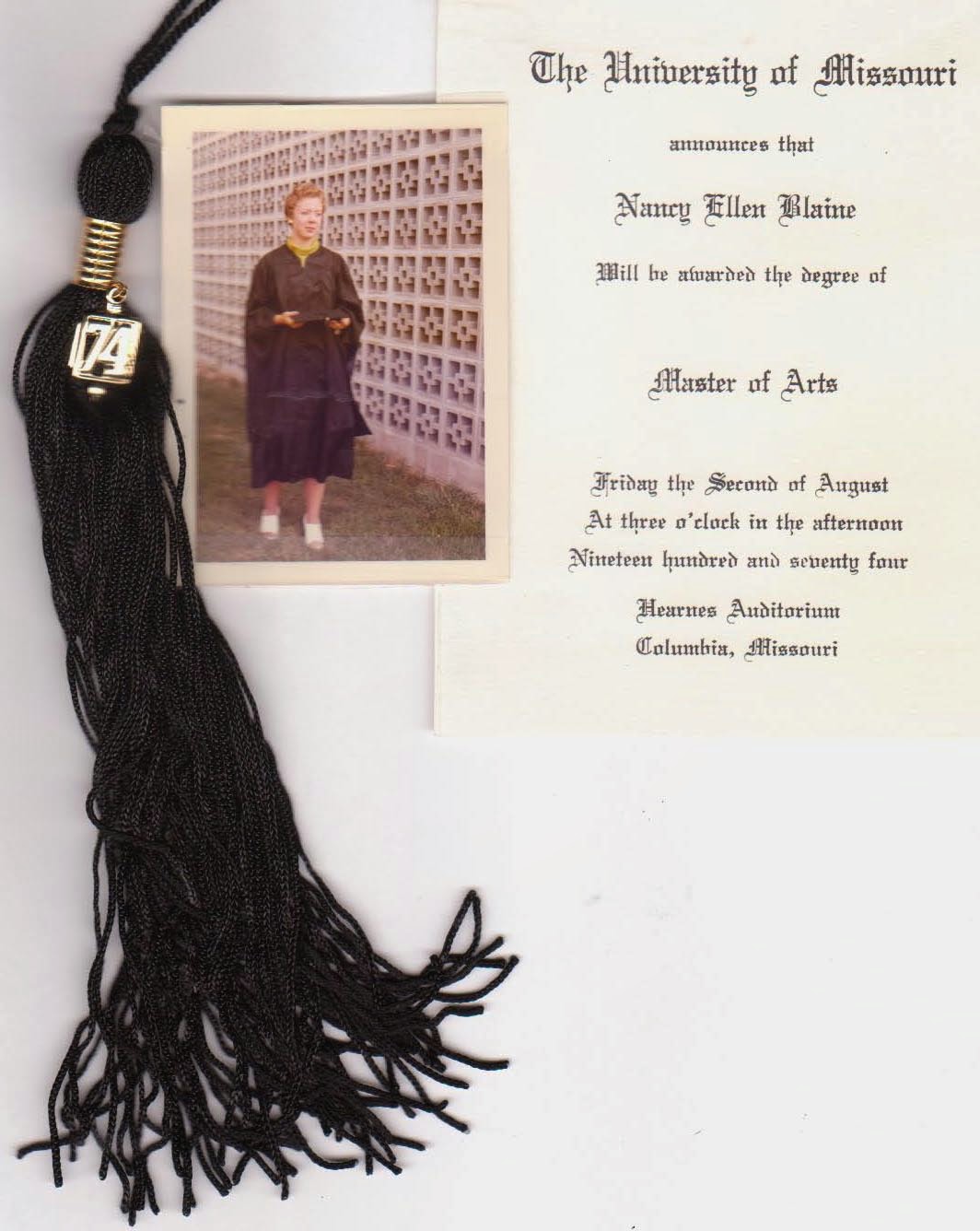 I went up to the attic to get the box marked "Nann Albums Storage." Inside were three scrapbooks from college years.  Forty years ago this week:

DWM: not much sewing 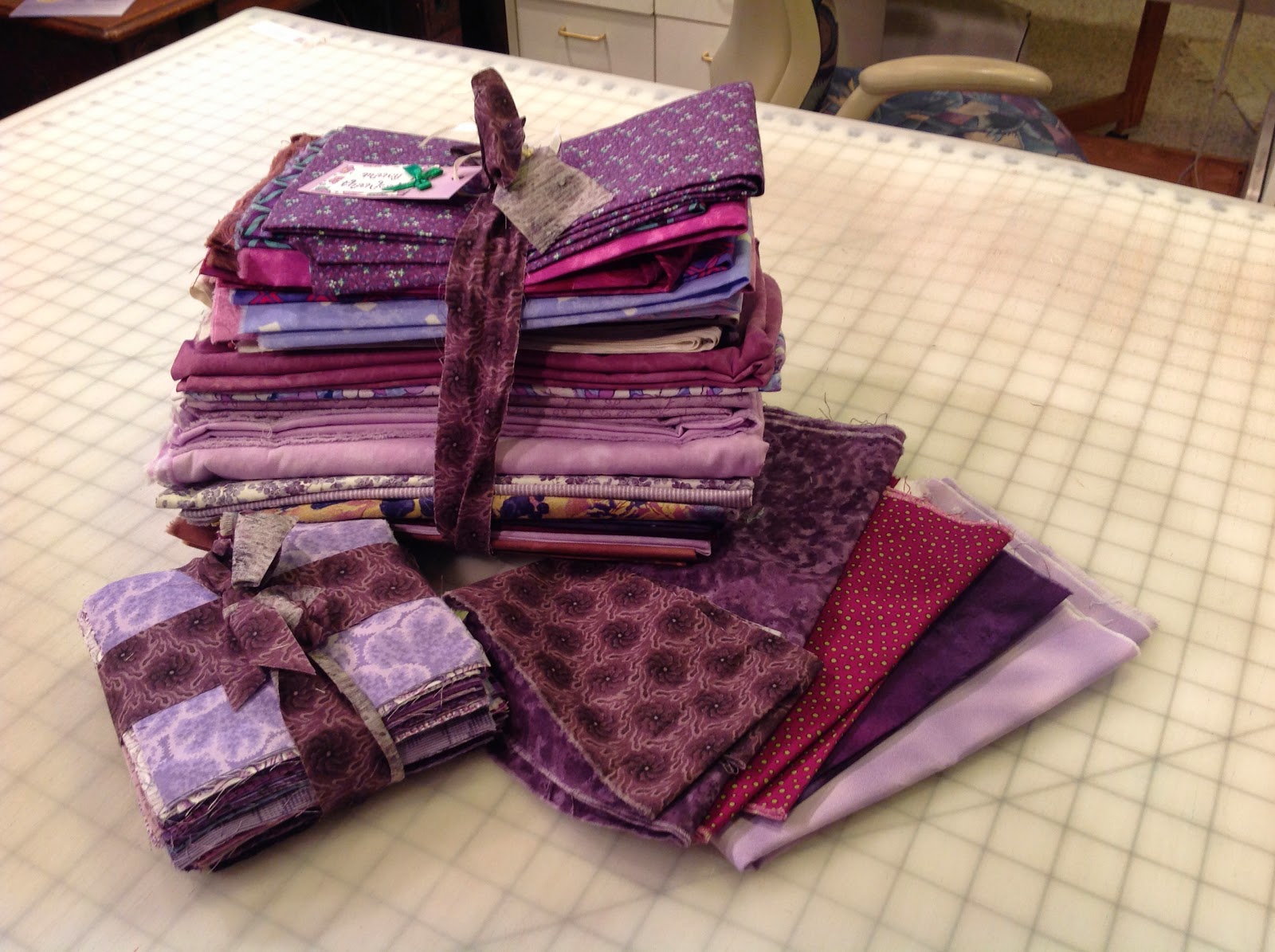 My horoscope in this morning's Chicago Tribune says, "The pieces come together. Keep a tight hold on your common sense."  Gee, does the syndicated horoscope writer know I'm a quiltmaker?

The Carpenter's Wheel flimsy is still pinned to the design wall. I didn't sew last week.  To give you an idea of what a non-sewing week it was, this assortment of purple fabric arrived on Tuesday. I did not take the box to my studio to open until Friday.

I worked on AAUW finances to follow up on the previous weekend's state board meeting. (As I observed to the AAUW-IL president, this 'volunteer' stuff seemed an awfully lot like WORK.)  The Zion-Benton Leadership Academy steering committee met Tuesday evening. Friday afternoon I went to the library system board meeting and in the evening to a retirement party for a colleague at the library in a neighboring community. Saturday Stevens and I went to the Lake County Fair (mid-morning: small crowds, decent parking). That evening we met friends for dinner at Hob Nob, a classic Wisconsin supper club on the lake in Racine (about 12 miles from home). 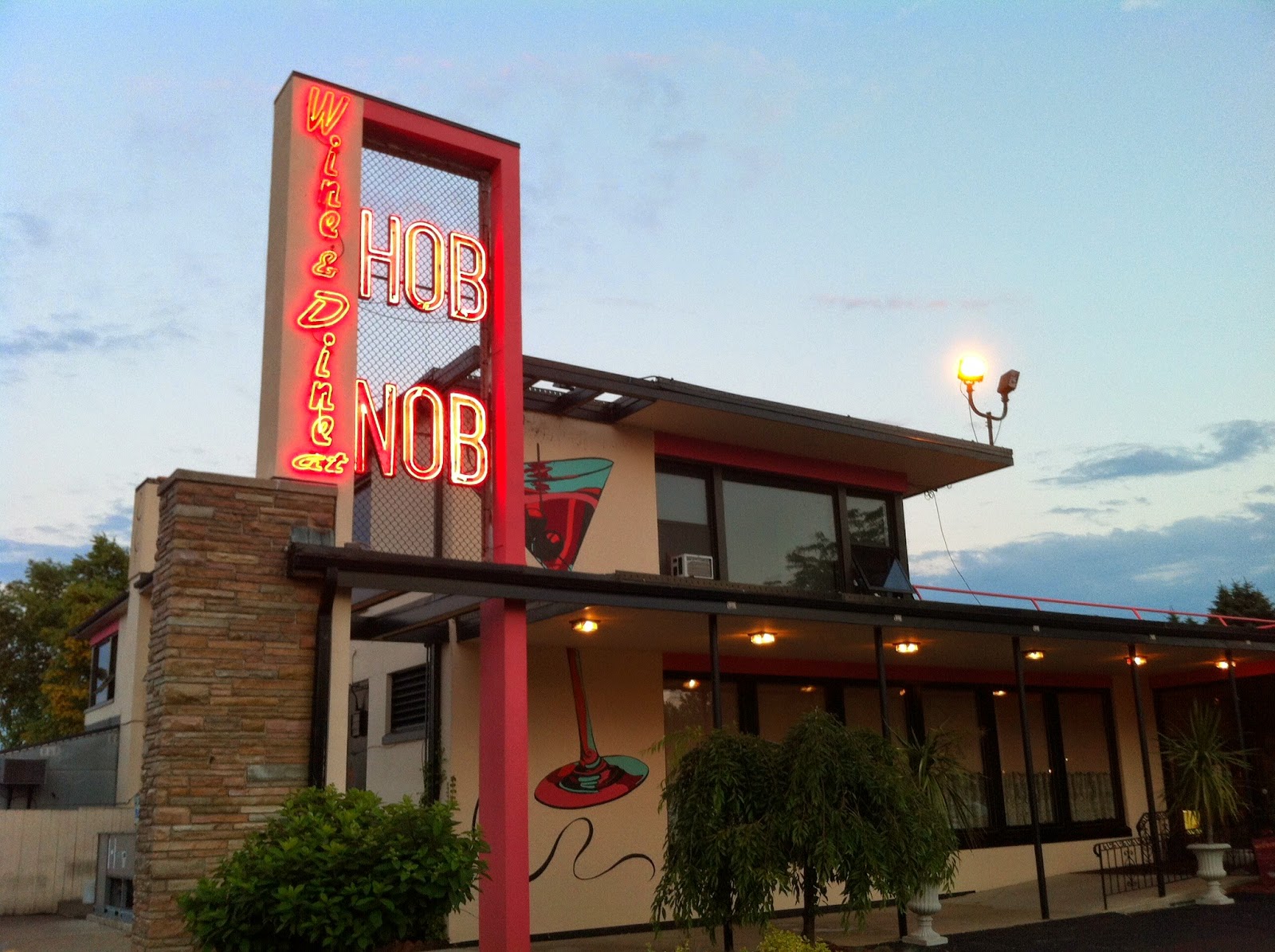 Though quilting is my significant passion/obsession, reading is the activity that has defined me since I was a small child. If, heaven forbid, I had to make a draconian choice and cease one or the other, I would stick with reading. Fortunately, I don't have to -- but this week it was indeed nice to spend two solid evenings with books.  (Wednesday:  Leaving Time by Jodi Picoult, which will be published in October. Thursday: Insane City, by Dave Barry.   Here's my review of Leaving Time.   No review for Insane City -- it was just very, very funny.) 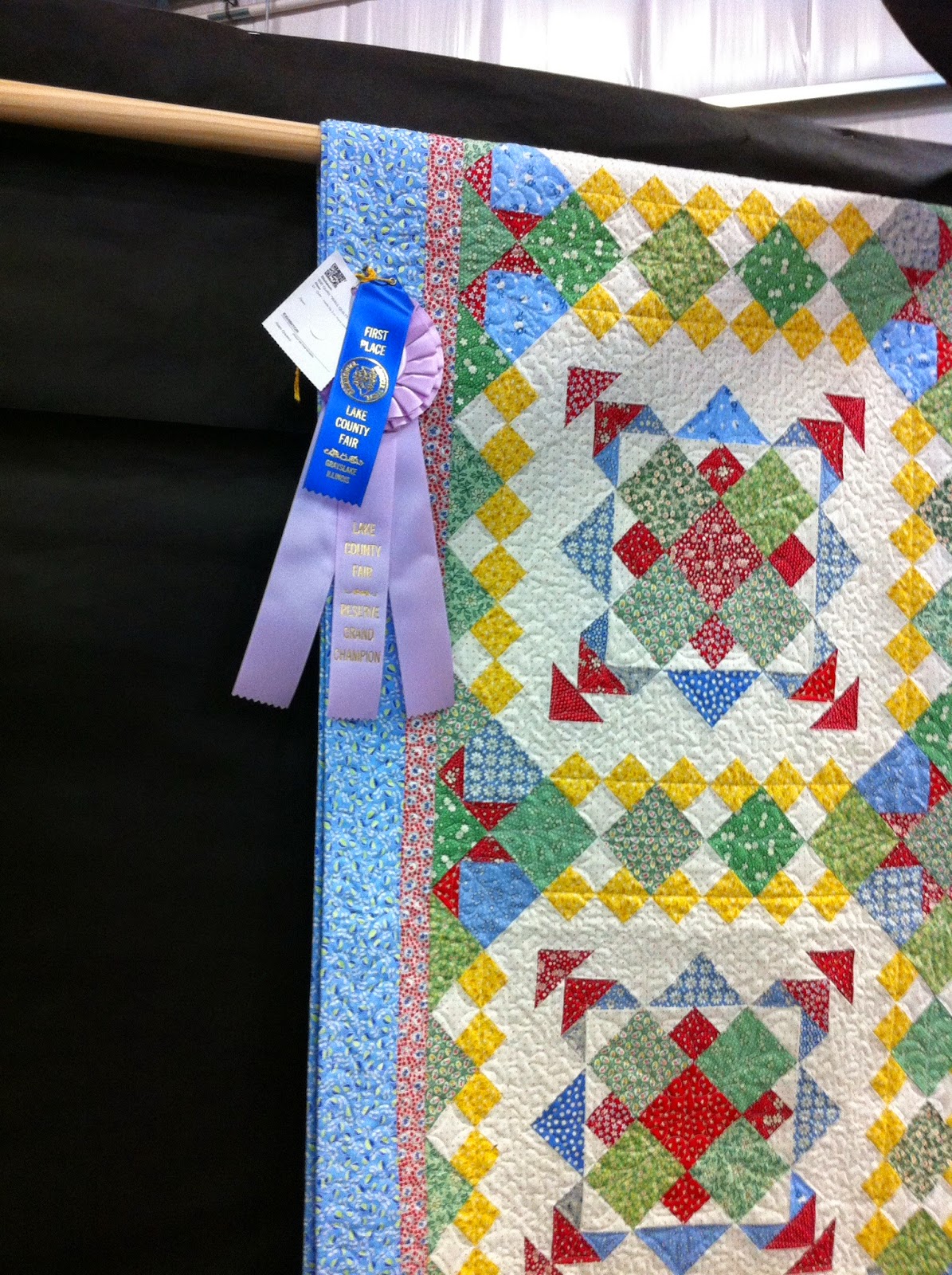 This is NOT my quilt. It was made by my friend Joan, who used her extensive 30's repros to make this award-winning version of Bonnie Hunter's Easy Street. It's a beauty!


See what more productive folks have been working on at Judy's Patchwork Times . 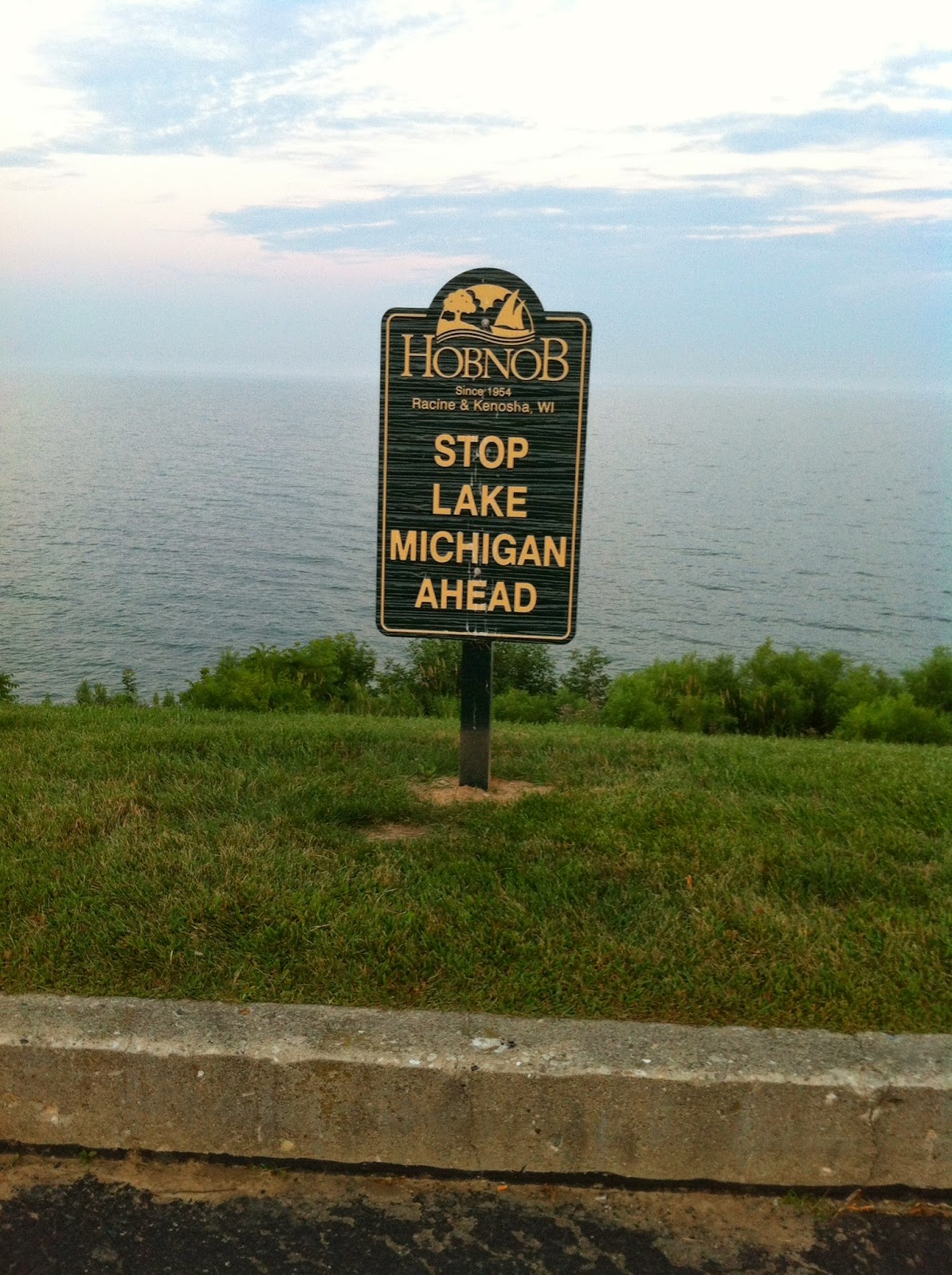 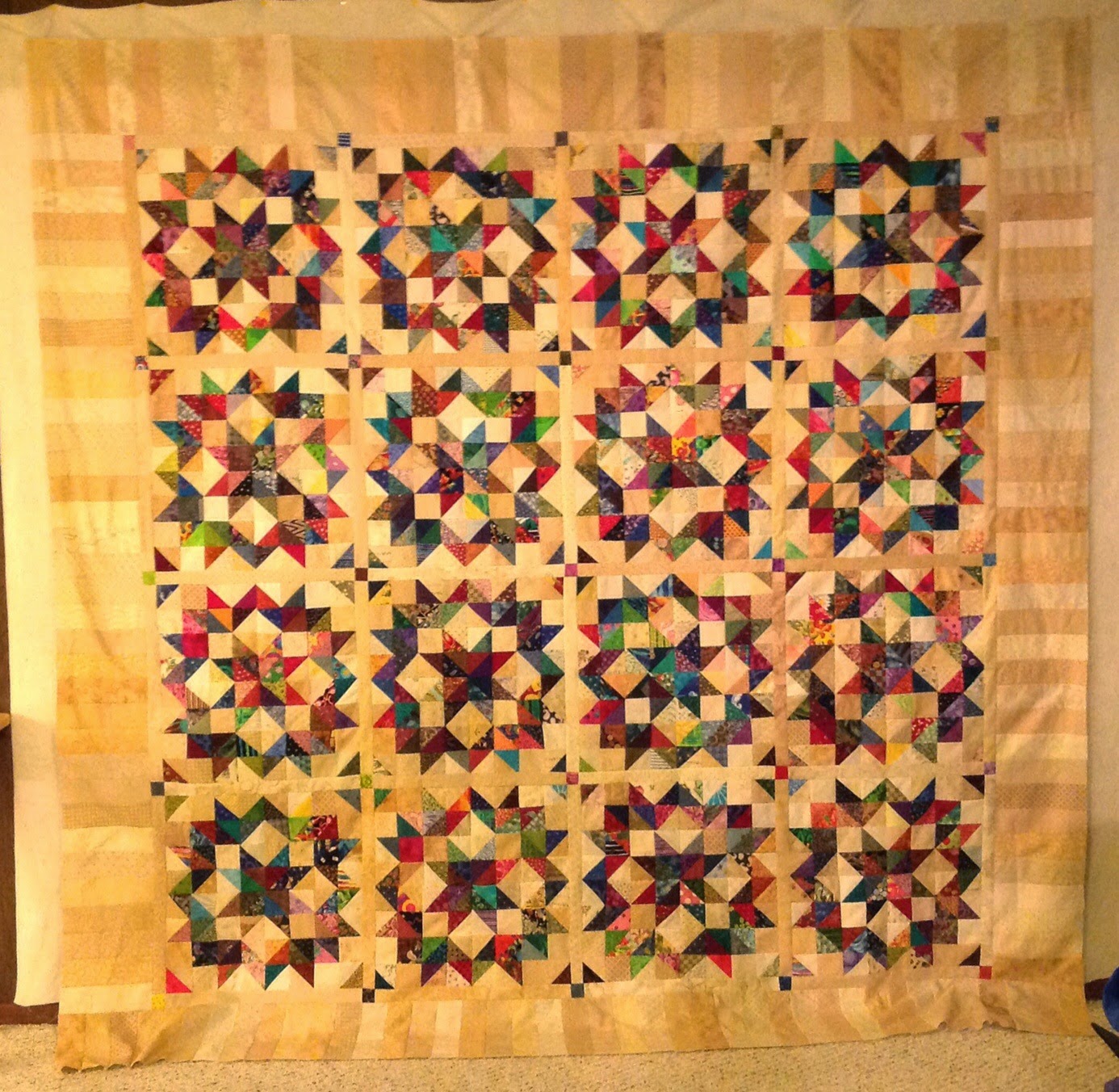 The neutral FQs I bought last month were just right for this spur-of-the-moment project. 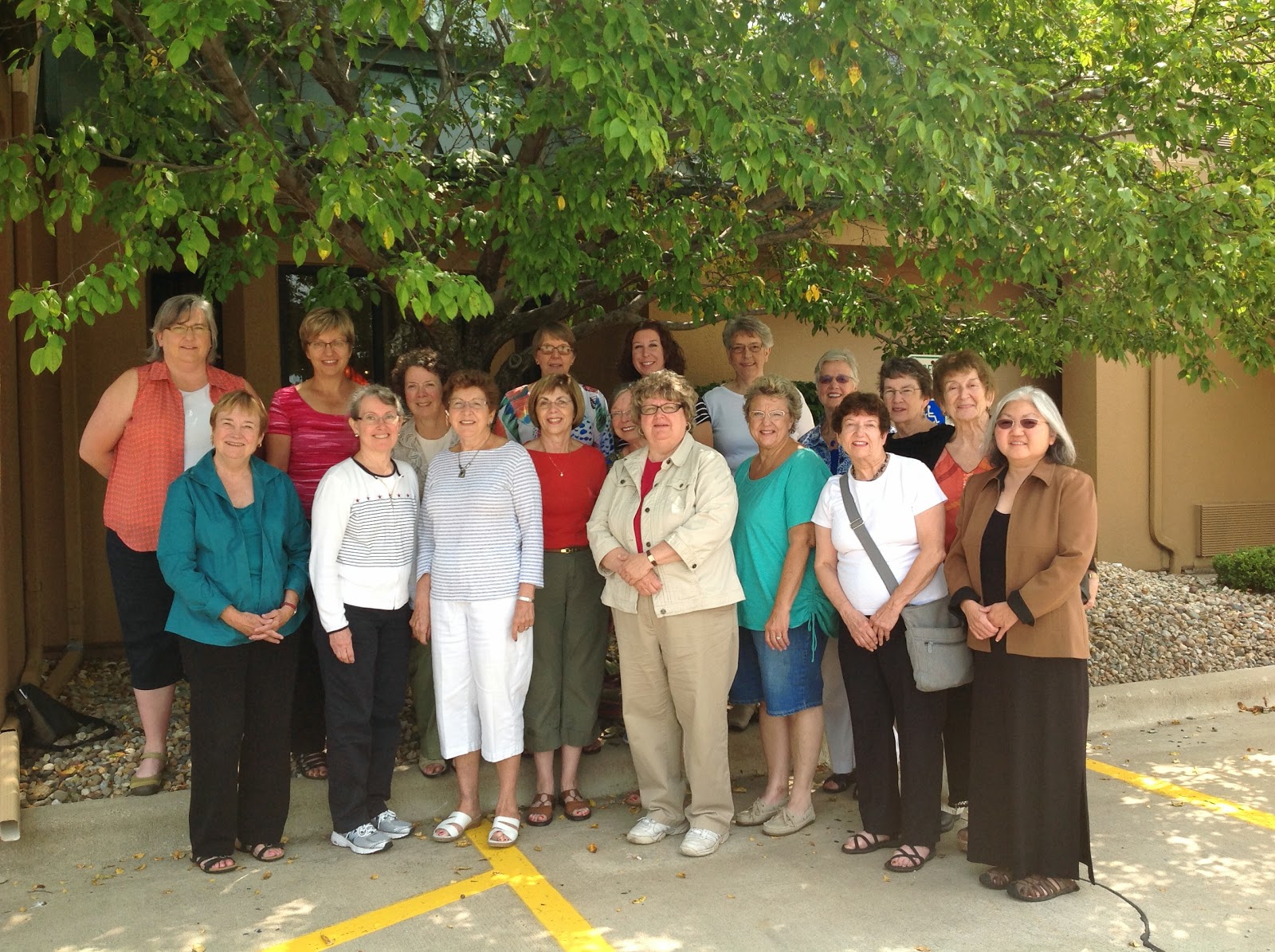 More big wheels: the AAUW-IL board met in Bloomington Friday afternoon and Saturday.  There are several new board members. It is a congenial group and we had a productive meeting. 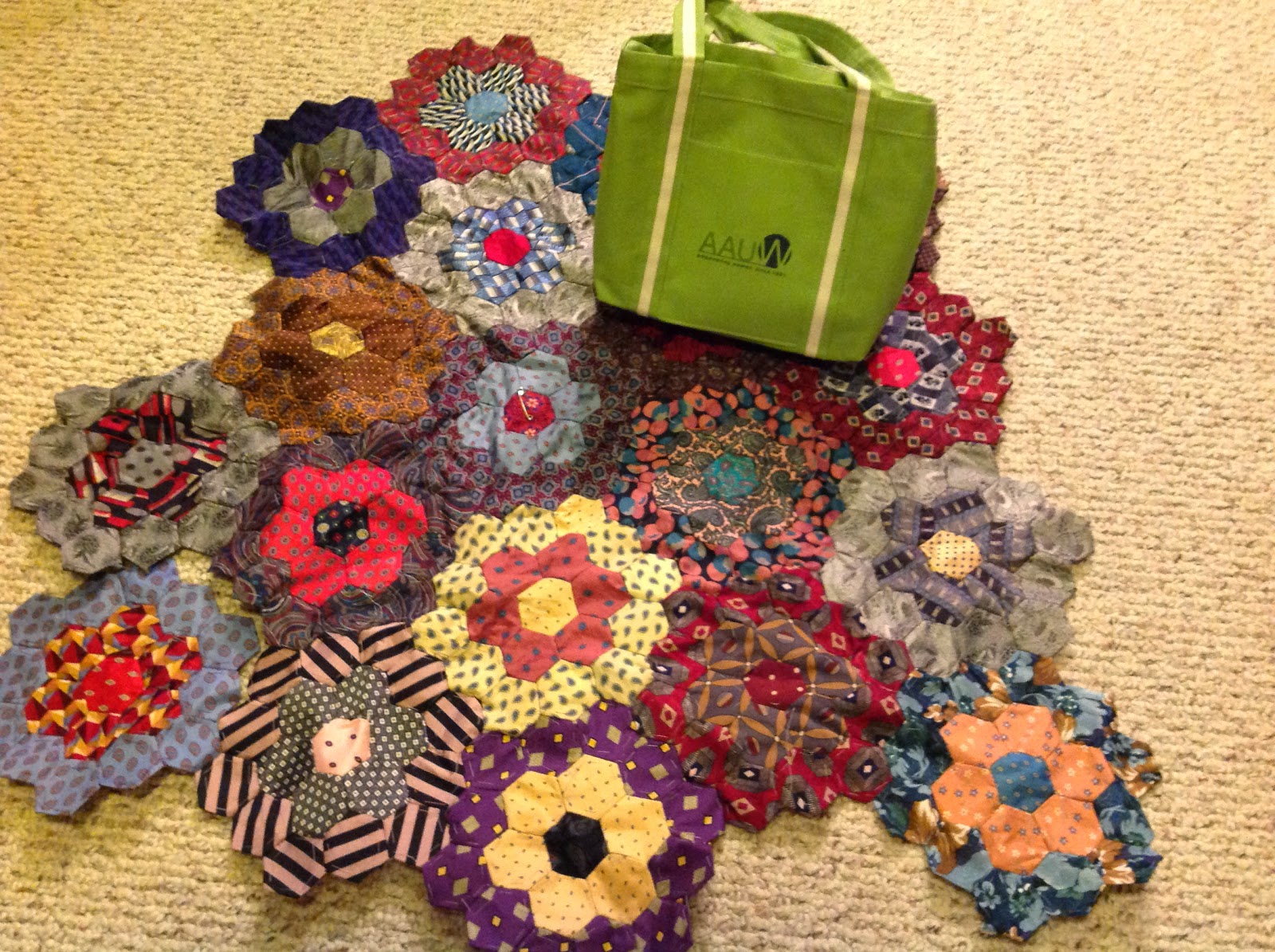 During the meeting I got three rosettes added to this part of my ongoing (neverending?) necktie hexie project.  The little AAUW tote is just the right size to carry my sewing kit and the hexies.

I'm linking up with other quiltmakers at Judy's Design Wall Monday.


P.S. At the beginning of the week I put a new cover on the ironing board.  (The harvest gold legs date it. I bought it in 1980, when we got married.) The attached pocket is for spray cans and bottles, according to the package, which stated in capital letters: DO NOT PUT IRON IN POCKET.  Okay, I won't! 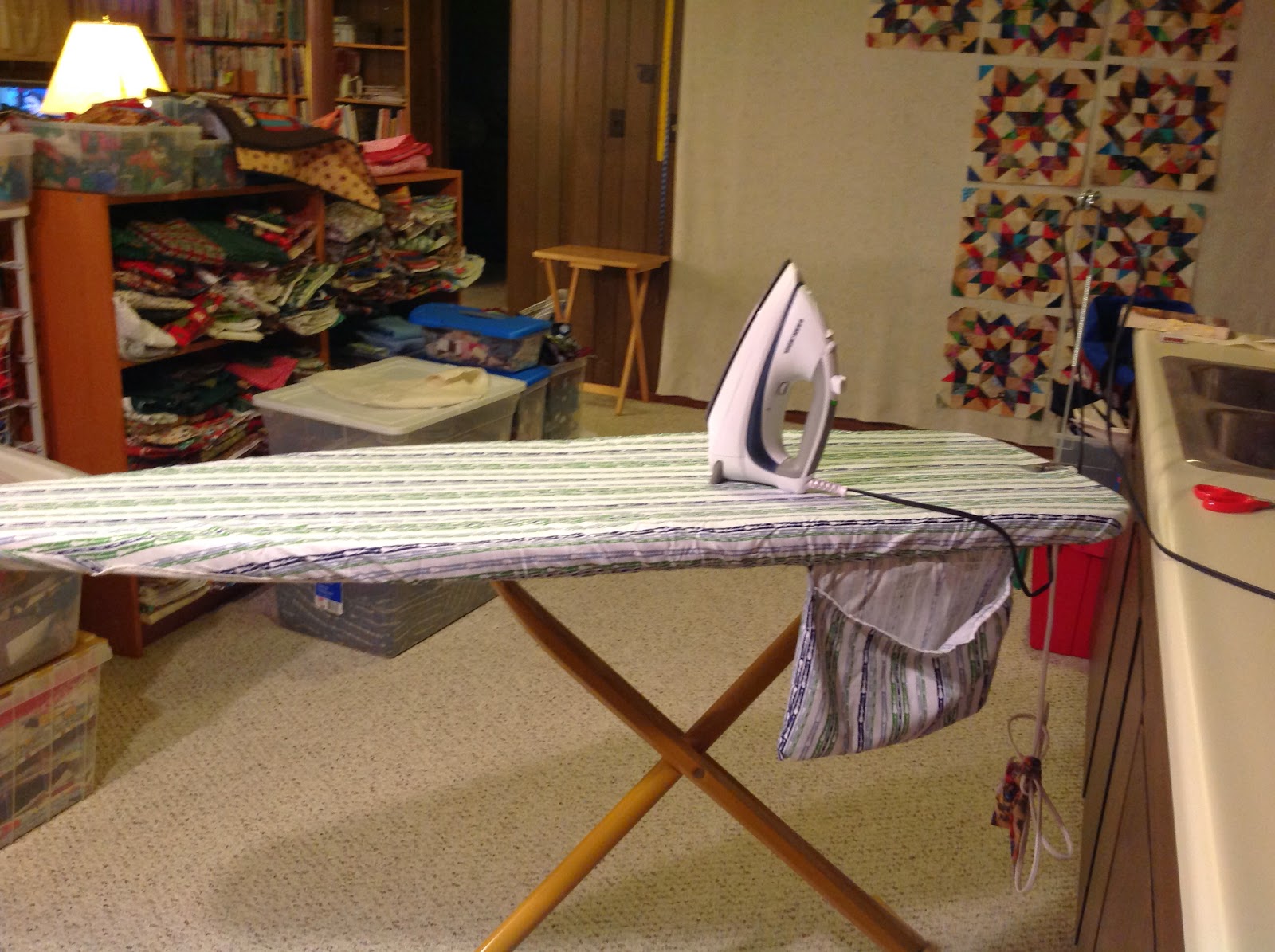 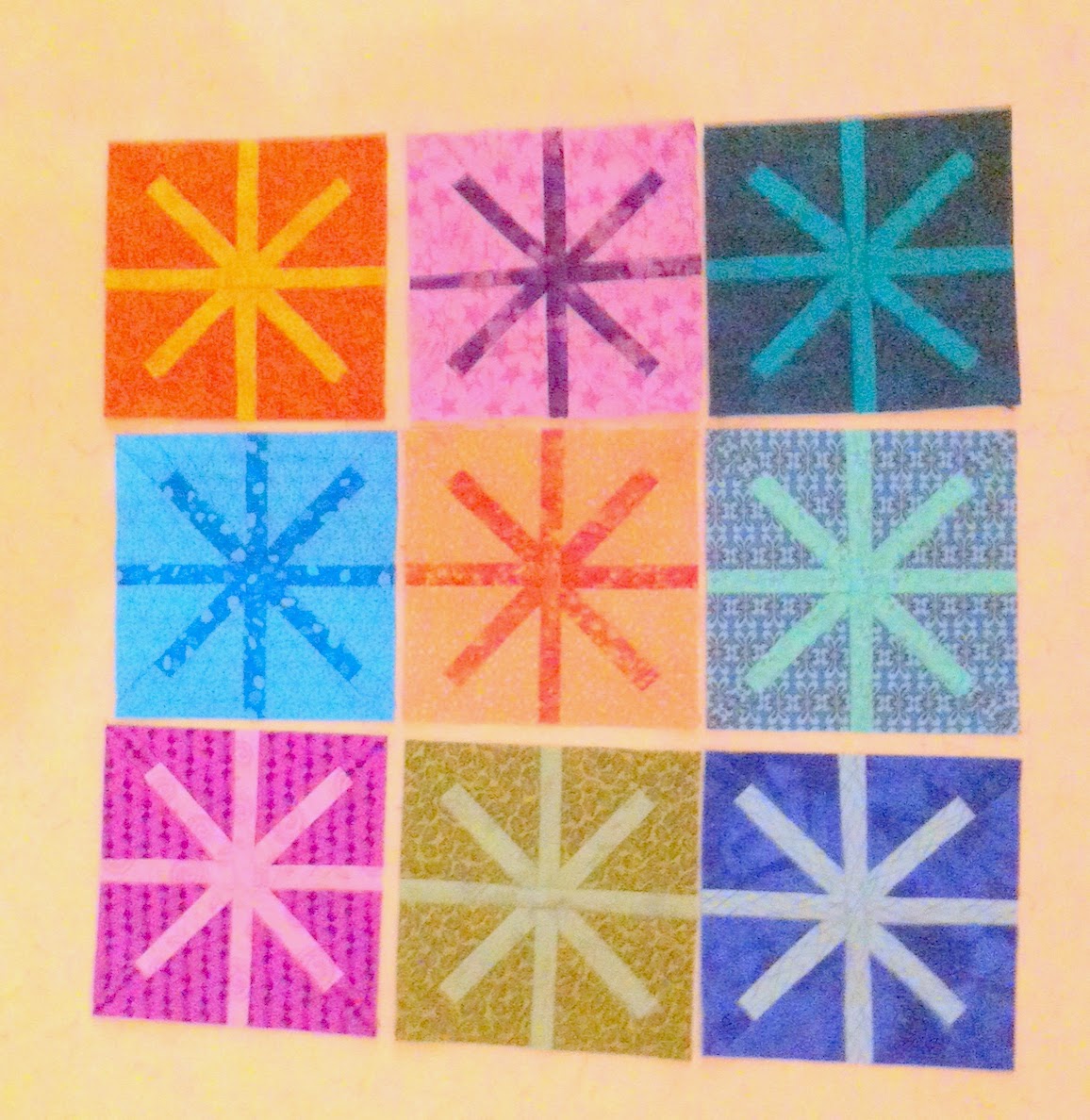 This month's Block Lotto block is "Spokes" in monochromatic colors. These were fun to make.

I have a quilt basted, ready to quilt. I have a box of flimsies.  I would like to make small pieces for a colleague's retirement (end of July) and a friend's wedding (end of August). This would be a good time to decide what I'll make for this year's AAUW Christmas raffle. The guikl show is in October and I need to contribute something to the silent auction.

Did I work on any of these?  Of course not. 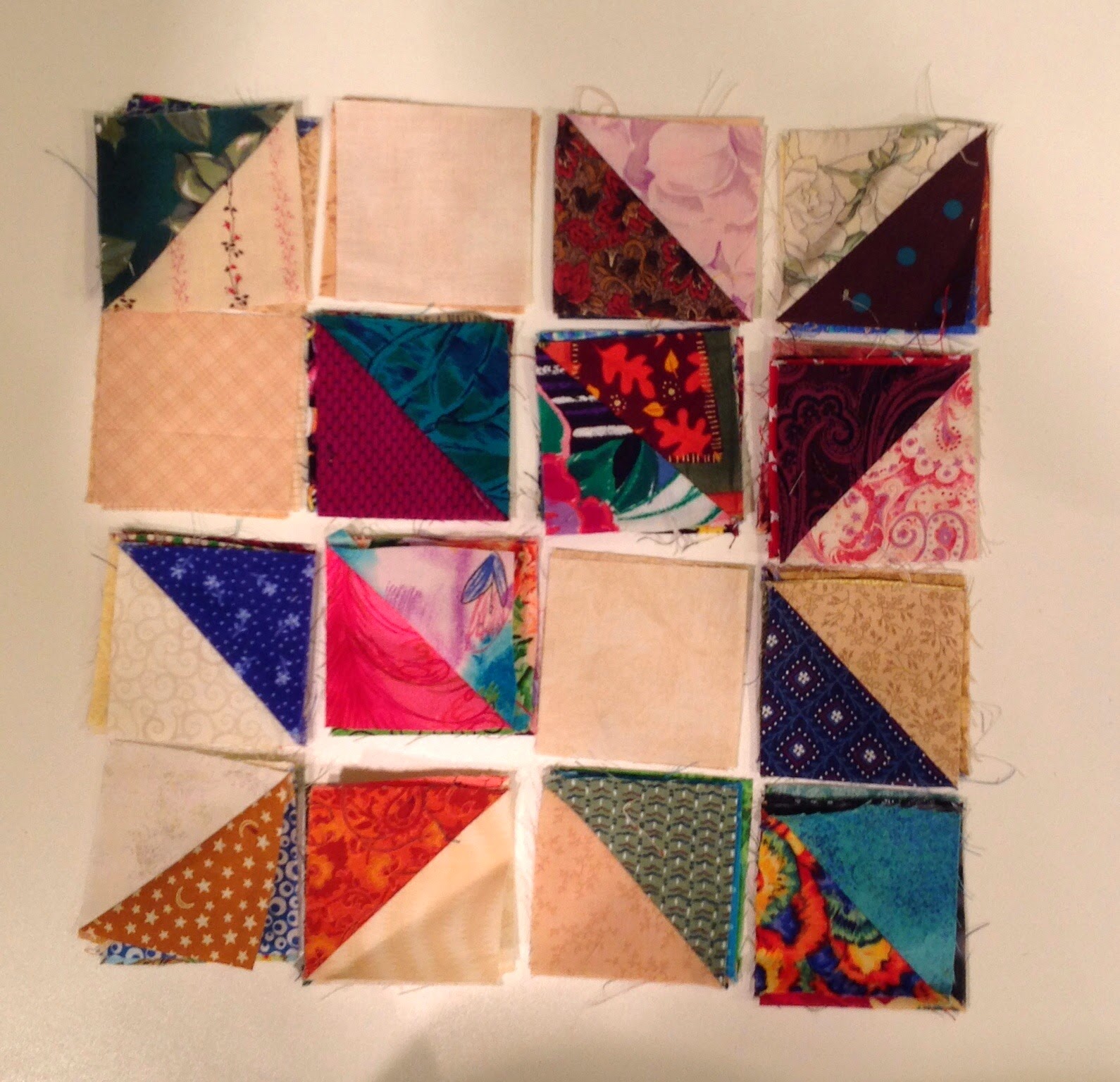 I always have pieces cut to use as leaders-and-enders. This week I sewed half-square triangles, cut from 3" squares. I make a bunch, trim them, and toss them in a shoebox.  The shoebox was pretty full. Underneath the shoebox was a "Buggy Wheels," a pattern by Buggy Barn that I downloaded some years ago.  No time like the present! The traditional block name is Carpenter's Wheel.  It is visually complex because there are so many pieces, but they are all half-square triangles with a few squares). Each block has four identical quarters. I charted one quarter so I could keep the piecing straight.  If I were really efficient I'd piece the units for all the blocks one unit at a time, which would require me to keep count (16 blocks times 4 quarters times units....)  -- but instead I'm piecing the units for four quarters (one block) at a time. 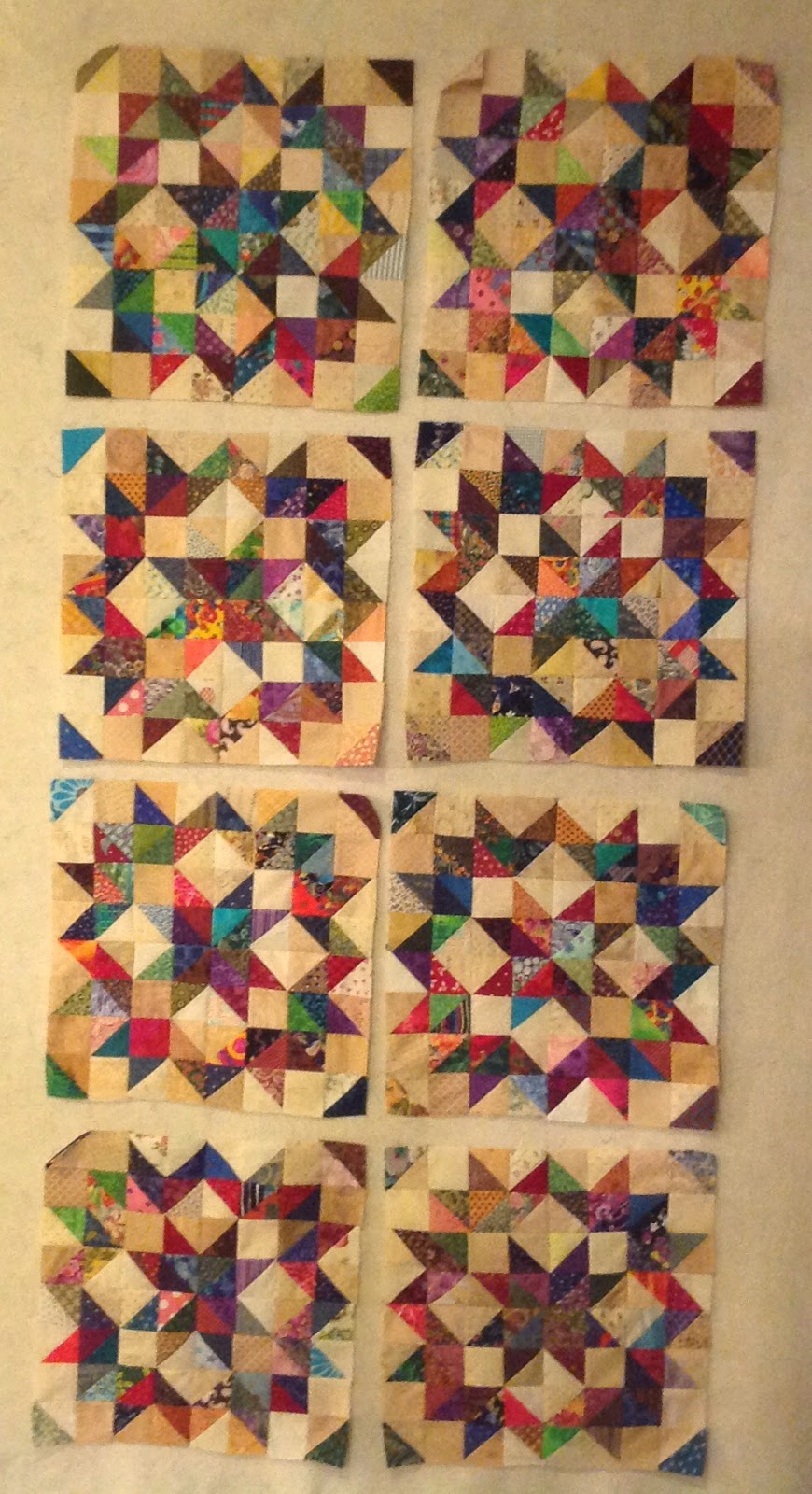 See what other quiltmakers are working on at Judy's Patchwork Times .
Posted by Nann at 8:21 AM 7 comments: 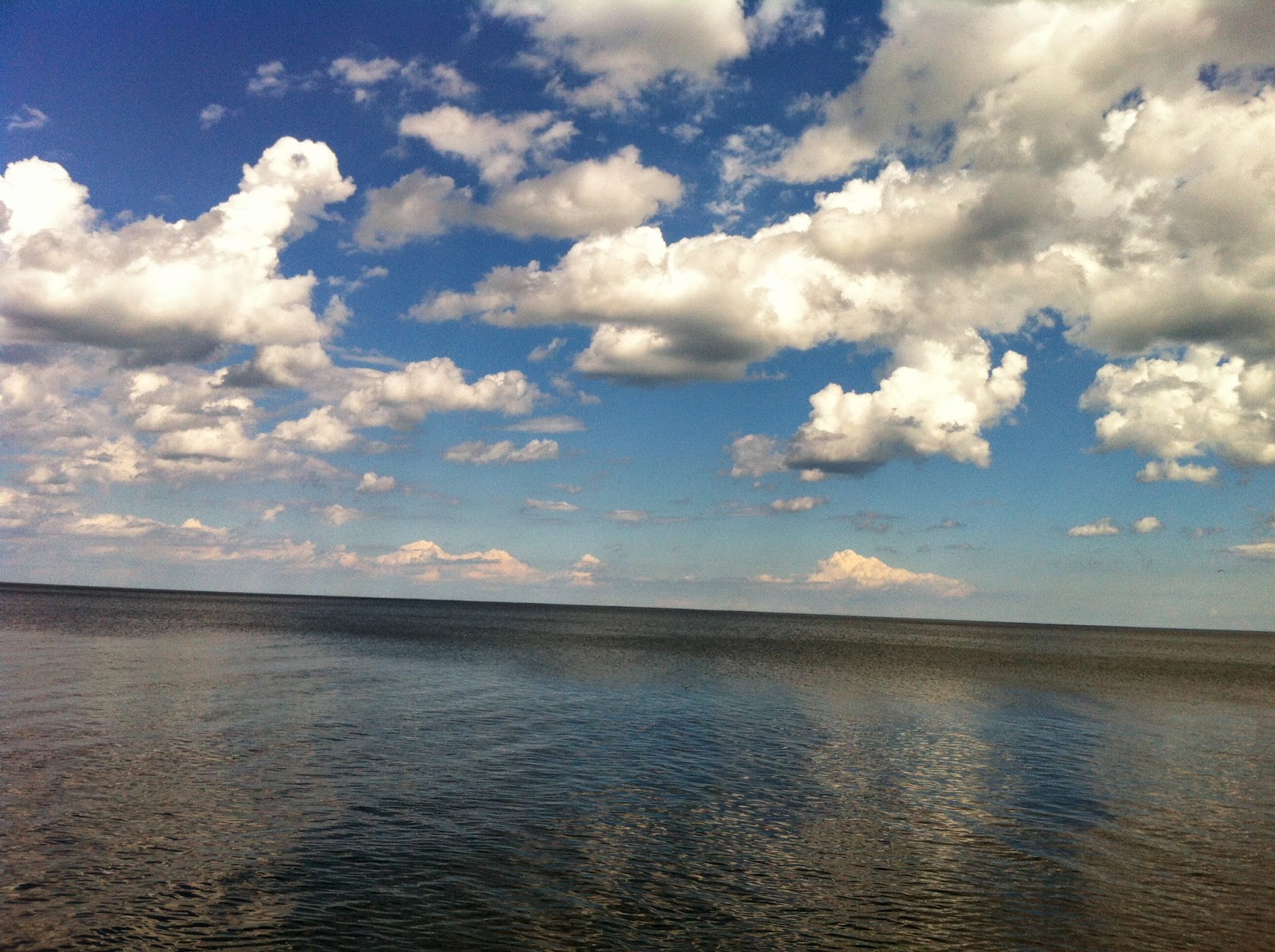 Rain has been plentiful this summer.  Fortunately it has fallen late at night or early in the morning while daytime is blue-sky-sunshine.  The down side to the rain is that there are lots of mosquitoes as explained in depth in this article published in the July 12 Chicago Tribune. ("We don't have a single mosquito in this town -- they're all married and have lots of children.")    I went outside very early a couple of days ago -- about 4:45, before sunrise -- and saw bats darting and flitting.

The up side is that the flowers are wonderful.  This week we went for walks at Illinois Beach State Park -- three times! (The joy of retirement with free time in the afternoon. 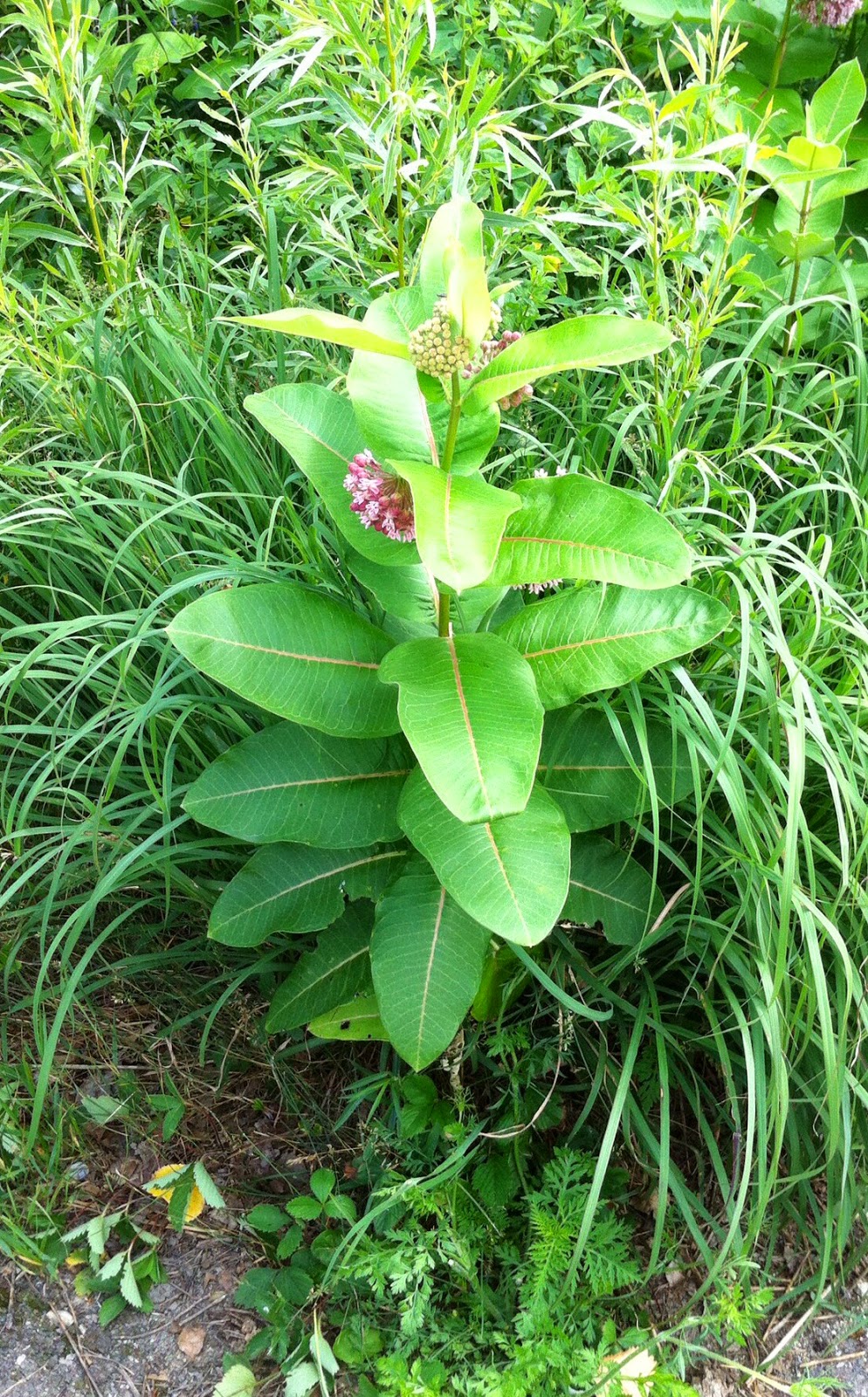 I keep looking for monarch eggs on the milkweed -- without success.

This guy was very visible on the gravel path but when he slithered into the grass he was camouflaged.

More than a photo op

The library received a construction grant earlier this year. The money helped with the cost to replace the computer network servers that were shorted out in a freak flood last September. (The air conditioning unit over the server closet backed up and flooded. No computers or internet for two weeks and a bill for over $125,000 to repair/upgrade and relocate the a.c. unit. Insurance paid $58,000.  The grant paid $19,000.)

We paid the bills last fall. We got the grant check in the spring and deposited it. Last month we (not me personally, but the interim director) got a call from the Illinois State Library saying that Secretary of State and State Librarian Jesse White would like to present a display check and would July 8 be all right?  The interim director asked if I could be there to receive the check since I'd applied for the grant.  Certainly. 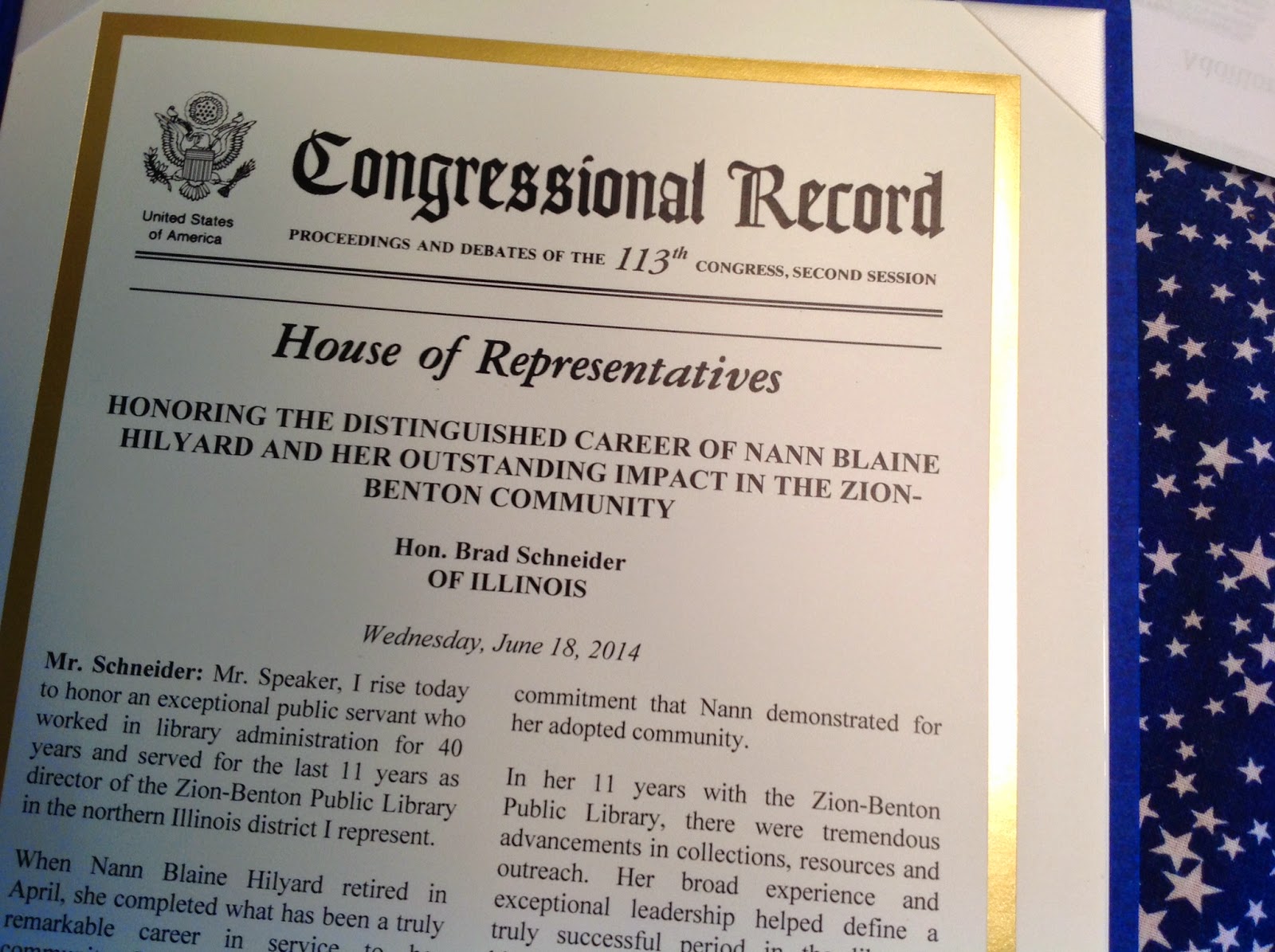 It turned out to be a bigger event than I anticipated.  The township supervisors, our state representative, and staff from the State Library and the Secretary's office were there. So was the district office director for our congressional representative. She had a pleasant surprise for me! 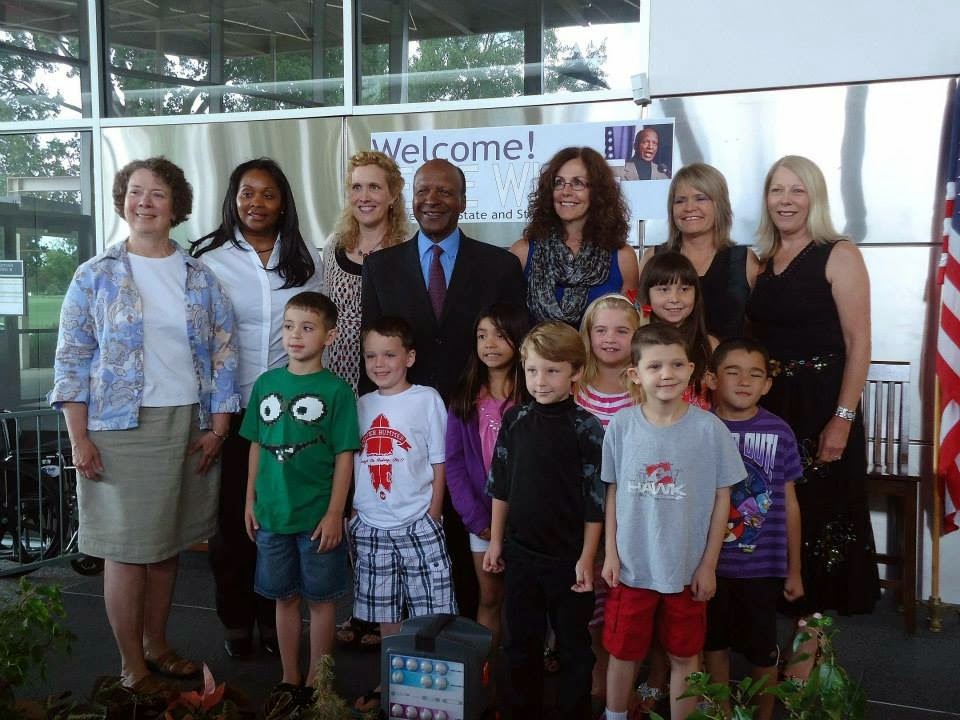 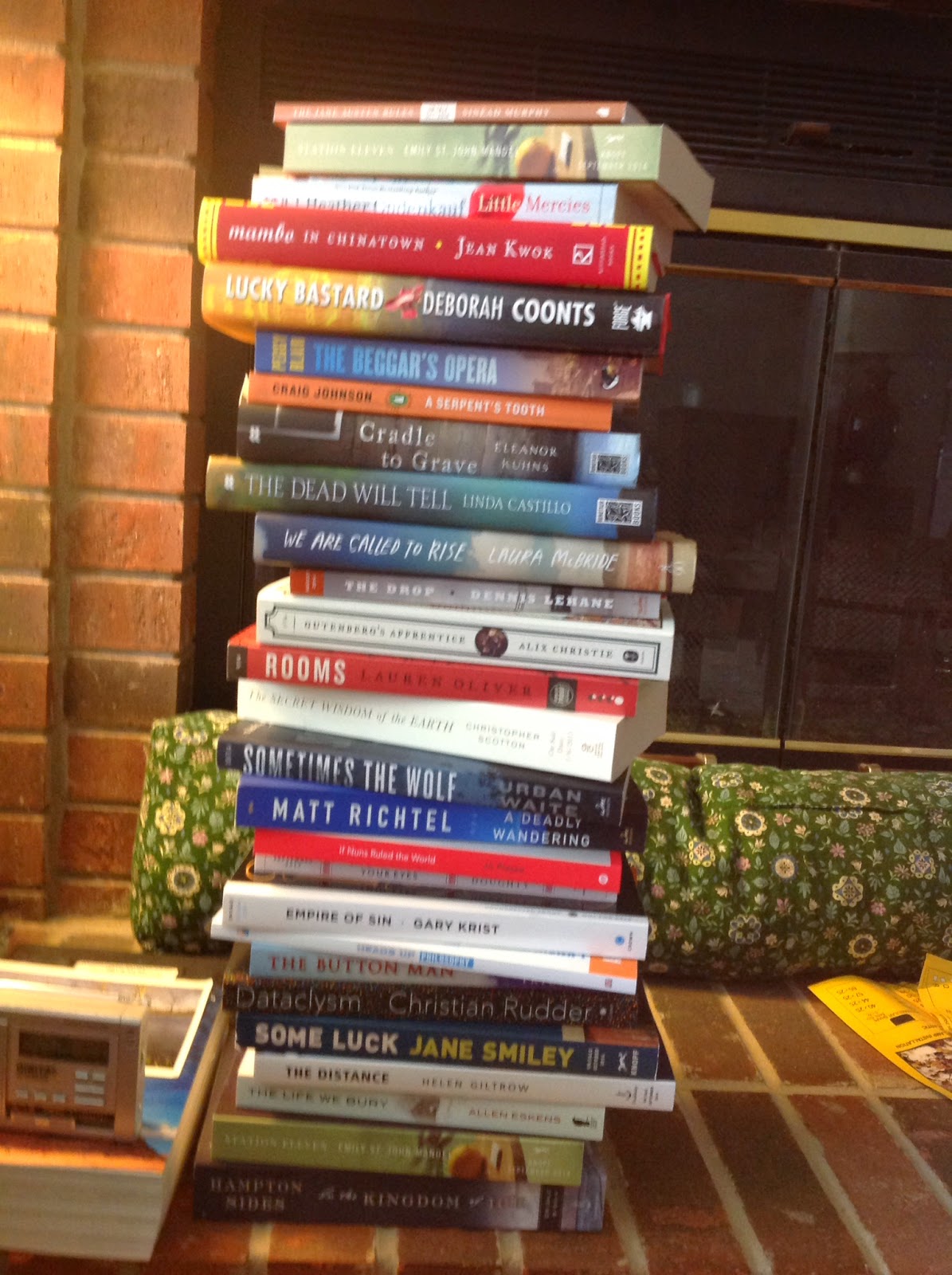 The box I shipped from the ALA conference (I had it sent to the library) arrived.  These new books and upcoming release will keep us occupied for a while.
Posted by Nann at 1:32 PM 1 comment: 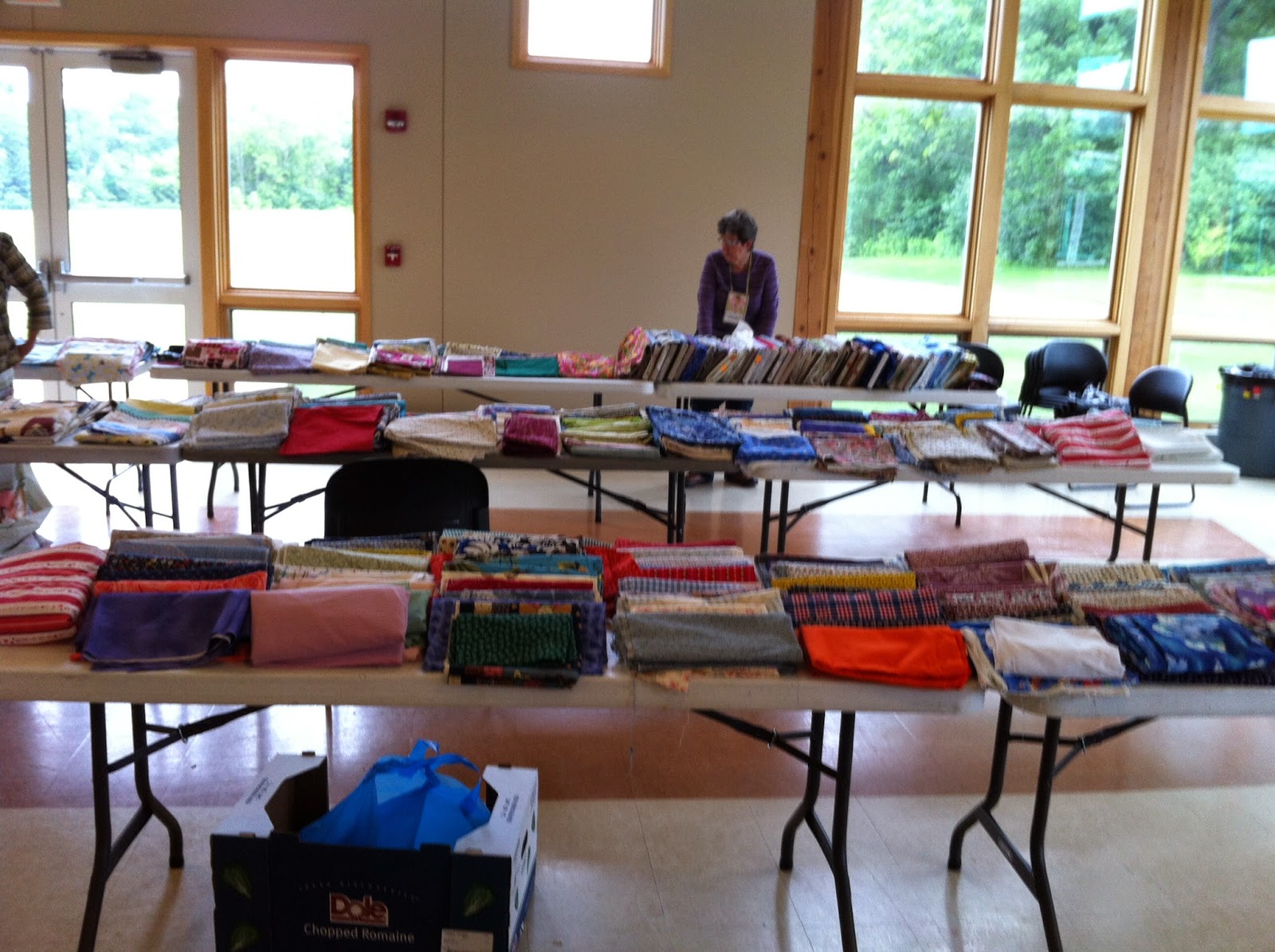 In mid-May I wrote this post  about the 1500 yards of fabric donated to our guild.  The donor's grandchildren were coming to live with her and she had to give up her sewing room and thus her stash.

The guild board agreed to sell the fabric to ourselves for $2/yd.  Here's a photo of the setup. 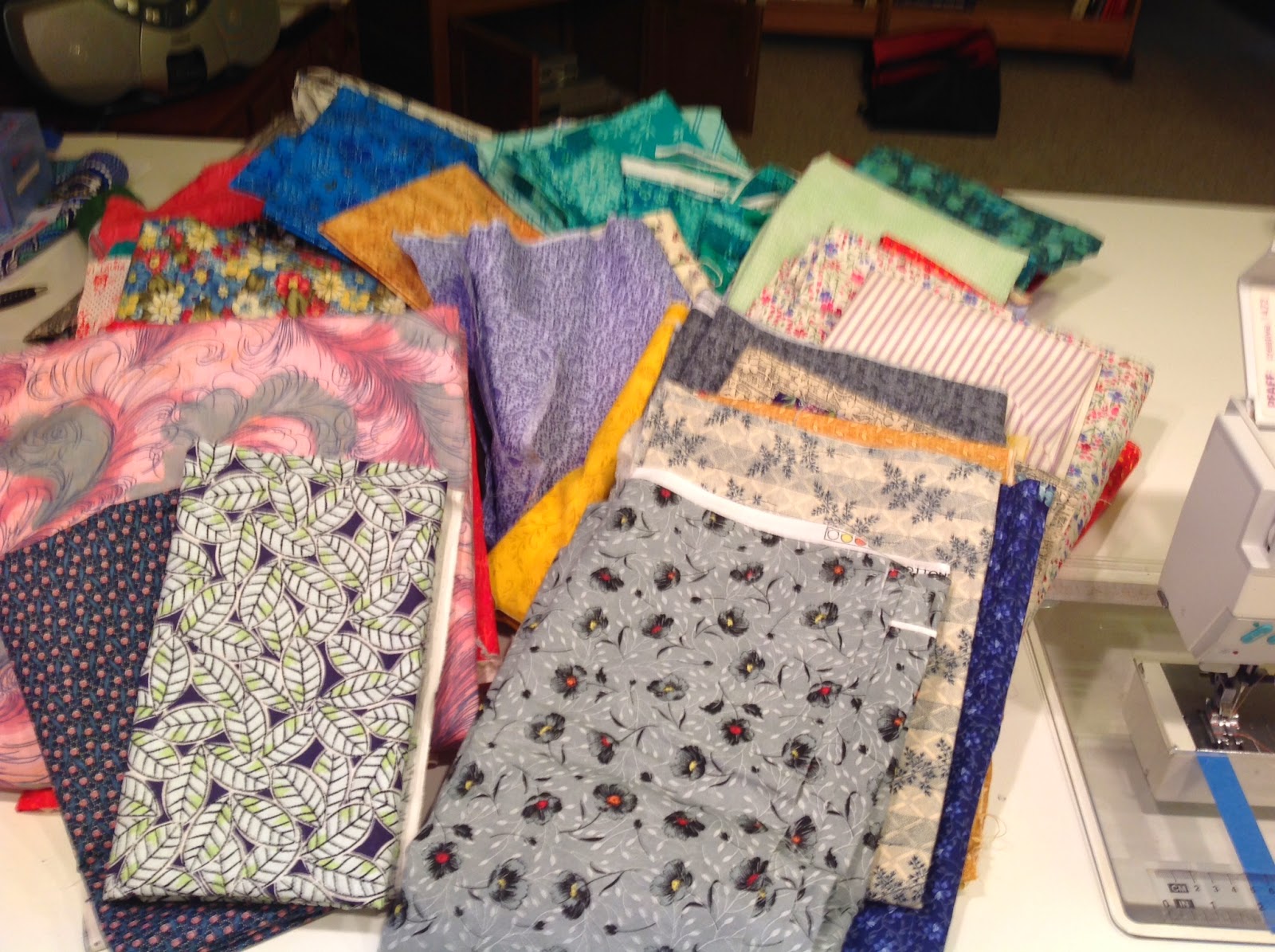 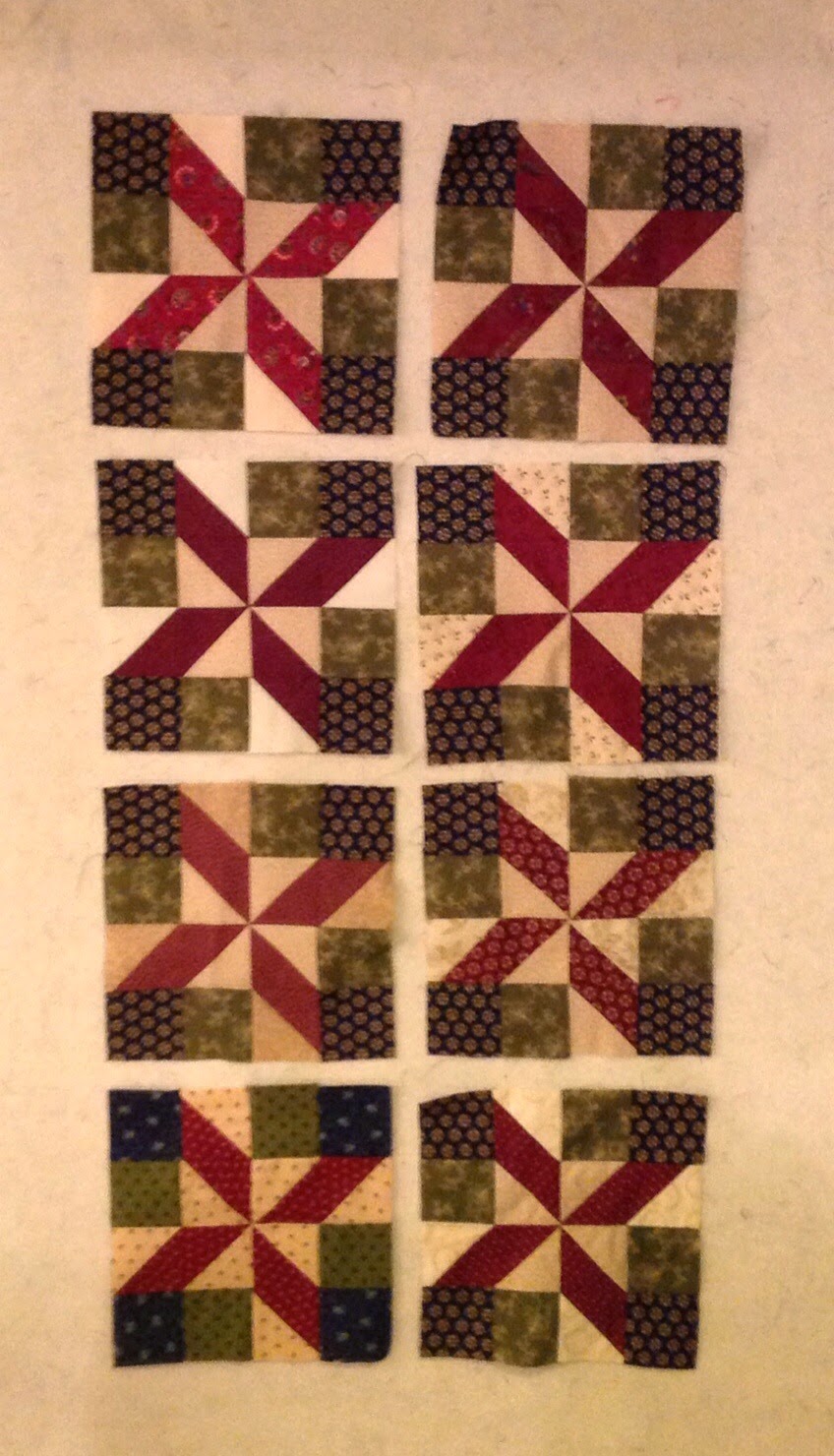 Other guild news:  I won the block-of-the-month!  Here are 8 blocks -- there will be 4 more coming in later. These Civil War Clay's Choice variations (12") may go nicely with the Block Swappers' recent CW 9-patch swap (6") 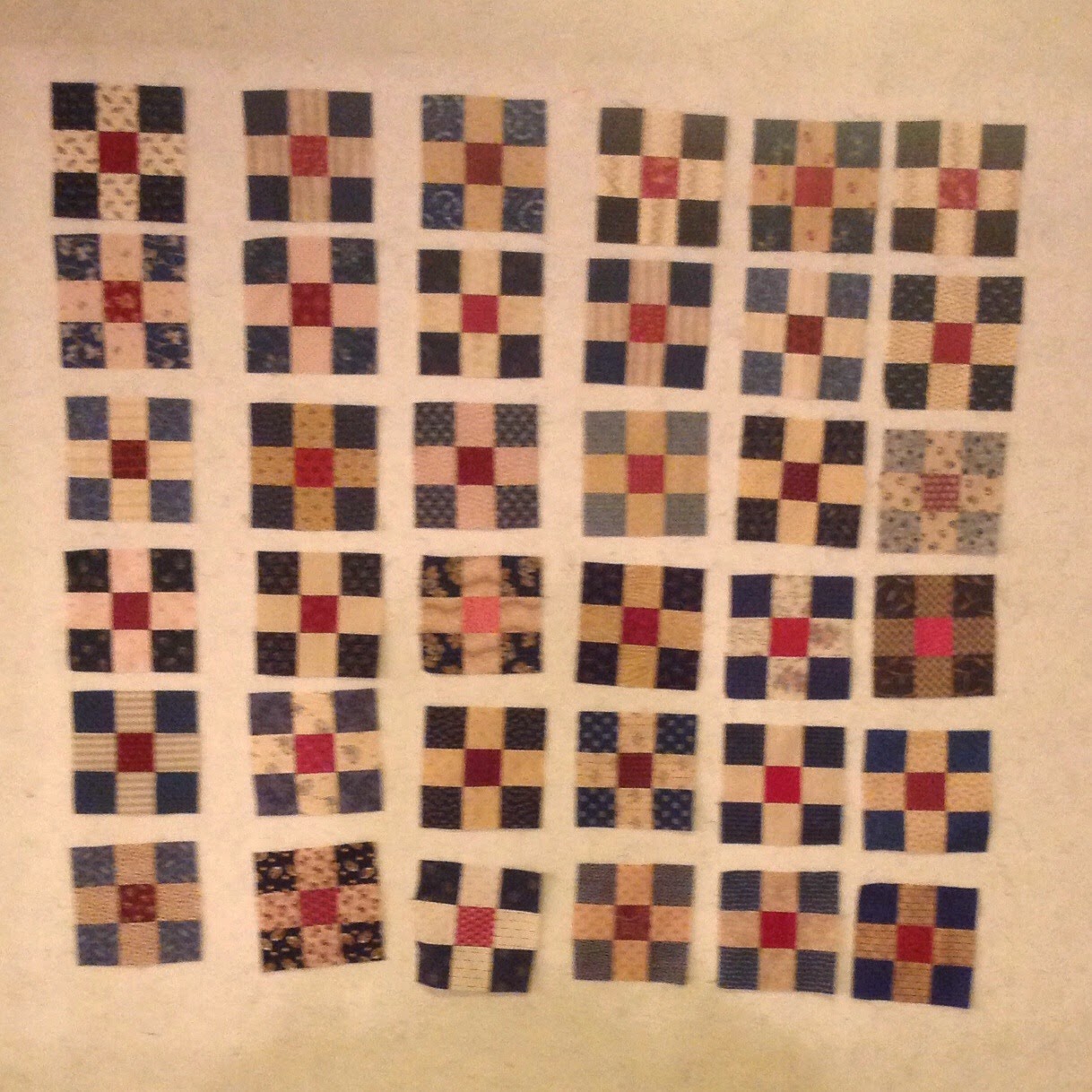 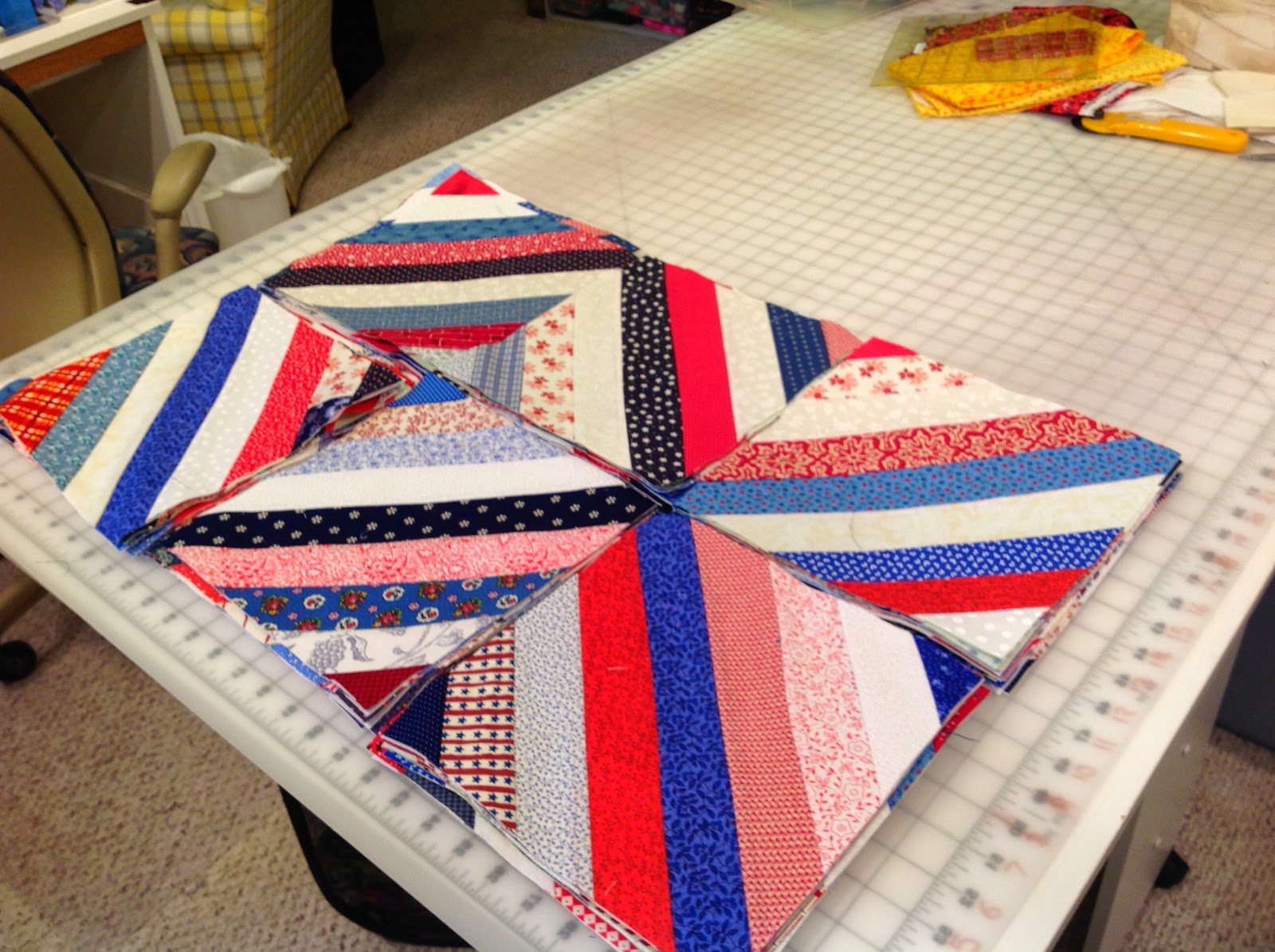 Here are 89 out of 96 blue-centered string blocks for the Heartstrings July project. The standard HS quilt has 48 9" blocks, so 96 will make two quilts.  I dug into a shoebox of pieces and strips of white-on-white and cream-on-cream -- good to use 'em up! 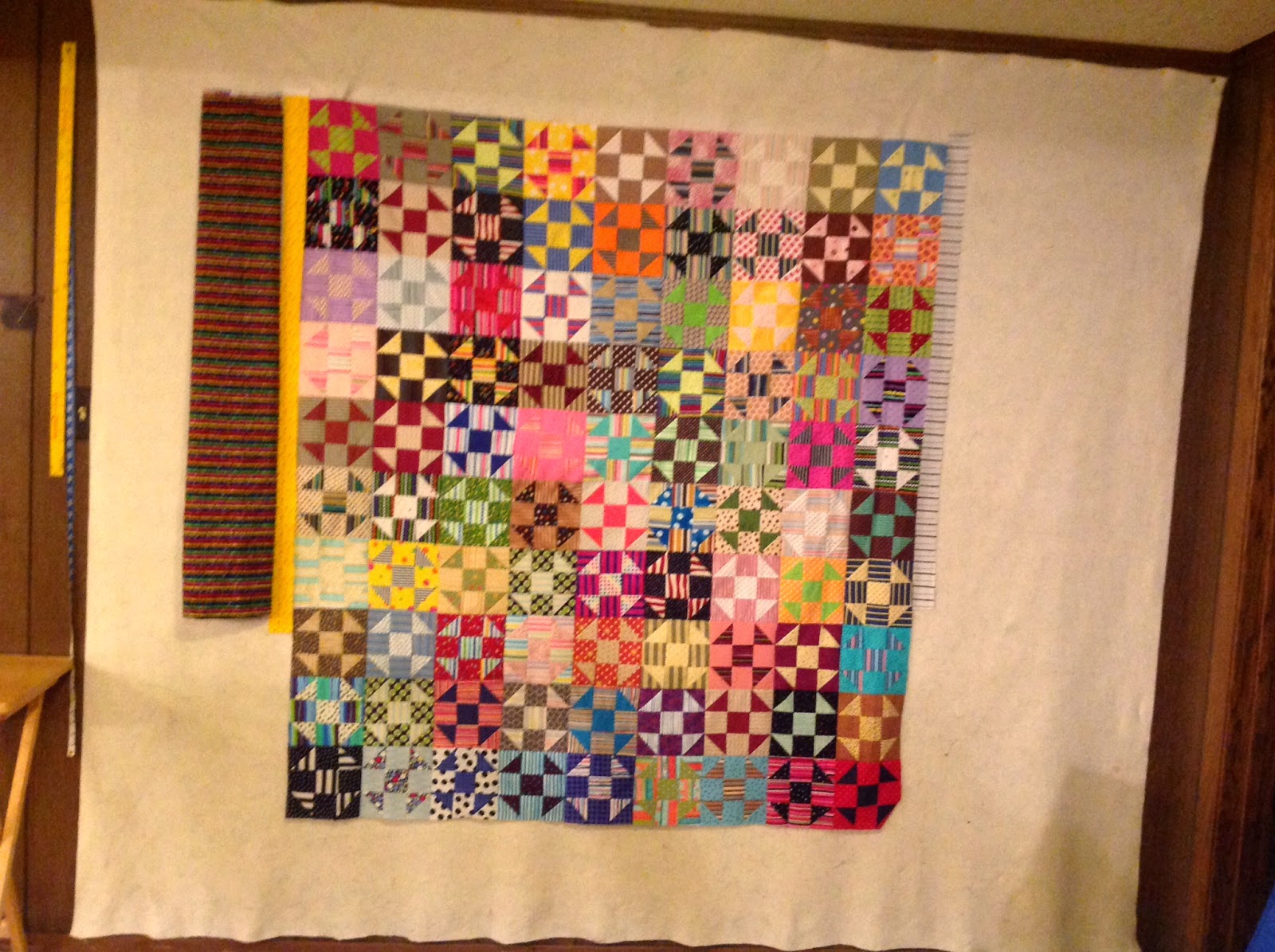 Speaking of swaps -- and since this is Design Wall Monday -- here are the dots-and-dashes Shoo-fly blocks from two Blockswappers swaps. I'm not committed to these borders, but the more I look at them the more I like them.  The black-striped border has little stripes of bright-with-dots.
I'm linking up with other quiltmakers at Judy's  Patchwork Times.
Posted by Nann at 11:33 AM 5 comments:

Las Vegas in June: "It's a dry heat," someone observed. "But so is cremation," was the response. I assure you that 105 is hot, regardless of the lack of humidity.  The American Library Association last met in Las Vegas in 1973.  Back then ALA had just over 30,000 members and 8,539 attended that conference.  Forty-one years later membership is about 56,000, and 18,500 attended the conference. (That's fewer than last year -- 26,362 in Chicago -- but more than 2012 -- 16,700 in Anaheim.)  This was the 31st annual conference that I have attended since 1984. (I missed 1991.)   Because I registered for the conference before I retired, my badge had the library's name. I made new business cards that identify me as "retired librarian, quiltmaker, community volunteer." It was odd not to look for programs that might have value at the library.  My schedule was fairly full with committee obligations and as it was I missed some speakers that I'd have liked to hear.

I did get to two of four sessions about   Libraries Transforming Communities .  This initiative aligns with what I practiced as a librarian and continue to seek "with strings attached."


The Best of the Best is a panel book review by members of the University Press Books Committee. I've served on the committee for many years and have chaired it the past two.   Committee members are public and high school librarians.  Each fall university presses send us their new titles that they think may appeal to public and school libraries. We are each assigned certain Dewey decimal ranges.  At Annual some of us -- four this year -- give book talks about the books we consider outstanding.  (This year I talked about Becoming Tom Thumb, by Eric D. Lehman, and Shadow Master: The Extraordinary Life of Pauline Benton, by Grant Hayter-Menzies.)  There were 32 people in the audience, more than we've had in the past. And I want to read several of the books that my co-committee members reviewed.)

There was time for fun!  On Thursday evening my roommate, Carol from Indiana, and I went to the MGM Grand to see Ka by Cirque du Soleil .  Neither of us had seen a Cirque performance before and this was magnificent -- the acrobatics, the dancing, and the stage set.  We had great seats.

On Saturday evening I had dinner with family friends Beth and David. They knew Stevens and me when we were courting (Pittsburg, Kansas, 1980).  They moved to Texas and then to Florida and last year retired to Henderson, Nevada.  Their daughter Dana, son-in-law Matt, and grandchildren Lia and Max were there, too, as well as their SIL's business partners.  Matt is an academic librarian who created Pictoscope , an online discovery index to digitized pictures. (Pictoscope had a booth in the exhibit hall.) It was a lovely evening in the good company of long-time friends.

I manage to work quilting into everything, of course.
The ALA Biblioquilters contributed ten quilts to this year's scholarship auction.  Bidding was up to $3430 at 10:30 Sunday morning. The auction closed that afternoon and I need to find out the final prices.

I donated "Crossed Stars," made from blocks I won at Block Lotto. 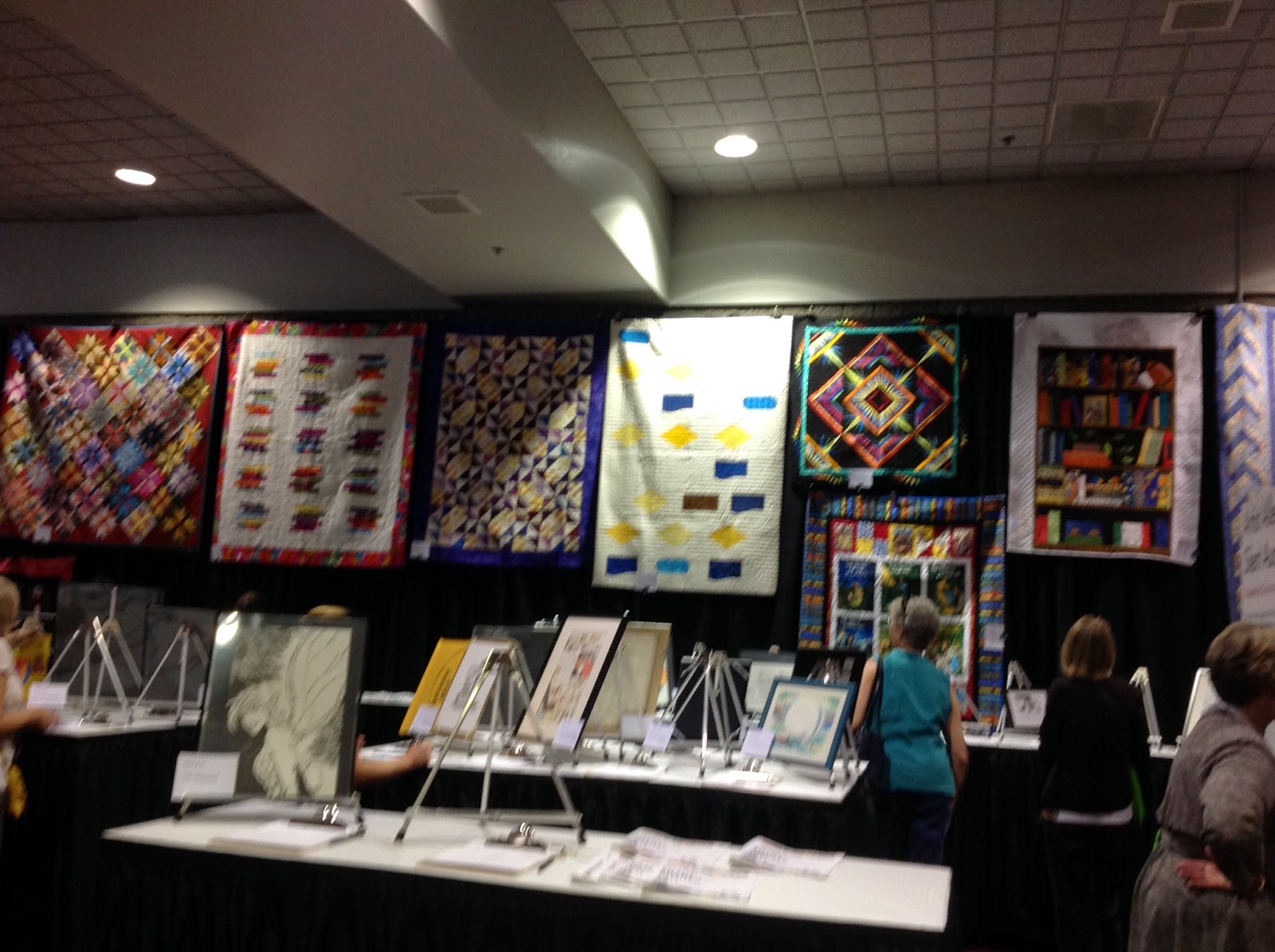