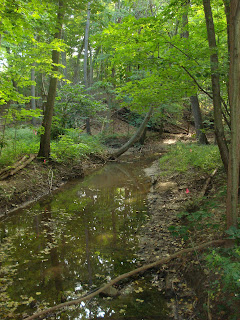 There was a community clean-up day for the ravine trail. (We weren't able to participate.)  A lot of fallen leaves were raked away and downed limbs were cut up.  Many trees were tagged.  I assume the tags indicate trees to keep, but I will have to verify that.

Most of the wildflowers have gone by, though I did see one sprig of phlox in a sunny spot.   A heron lifted off from the creek but he was too quick for this photographer.

Trailville.com has a wiki page about this trail.  It does not mention the creek, which I erroneously called Kellogg Creek until I looked it up.  It is part of the
Kellogg Creek subwatershed of the Lake Michigan Watershed -- but it is Dead Dog Creek.  How did it get that name?  I will have to look that up. 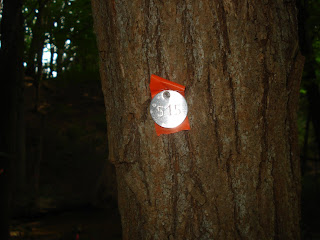 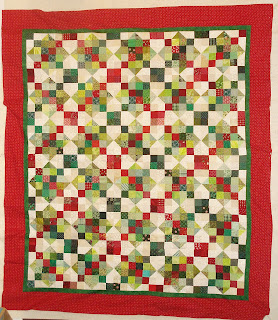 I bought backing fabric for both (nine yards total). I didn't have the energy to make pieced backings from what Christmassy reds and greens I have in my stash. 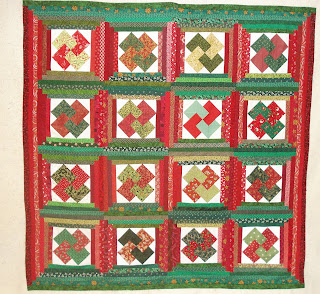 It started with Sir Francis Drake.  My mother probably purchased this Toby jug when she worked at Marshall Field's before I was born.  I'm sure it was expensive at the time.  Years later she added Sairey Gamp and Auld Mac. Were they new purchases on a trip to England or an estate sale find?  I don't know, but I inherited all three. 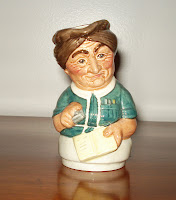 Mrs. Loan, the librarian, was one of the "Doultonville" characters introduced in 1983.  Mother gave her to me one Christmas. 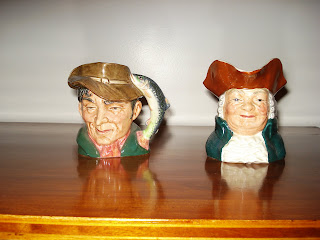 I got The Poacher (also Doulton) and this 18th century gentleman (Kelsbro Ware....no character name) in 2006 at an antiques mall's closing sale.  (Asking price for the Poacher was $95 and for the gent was $39.  I paid less!)   The gent's hatbrim is shaped in such a way that he's probably a cream jug.

I went to an estate sale in nearby Beach Park on Thursday afternoon.  I had $62 in my wallet....and I spent it all!  Two hankies (.50 each) and these three Tobys:  Mr. Pecksniff (by Beswick), Mr. Micawber (Lancaster & Sandland), and another Sairey Gamp. 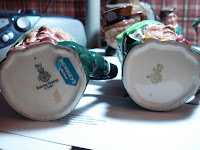 It's interesting to compare the two Saireys.   Mother's, on the left, looks to be the newer.

With eBay and other online sales it is easy to acquire a collection.  It's more fun to rely on serendipity!

Three rails it is 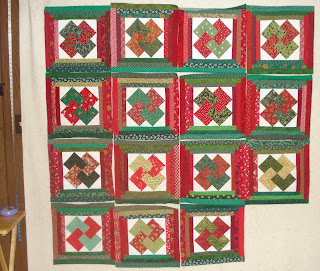 I appreciate everyone's advice for setting these blocks. (I am waiting for two more to come from this swap.  I don't know which block will be pieced into the back if I stay with a 16-block layout.)

A pattern called "Simple Stars" in Time-Crunch Quilts by Nancy Martin inspired this setting. I looked it up and was reminded that she set the blocks so that one color was horizontal and the other vertical.  It's more effective than alternating the color direction.  Nancy's quilt is bordered with three strips on each side with the same color placement.  I may copy that...or I may not.
Posted by Nann at 7:10 PM 1 comment: 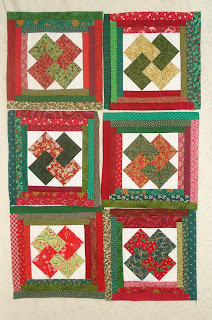 Is the white background of the Card Trick blocks overwhelmed by three rails?  Should I just use two rails instead?   Should I work in some more white (a skinny inner border)? 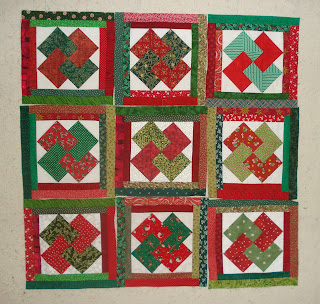 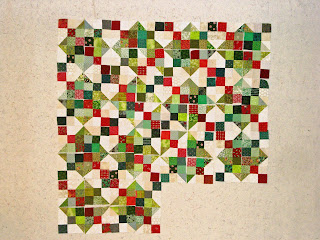 I couldn't make any decision about the blocks that were on the wall last Monday so I turned to another project.  This will be the ZBPL holiday raffle quilt this year. There are four other sewists/quilters on the library staff and I invited them to contribute these split 9-patch blocks. (I need to give them a nudge to find out how many they've made.)  The design I drafted in EQ7 calls for 120 6" blocks, 60 with green chains and 60 with red chains.

I know that three of the blocks are turned the wrong way.
Posted by Nann at 9:43 PM 17 comments:

Live with more books than you read

Copied from
http://www.shelf-awareness.com/issue.html?issue=1525#m12959
Quotation of the Day

Good Advice: Live with More Books than You Read

"He should live with more books than he reads, with a penumbra of unread pages, of which he knows the general character and content, fluttering round him. This is the purpose of libraries.... It is also the purpose of good bookshops, both new and secondhand, of which there are still some, and would that there were more. A bookshop is not like a railway booking-office which one approaches knowing what one wants. One should enter it vaguely, almost in a dream, and allow what is there freely to attract and influence the eye.

"To walk the rounds of the bookshops, dipping in as curiosity dictates, should be an afternoon's entertainment. Feel no shyness or compunction in taking it. Bookshops exist to provide it; and the booksellers welcome it, knowing how it will end."

--Economist John Maynard Keynes, as quoted in a Canberra Times piece headlined "Bookshops about more than just purchasing
Posted by Nann at 8:34 AM 2 comments:

My short career as a race driver

The Boys & Girls Club has a Golf Cart Race fundraiser. Businesses and organizations pay to enter and designate drivers. The "track" is a block on Shiloh Blvd. in Zion, adjacent to the weekly Farmers' Market. This year there were about 29 drivers who competed in heats of 3 or 4. There was a semi-final round and then a final. I represented Rotary, despite my disclaimer that I had never driven a golf cart before -- and I won!
Rotary won last year, as well, so our participation in 2012 is inevitable. ﻿﻿ 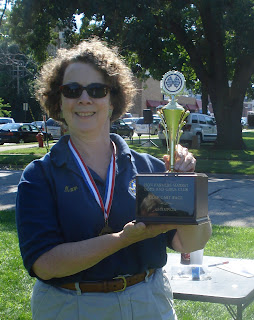 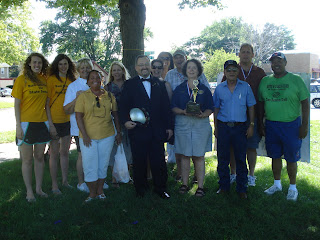