Friday check in: cranes, art show, and a finish

As my friend Steffi and I left the country club [see below] two sandhill cranes strode over the hill and across the sidewalk. They are making their way north to Wisconsin.  They were intent on one another and I was able to get within ten feet to snap the photos. 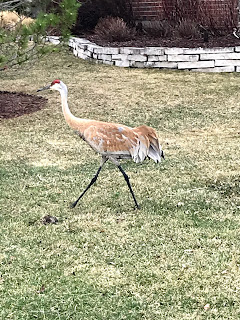 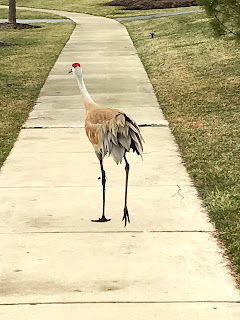 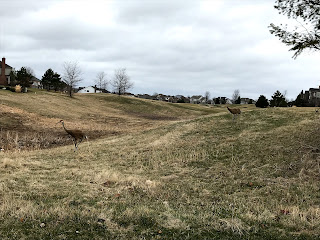 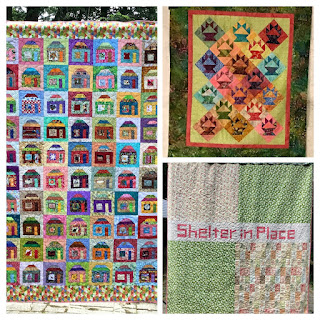 GFWC-IL District 10 (General Federation of Women's Clubs-Illinois) held its annual Art Show luncheon on Wednesday.    The country club dining room was spacious and the tables were far apart.  Each table was set for six people (though the tables would ordinarily accommodate eight) so we were spaced.  It was SO nice to meet in person.   Most years there are multiple entries in each art category.  I entered Shelter in Place in "quilts" -- the only entry -- and Cake Stand  in "embroidery, needlework, wall hangings" -- the only entry.  That's a sure-fire way to win a prize -- LOL!  But the judges declared that Shelter in Place was the grand champion, and I had the opportunity to explain how SIP came about.  [ Here -- and previous posts labeled "Shelter in Place."] 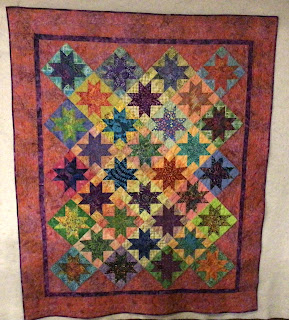 In the studio:   I finished quilting the batik variable stars. Once again I observe that a quilt with no deadline and no destination comes together easily. 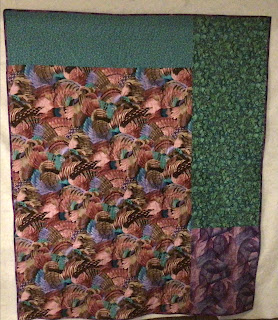 Many, many years ago I bought a fat quarter of the riotous Alexander Henry feather print.  I had no idea what to make out of it -- I think I chopped it up into squares for a swap.   In 2020  a nearly two-yard piece of the feather print was in one of the two destashes with which I was blessed.  I had to use it in its entirety!

After I finished the quilting I realized I should have pieced the back so that the long horizontal teal piece went at the bottom.  Too late now.

Linking up with Finished or Not Friday and Can I Get a Whoop Whoop?

Labels: Can I Get a Whoop Whoop, Finished or Not Friday, GFWC, sandhill cranes

congrats on your well desered win nann....you totally inspire me with your projects...

Lovely Variable Stars quilt, Nann !! I am the opposite ..... with a deadline and a purpose, I can get er done.

Congratulations on your well deserved wins.

My son's guess was "emu" but then he's never seen a crane or an emu so just went with the category of "big bird".

Congratulations on the award! Much deserved. Aren’t those cranes magnificent!

I understand the no deadline thing. Mine come together quickly too! Batike stars looks lovely.

Congrats on winning Grand Champion in the Art Show, Nann! Such an honor when quilts often get overlooked in that kind of event. Pretty new quilt finish, too!

Well definite Congratulations on that win!!! how awesome! and people and gathering - I bet your senses were overwhelmed haha! Glad you got those cranes - how cool are they?

Meeting in person - who could have guessed a year ago that we would get so excited about that? Our quilt guild is going to meet on Saturday for the first time since last summer. We met outside in a park last summer, but couldn't find anywhere indoors that would allow our group in without charging a small fortune for "sanitizing". But one of the churches in town has allowed us to meet. Can't wait to see some of those ladies again!