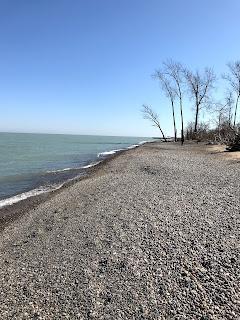 A nor'easter battered the lakeshore late last week. It would be cool but foolhardy to be at the beach during such a storm. Instead I visited two sections (Camp Logan and Hosah Park) on Saturday and Sunday when it was sunny and calm. 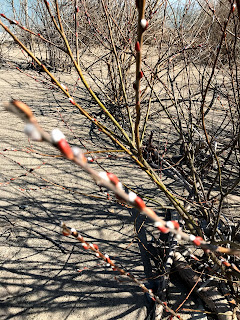 Salix discolor -- aka pussy willow or glaucous willow -- is in bloom. 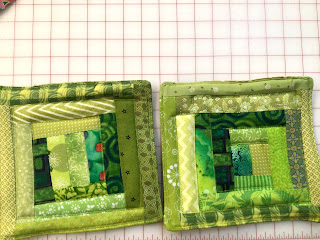 I made two green potholders for Joy's Table Scraps Challenge.  That's a subset of the Rainbow Scrap Challenge.

I pieced the backing for the batik stars flimsy I made earlier this month.  I got it sandwiched and basted and I've begun the quilting. 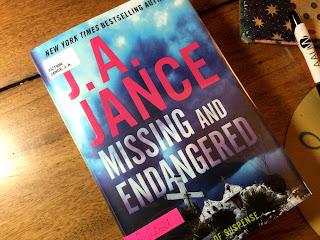 Missing and Endangered is the latest in J.A. Jance's series about Joanna Brady, sheriff of Cochise County, Arizona. Like other long-running series, it's somewhat formulaic but there is a comfortable familiarity with the characters.  Joanna balances running the law enforcement department with being a mother and wife.  She is dealing with two cases:  investigating the murder of a local man (of course it's not as clear-cut as it seems to be) and the cyberstalking of her daughter's college roommate. 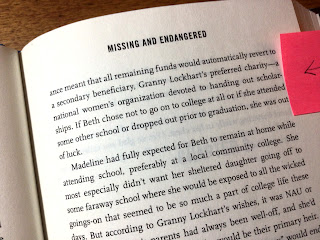 I noted this passage and emailed J.A. Jance asking what the organization is. She replied a few hours later:  "Thanks for writing and thank you for being a long term fan.  The organization I had in mind was P.E.O.  I’ve done several live events and a couple of zoom fundraisers.  As a high school senior, I received a college scholarship that made it possible for me to attend the University of Arizona.  Although my scholarship wasn’t from P.E.O., I really appreciate what they do."  Her Wikipedia entry says that at book signings she asks that donations be directed to various causes -- some $250,000 raised over the past decade! I shared this on the P.E.O. Sisters Facebook group and someone from a Phoenix-area chapter said that Jance has been the speaker for their annual fundraiser. 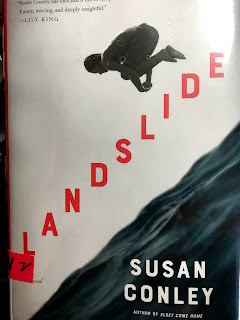 Susan Conley's novel Landslide is a compelling page-turner in a much different way as she describes how a family deals with a crisis.

One autumn in Avery, Maine: Jill Archer is trying to hold things together. Her husband Kit sustained severe injuries in a fishing accident and is hospitalized in Halifax, a seven-hour drive away. Jill's worry about Kit magnifies her worries about everything else: loss of income, housing, the decline of offshore fisheries, her sporadic work as a documentary film-maker, her ailing parents in a northern mill town. But foremost is her worry for their teenage sons Charlie and Sam. They are manifesting their own fears for an uncertain future mixed in with just being 16 and 15. Charlie has a girlfriend. Sam is in a band, is smoking pot, and blowing off school.The first-person, present tense narration emphasizes the emotional waves (to use an ocean metaphor): there's a crisis, then a too-brief calm, and then Charlie or Sam or Kit says or does something and Jill must keep paddling to keep from being swamped.
# # # # # # #

Linking up with Oh Scrap! and Design Wall Monday

Like your pot holders! I’ve been making some but using orphan blocks, especially single ones. Good to get them into use! Spring is coming! We have a bunch of crosses in the yard! So welcome !

Crocuses in the yard!

Oh, I love those potholders. They are in my favorite color---sooo pretty!
I have read a lot of books by J.A. Janice and enjoy them a lot, but I haven't heard of the second author.
I am reading a book now by V.C. Andrews called Heaven. It is really sad.It is about Mountain people. There are five kids, mother, dad, and the grandparents all living in two rooms. The dad doesn't stay home much and they are living in poverty. After the grandmother dies, the mother leaves so the dad sells the kids. That is as far as I got.

I've never read Jance but will look her series up. How good to move your quilt tops along and still have time for some hikes. The live oak are putting out new leaves here.

Thanks for playing along with the Table Scraps Challenge, Nann! One of your pot holders has one of my favorite GREEN scraps. That green on green stripe in the one on the right. See it? That's the one... LOVE it!! How many times CAN the word one be used in a single comment?! :P

I like the potholders - I haven't thought of making them from log cabin squares. Good idea. Thanks for linking with Design Wall Monday, Judy