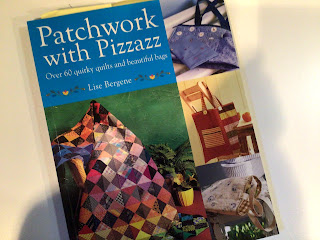 I've had Patchwork with Pizzazz for more than a decade. (Author Lisa Bergene is Norwegian.  The original title is Kreative Lappe Ideer Vesker og Bager.)  I pulled  the book off the shelf a couple of days ago and one of the designs began to jump up and down and holler, "Try me!"  I couldn't resist. 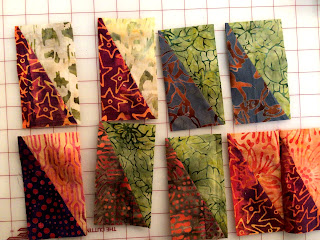 The blocks use split rectangle units. I have probably made them sometime along the way but I know I haven't used them as a significant component of an entire quilt.  I remember being put off by the fussy tedium of the bias rectangle method (That Patchwork Place).  But, ah-ha!  I bought the Studio 180 Split Rects ruler at a quilt show. Time to take it out of the package and use it. 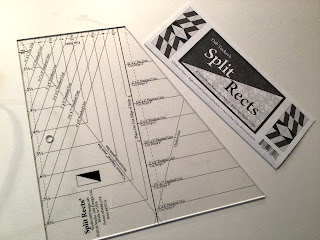 The ruler makes the units a breeze.  Even the trimming was easy.  I foresee using this ruler and these units often. 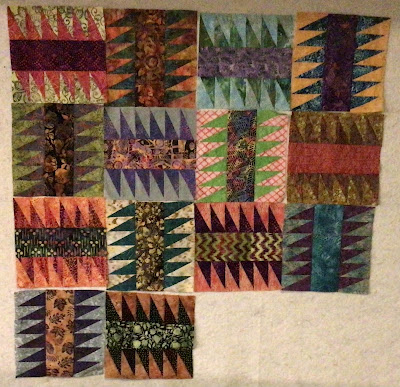 My reading certainly takes me to a variety of places. Last week it was Maine.  This week it's Montana.

Buffalo Jump Blues is the fifth installment of Keith McCafferty's mystery series featuring Sean Stranahan (a fly fisherman, guide, and water color artist) and Marcia Ettinger, the sheriff of Hyalite County.  There are both regular and new characters--charming misfits and the bad guys.  This case has a real (illegal) buffalo jump that purports to recreate those carried out by the Plains tribes before horses and guns.  There's a lot about the factions for bison management (what happens when the protected bison in Yellowstone wander out of the park?).  It's an intriguing mystery and informative as well.

On our 2016 Rocky Mountains Road Scholar Trip (here) we went to Head-Smashed-In Buffalo Jump in Alberta, now a Unesco World Heritage Site.  (In French: "Le Precipice a Bisons Head-Smashed-In.")  Each year the Blackfeet rounded up buffalo and drove them over the edge of the cliff. They then butchered the buffalo to provide food and hides for the coming year. There are  other buffalo jumps across the plains, but this one has the best archaeological record. 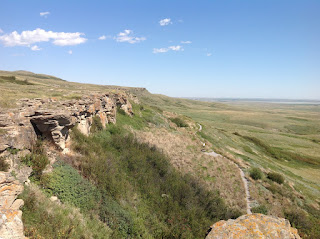 Wow I had never heard of such a thing.will have to google and read more.

nice quilt in progress....i've seen a few with the split rectangle pattern and like them all...i thought the idea of the buffalo jump was quite inventive...

That’s an interesting pattern. And I think I have that book somewhere, too 🙂

I have that ruler on my “to buy” and try list. I greatly appreciate and use the Studio 190 rulers. Your blocks look like a lot of work but they are unique and interesting. Yikes poor Buffalo but ingenious hunters. I believe I’ve read about other “jumps” before. I’m a fan of Buffalo meat too.

What a cool looking quilt you have coming together! Those older books are great sources of inspiration, don't you think? It's so fun to see how different the projects look when made up in today's fabrics. Thanks for the tip about the ruler tool, too.

Those are FUN blocks and fun fabrics in them! The ruler would definitely make them easier to make.

Terrific looking quilt in progress! Very different. That’s a ruler I don’t have, may look out for it. Always thought the idea of the Buffalo Jumps was amazing!

Another fun idea for the half hexagons!

I like your blocks so far. They look hard, but the right ruler makes all the difference. I can relate to looking at a book, and a quilt jumps out at me and says "Make Me!" It happens all the time, and I keep reminding myself of my goal of getting all of the UFOs out of here. But when they are finished, I shall be looking at my quilt books again. Thanks for linking with Design Wall Monday, Judy

I’ve been playing with my Accuquilt half rectangle die, and am intrigued. Your blocks are so interesting! And that reminds us to review our older books now and then, right?

Your split rectangles project looks great. It really does have pizzazz!

I look forward to taking a Road Scholar trip some day. I think they have a new name

Oh, I really like that unusual block with the HRTs. I may have to give that block a try. I made a whole HRT quilt and never trimmed any of them. I'm not a trimmer! I think I used the Tri-Rec ruler to cut mine.