DWM: two settings and a ribbon

My quilting friend Vic rescued me from last week's design dilemma when she commented, "How would you feel about using a narrow (2", maybe?) cheddar inner border, then the dark blue piano keys, then bind off with cheddar?"  I didn't have any cheddar batik, but I did have red-orange. It would have been easier if I'd switched out the eight red-orange HSTs before I assembled the blocks. :)  The flimsy is 70 x 78. 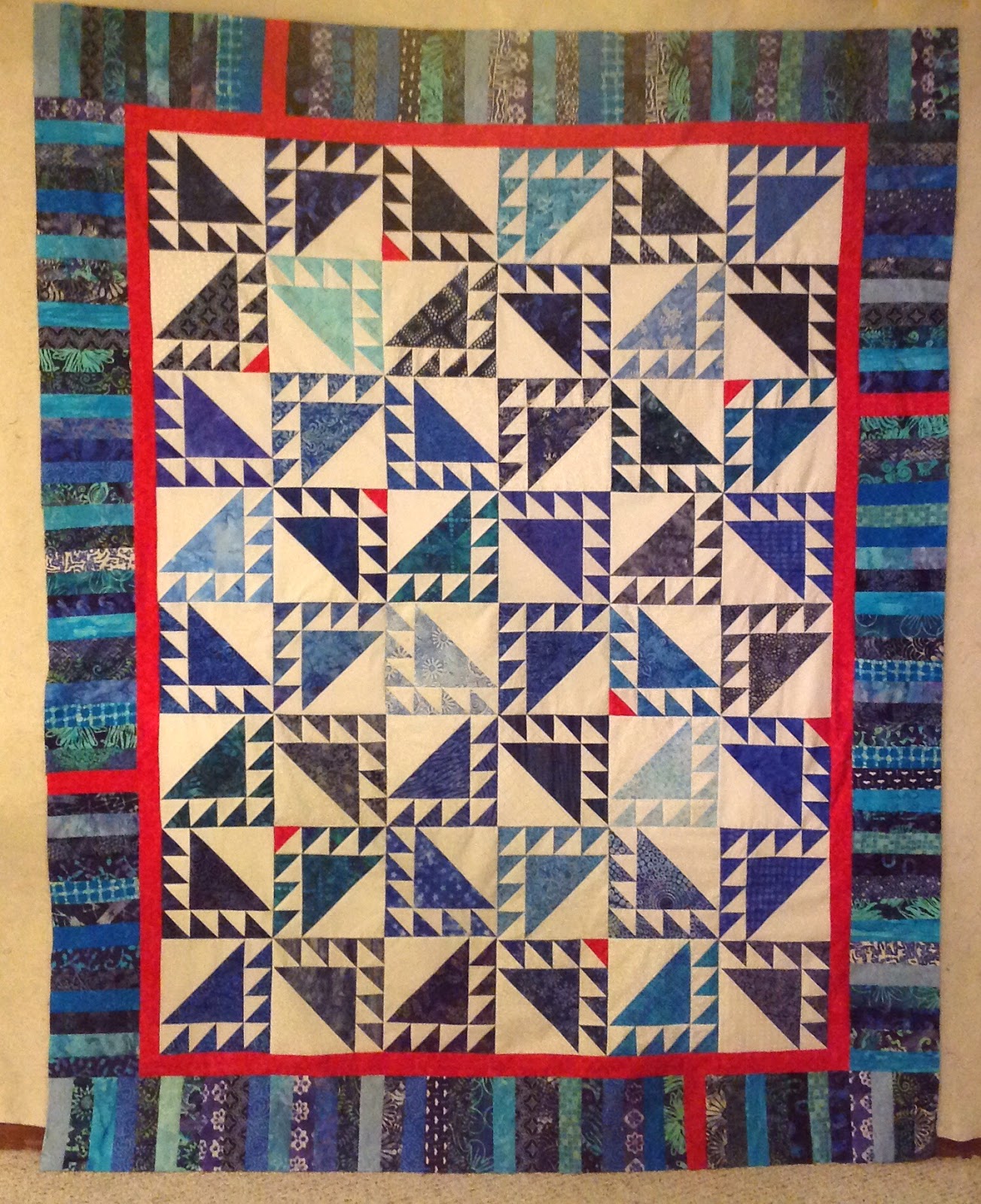 And I have some piano keys left over, but not too many.

The  Rainbow Scrap Challenge color this month is PINK.  The challenge is to make something, anything, using the monthly color. I'm trying to use units that I have on hand.  I had about 18 four-patch blocks made out of pink/white and red/white HSTs. I pulled pulled 3" pink squares out of the 3" square box, I cut up 3" squares from miscellaneous white-on-white scraps, and made a bunch more HSTs and then four-patches.  How to set them? 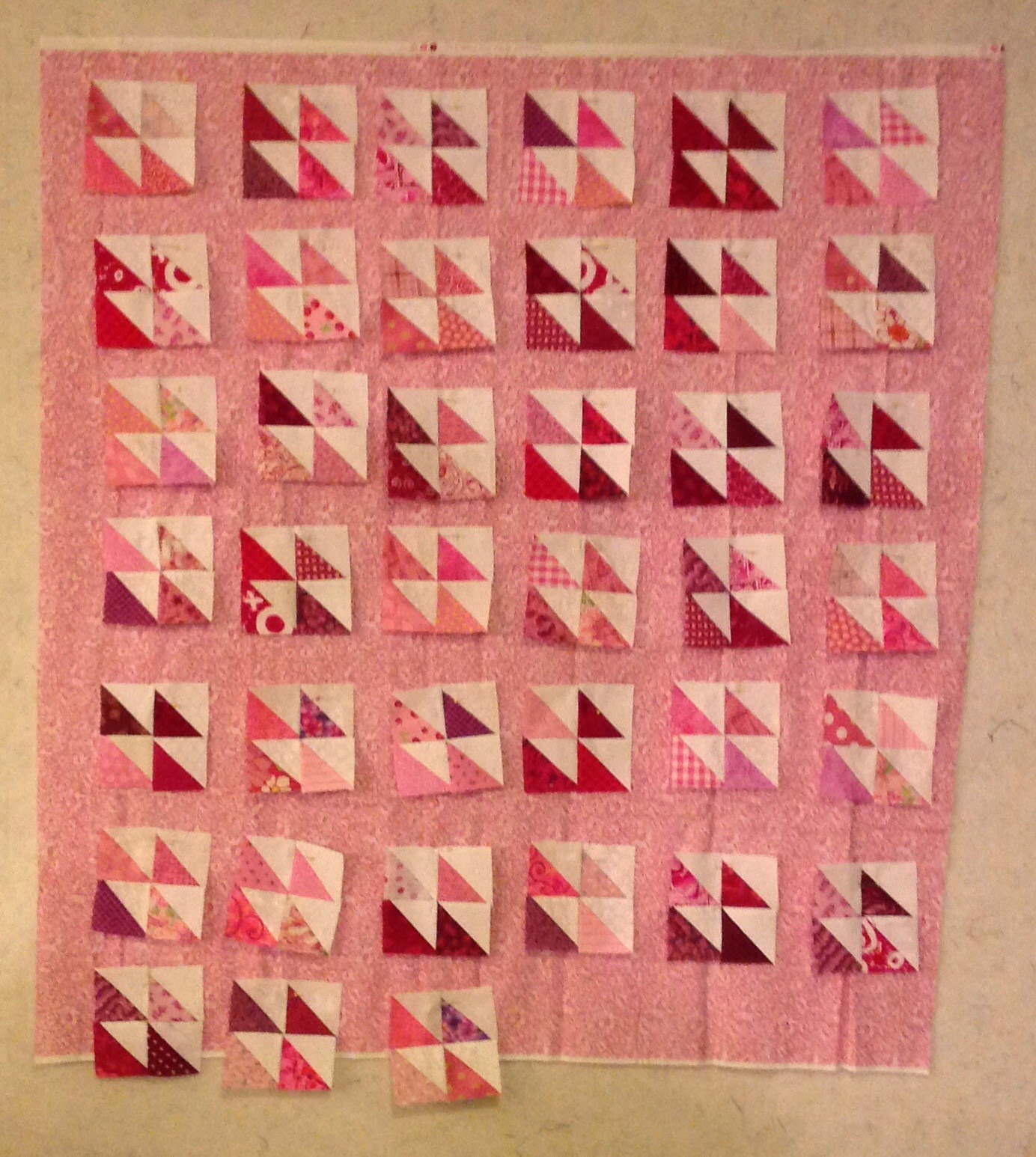 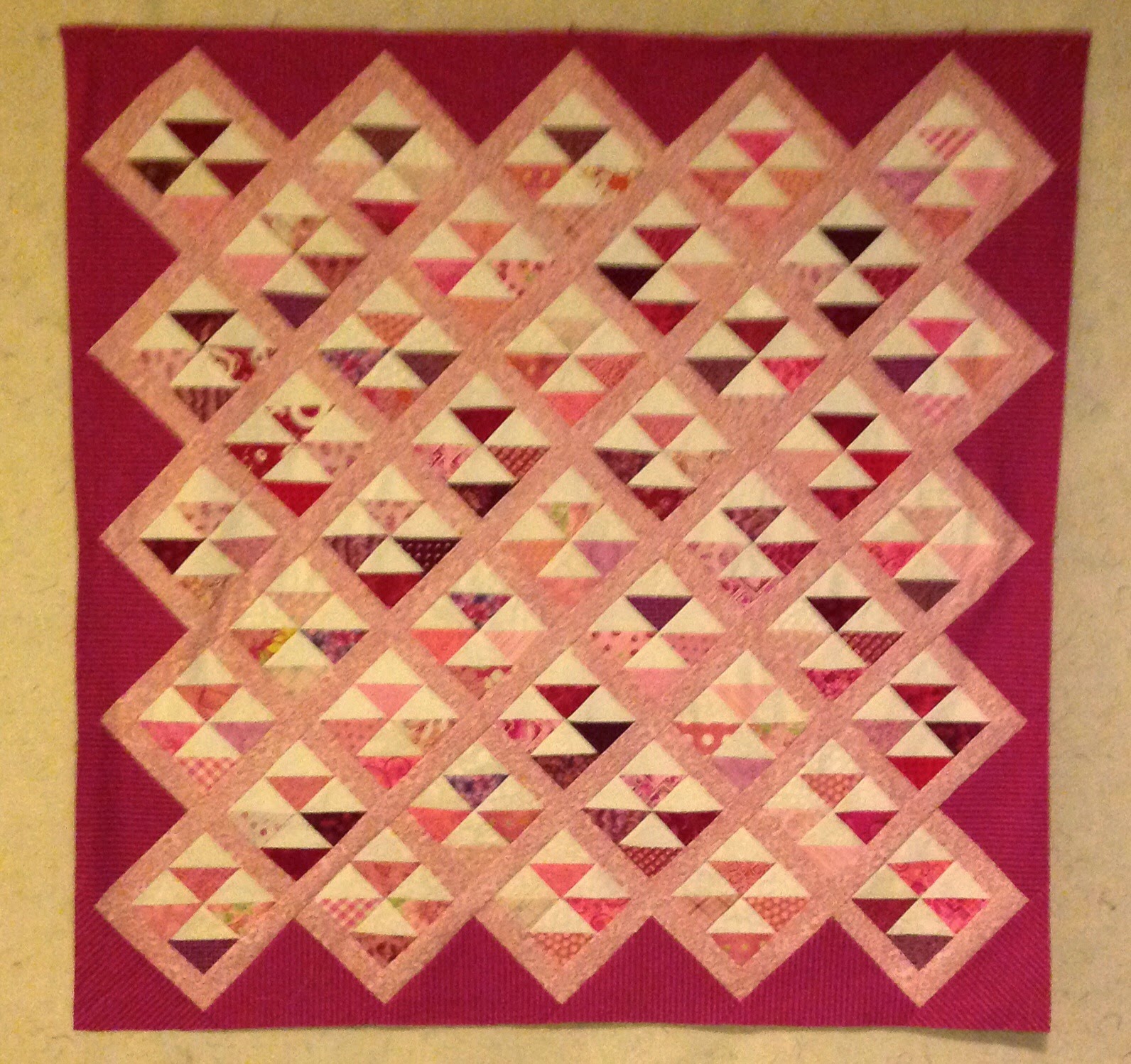 But what if I set them on point?  And here's how they turned out. 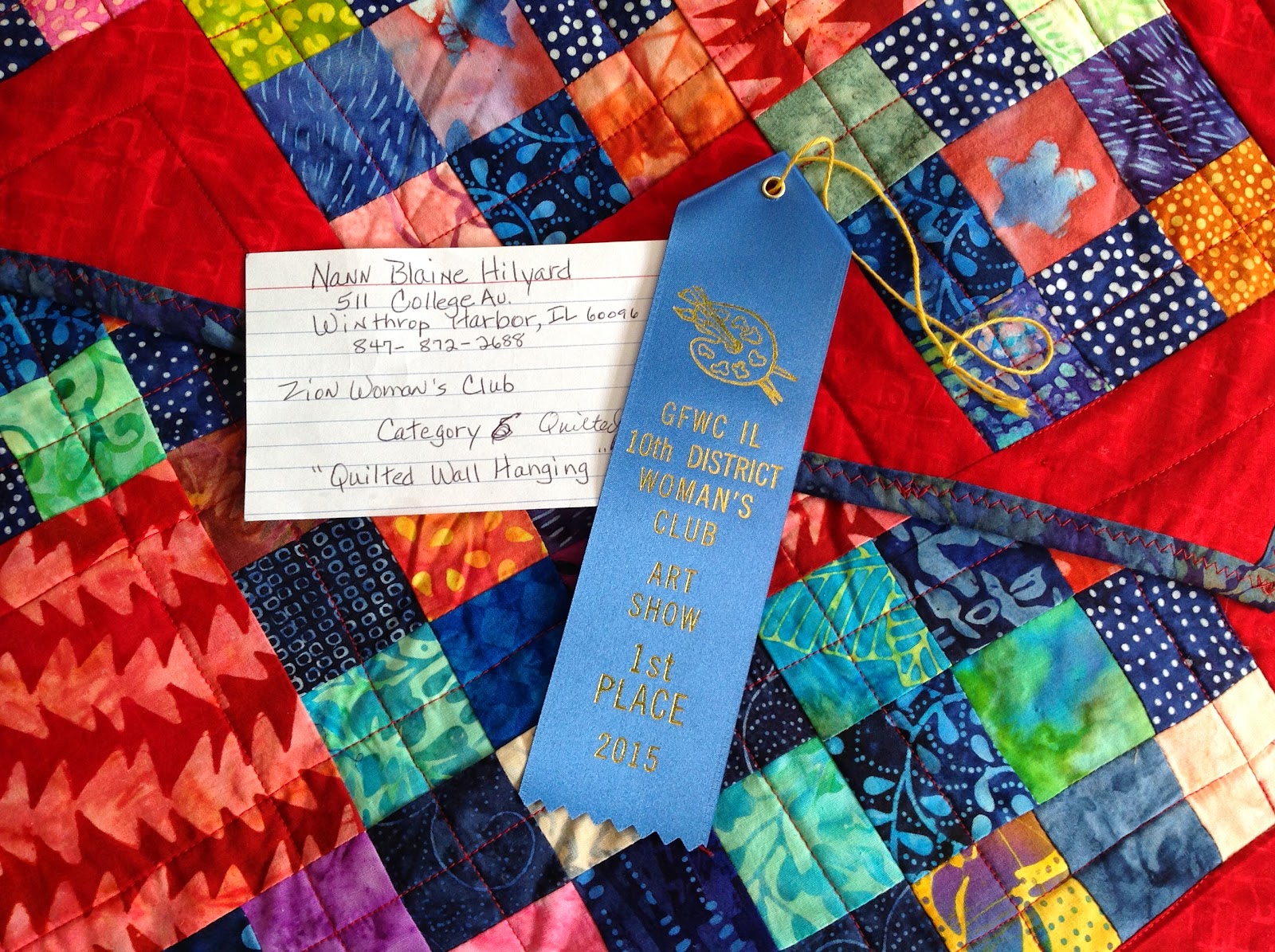 And the ribbon? I entered Lakeside Sunset into the General Federation of Women's Clubs-Illinois 10th District Art Show. I won first place! No monetary prize, but a ribbon is always nice to get. (You can read about the quilt here.) 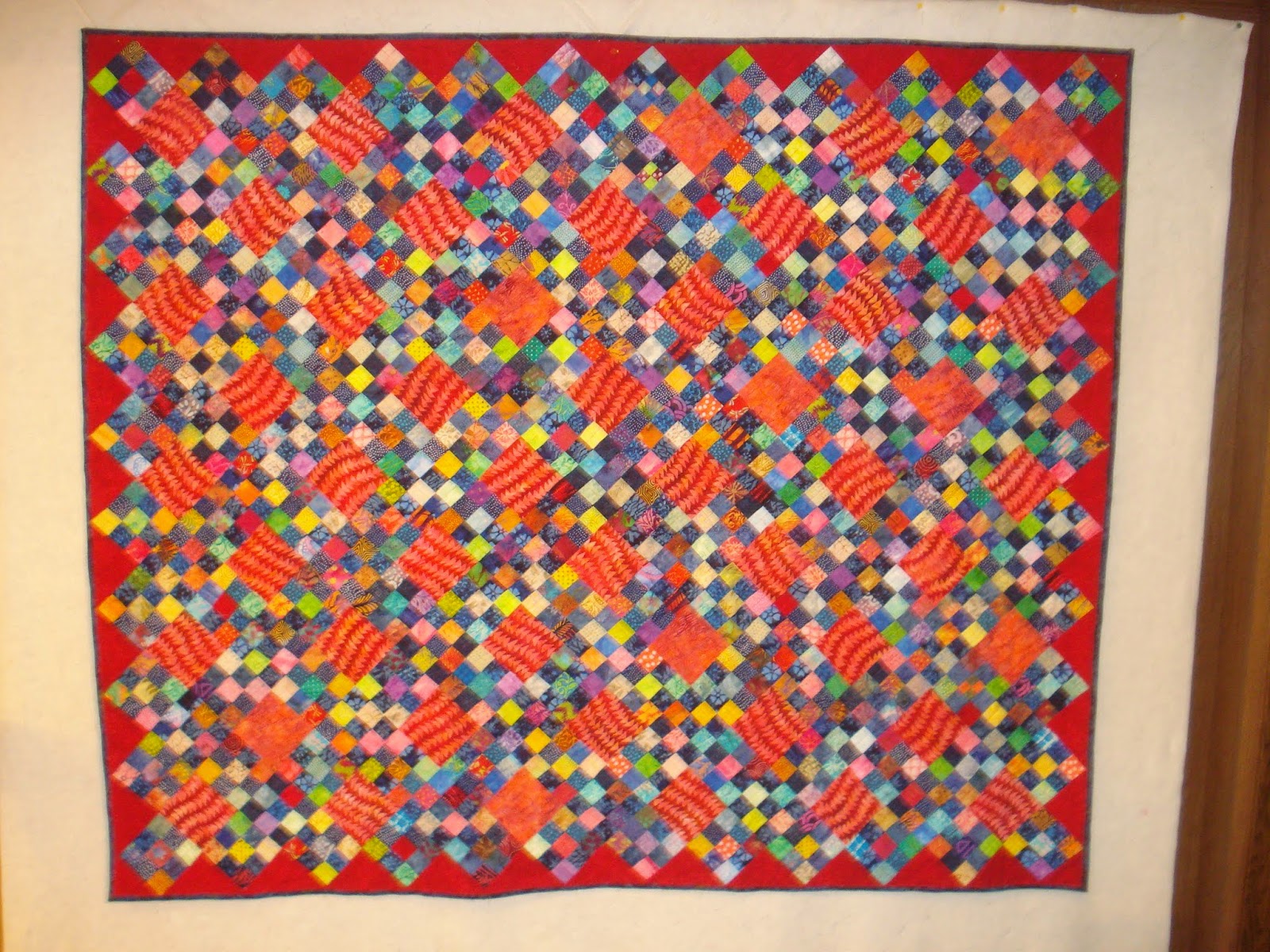 I'm trying to link up with the RSC here. I'm also joining other quiltmakers at Judy's Patchwork Times  and Beth's  Love Laugh Quilt .
Posted by Nann at 6:47 PM 13 comments:

Warm up with a good book

On Tuesday I got to do one of my favorite things -- give a book talk.  My presentation was to Chapter JS of P.E.O.  It is based in Northbrook, my home town. I grew up considering it "the other" chapter because my mother belonged to, well, the other Northbrook chapter.  There were about 30 women (when my chapter meetings have 10 we cheer), most of whom I didn't know -- but there were several I did know. One woman said, "Your mother and I were in the Art Associates for years. She gave me a cross-stitch picture of the Art Institute lions that I still have on my wall."

Here are the books I featured. Some are new, some are older, and all are good.
Fiction
Harman, Patricia.
The Midwife of Hope River.  A midwife in rural West Virginia during the Depression. She has a mysterious past.
The Reluctant Midwife.  (March, 2015)

Hashimi. Nadia.
The Pearl That Broke Its Shell.   I heard the author speak at ALA Midwinter.  Two strong women in the misogynistic culture of Afghanistan, contemporary and a century ago.

Schoemperlen, Diane.
Our Lady of the Lost and Found.

# # # # #
I remind the audience of Nancy Pearl’s  Rule of 50: "If you’re fifty or younger, read fifty pages of a book before deciding to commit to it or give it up. If you’re over fifty, subtract your age from 100, and use that as the number of pages to read before quitting. Using that formula, when you are 100 you can simply judge a book by its cover."
Posted by Nann at 10:14 AM 1 comment: 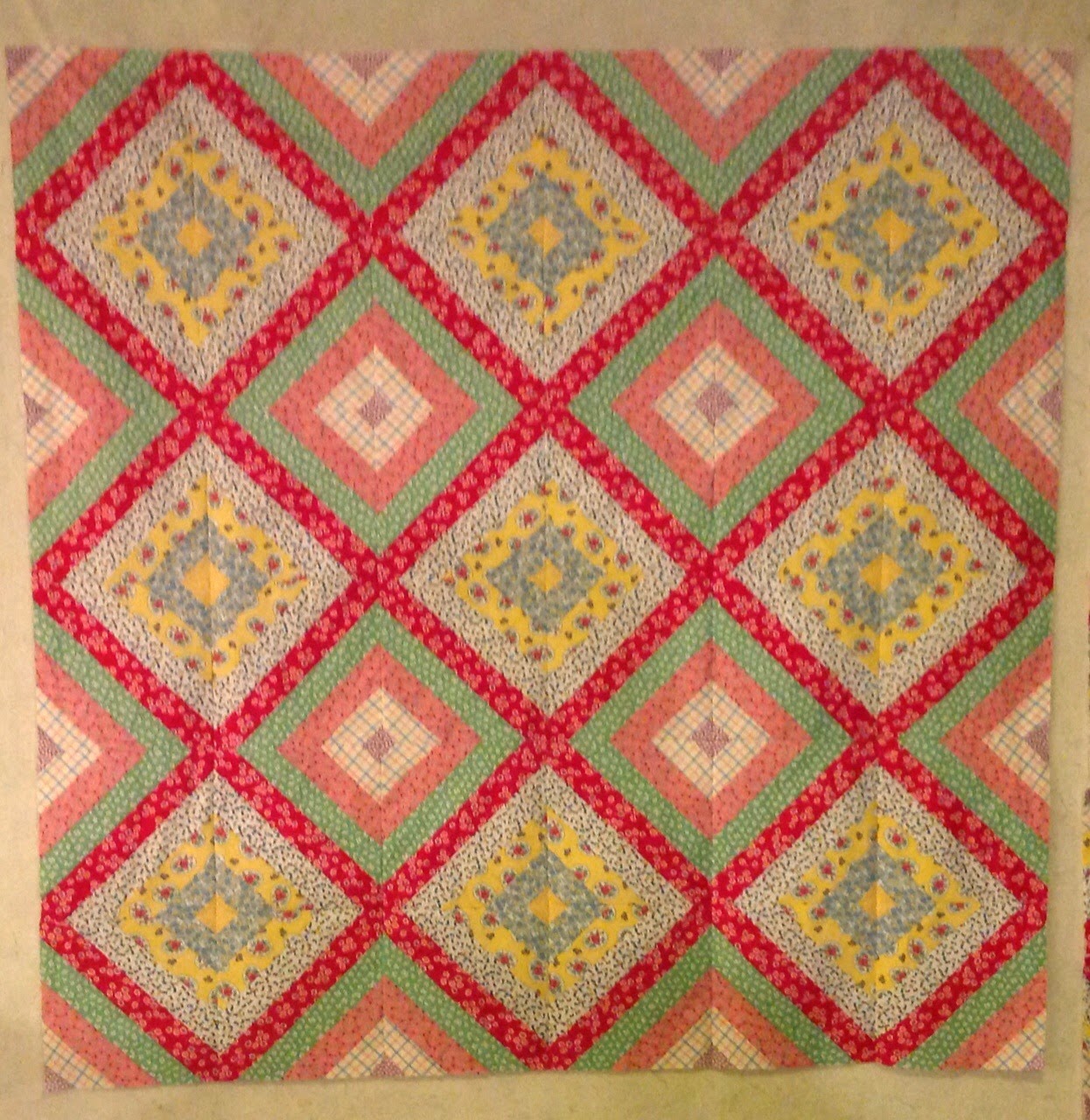 I decided to try a HeartStrings "Sharon" quilt in 30's prints. I had the strips laid out in order on the cutting table and made four batches of six blocks, then two batches of twelve blocks. When I began to sew the blocks together I found out that I had pieced twelve blocks in a different sequence than the other 36. If I can't resew the trips in the correct sequence I can cut more strips -- fortunately the error occurred on the outer corners and I have enough left of those particular prints.

Right: 12 blocks, incorrect sequence. (But on second look, there is one correct block among the 12.) 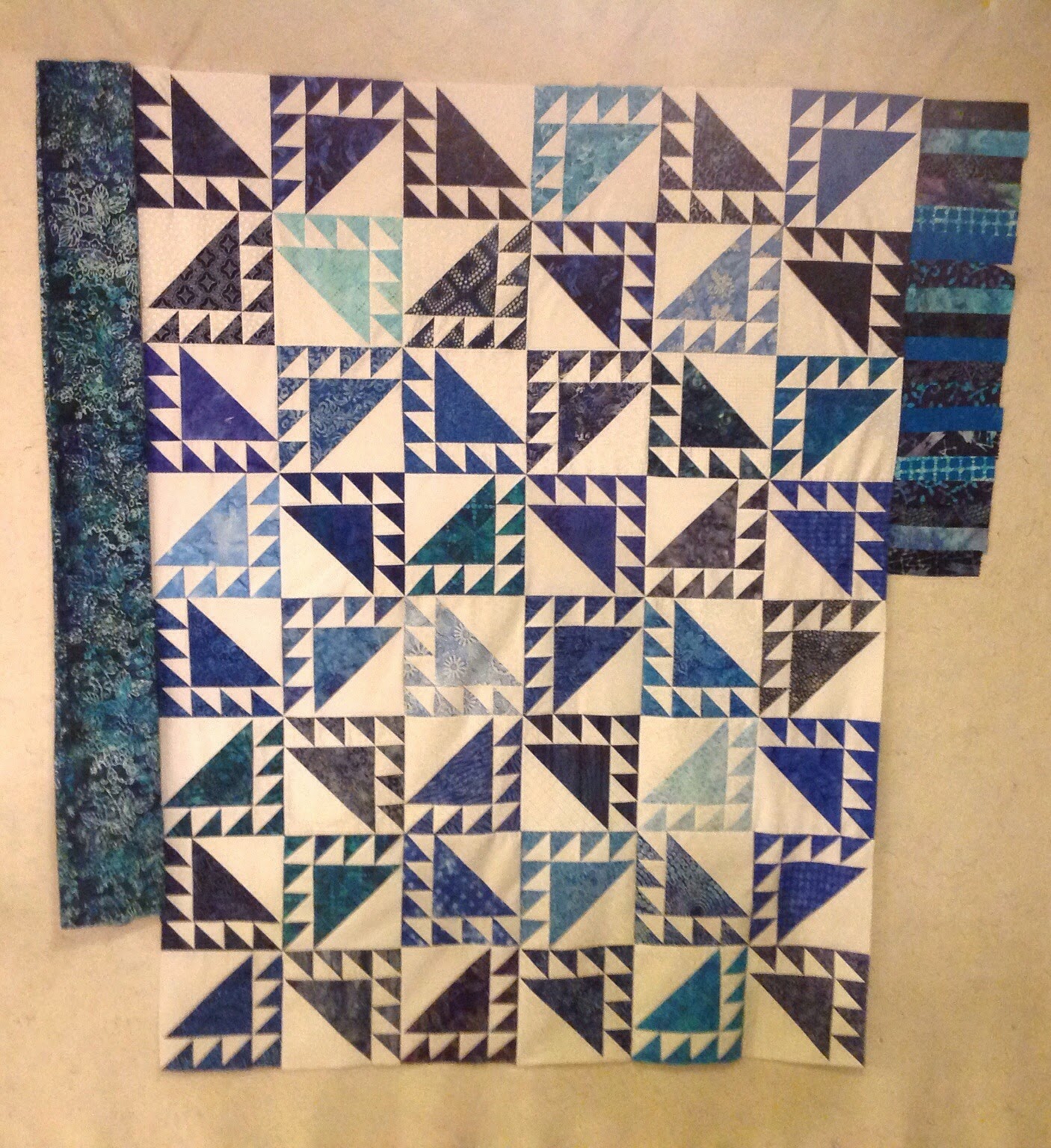 I assembled the Lady of the Lake blocks from Nancy's recent swap. I am undecided about the border. I have enough of the blue batik (on the left) for a slab border. But what about piano keys?  Are these too dark?  I don't think I want a narrow blue/wide white border.

See what other quiltmakers are working on at Judy's Patchwork Times  and  Beth's Love Laugh Quilt.

DWM: back in the studio

We had a mid-week chill so the quilt guild meeting was cancelled for the second month. That provided another evening to sew. 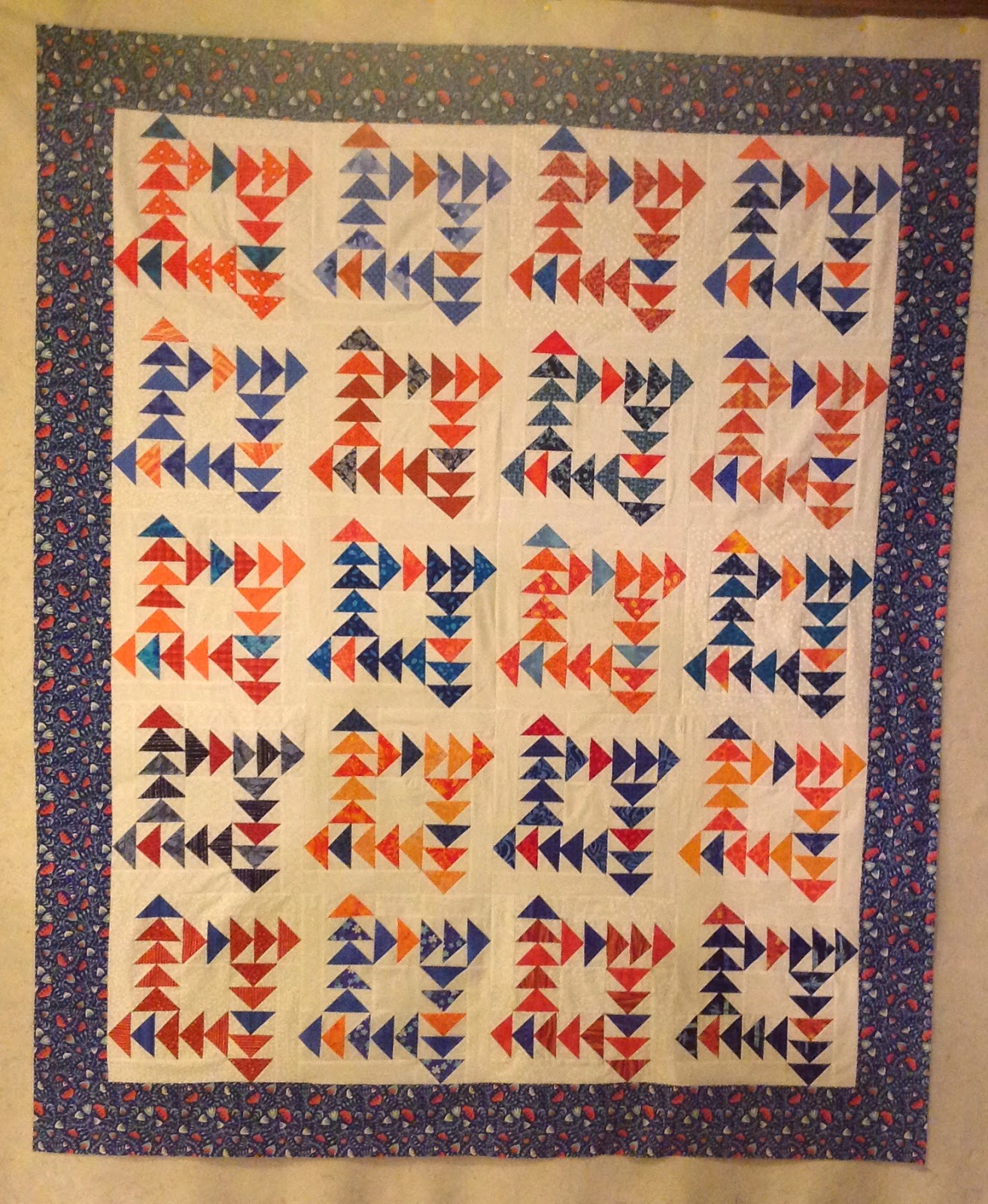 I finished all twenty blocks for "Not Afraid to Fly," the graduation commission I began a couple of weeks ago. Each of the 400 flying geese had to be trimmed.  I used 10 different white-on-white prints for the backgrounds (two blocks per WOW).  There are no repeats of oranges or blues. 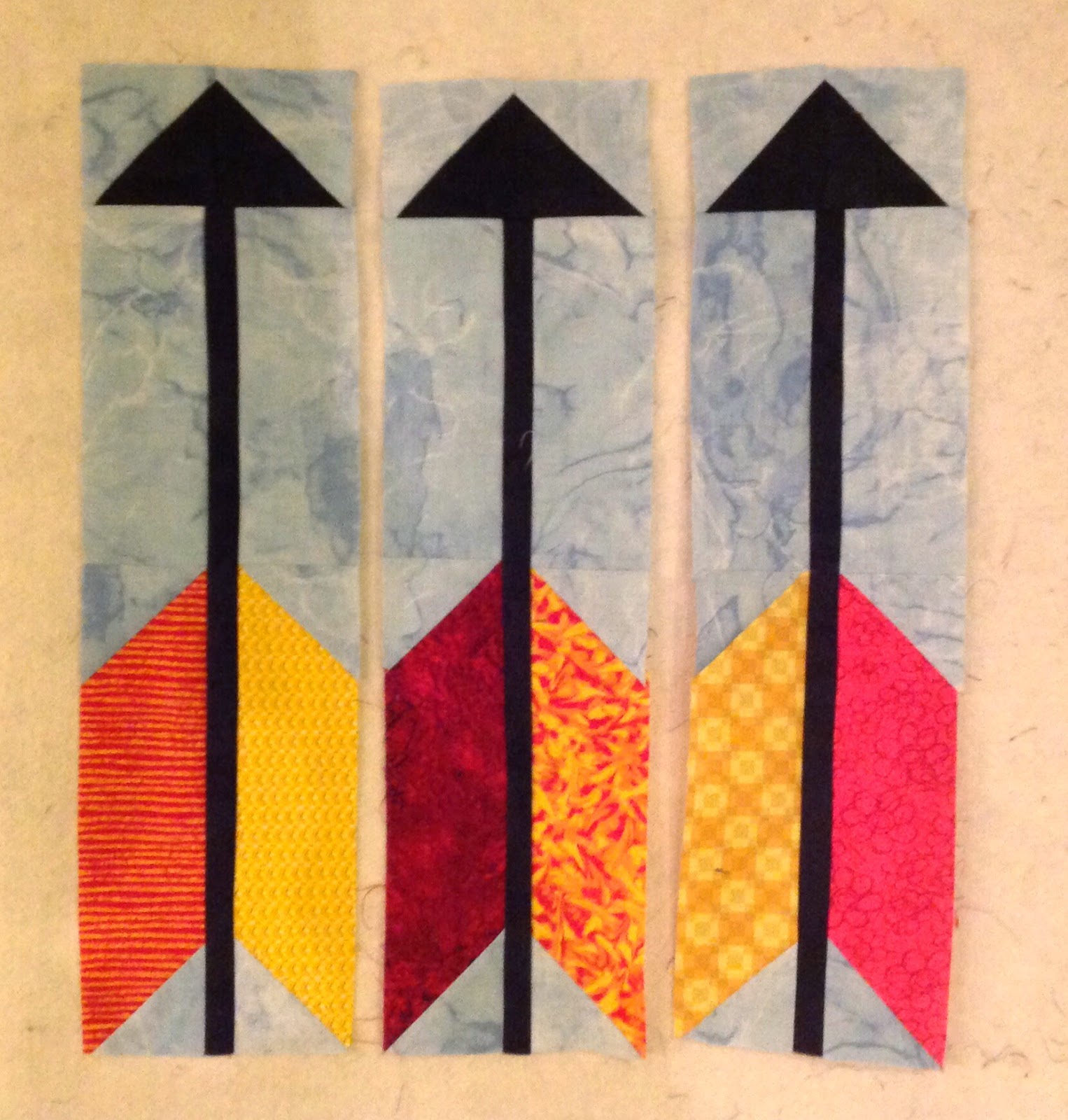 I made these four- and six-patch units as leaders-and-enders.  These will be the next 30's Bin Bust project.

This month's Block Lotto block is "Cupid's Arrow." Here are my entries (so far).

See what other quiltmakers are working on at Judy's Patchwork Times.
Posted by Nann at 3:49 PM 10 comments:

I am retired.   When I go to a conference I no longer have to save receipts for reimbursement, nor do I have to write a report for the library board.  But I've gone to ALA conferences for more than 30 years and reporting back is ingrained. (And if I take notes and transcribe them, I remember better.)

My schedule for this Midwinter was pretty much like pre-retirement:  going to meetings, not going to other meetings because of overlapping obligations, seeing long-time friends and meeting new people, and getting lots and lots of new books.  My roommate at the Hyatt Regency downtown was my good friend Pat who is director of another suburban library. We live just far enough apart that ALA is our time to catch up.

Non-librarians ask, "What do you do at conferences?" The Midwinter Meeting is primarily to conduct ALA business -- the Council and Executive Board (the governing bodies), the boards of all the divisions, and the hundreds of ALA and division committees.  Both Midwinter and Annual are also huge trade shows when publishers and vendors of library databases, equipment, and supplies show what's new.  Awards are announced at Midwinter.  Notable Adult Books and Youth Media  (Newbery, Caldecott, Coretta Scott King, and Michael Printz).

My schedule, in brief:

*  Thursday evening:  Executive Board Survivors dinner (those of us who served on the ALA Executive Board)
*  Friday:   Freedom to Read Foundation board (I am liaison to FTRF from the United for Libraries division

*  Friday evening:  Retired Members Round Table Dinner
*  Saturday morning: Council Orientation (I am on the CouOrient committee) followed by Washington Office Update (IL senior senator Dick Durbin spoke, followed by a good presentation by a U of Chicago poli sci professor about party polarization in Congress over the years)
*  Saturday afternoon: Executive Board and Membership Update (ALA business update), followed by the 2015 presidential candidates' forum (4 candidates this year) 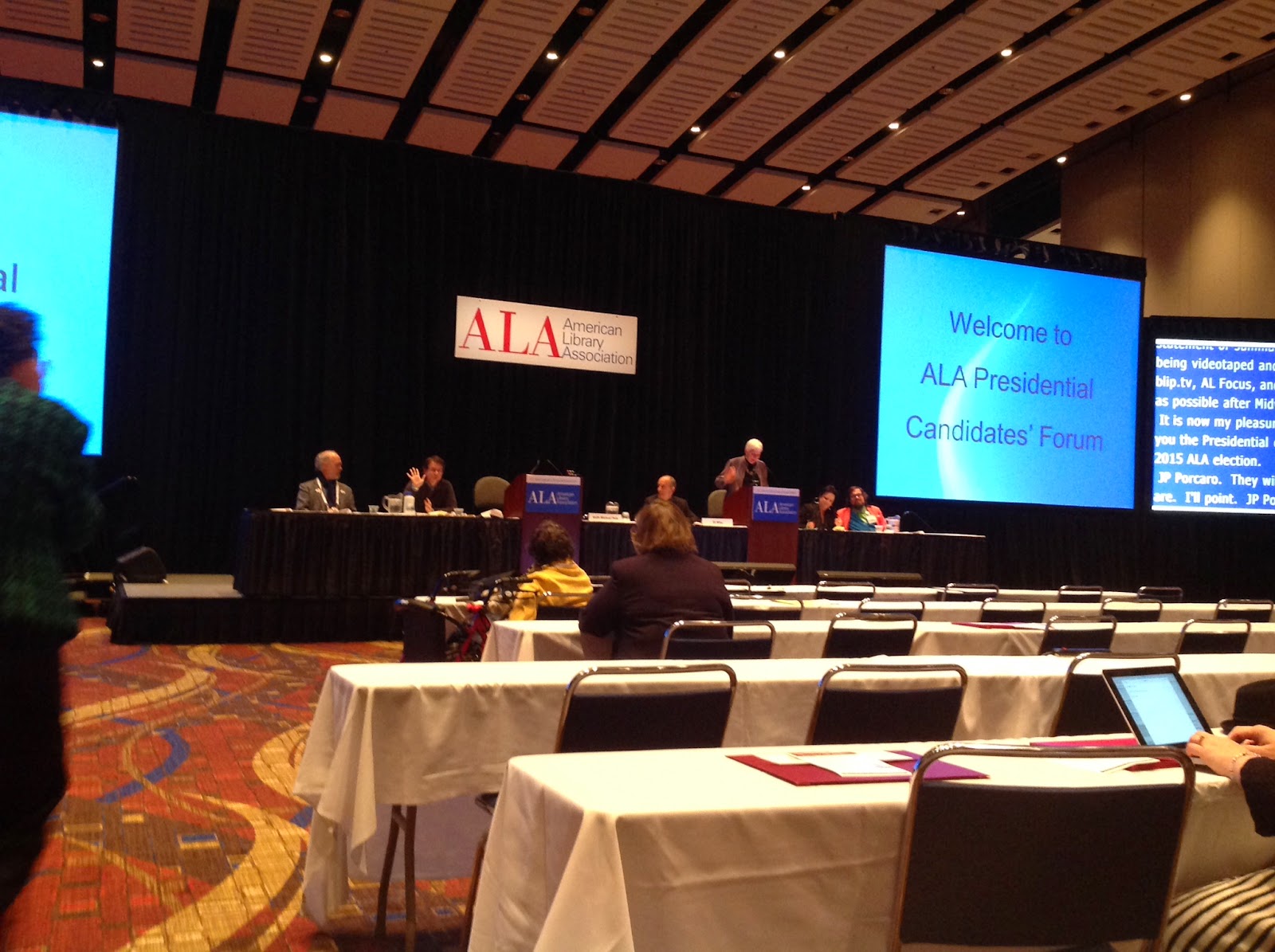 Sunday morning we woke up to snow.  It snowed all day, turning into the fifth-largest one-day snowfall in Chicago history.
* Sunday breakfast at our hotel):  Alexander Street (publisher) hosted Loung Ung, an American from Cambodia who is a human rights activist.  Here is her website
The shuttle buses navigated slippery Lake Shore Drive to get conference-goers to McCormick Place.
* I facilitated a Kitchen Table Conversation, a group activity to solicit members' ideas to improve ALA.
* Sunday afternoon:  the University Press Books for Public and School Libraries committee met. (See my books for this year's bibliography in this post).
** My second committee meeting, scheduled from 3-5 p.m., was cancelled due to the blizzard. We will have to have a conference call to catch up.
* Sunday evening, back at the Hyatt:  my friend Carol and I had dinner in the hotel restaurant. It was crowded, rather like being in a college dining hall: we all sort of knew one another.  I did not intend to watch the Super Bowl but it was playing on about two dozen TV screens all around us, so I could not miss it. (Go Patriots!!!!)
The storm had blown over Monday morning.  Pat and I slept in and did not make it to the MLK Sunrise Observance at 6:30.  We took a later shuttle to McCormick. She had a Council meeting and I did another turn through the exhibits.  The vendors don't want to take stuff home so there are bargains to be had! I filled two tote bags to overflowing. In all I spent $136 to ship mostly free books. (And I still have to pick up a totebag that a ZBPL colleague took back with her.)

* Monday afternoon:  United for Libraries author tea -- six authors talked about their latest books. Copies were available for signing. (The authors: Thomas Perry, Marja Mills, Elizabeth Berg, Meg Cabot, Lashonda Barnett.)
* Monday evening: a group of us always have dinner on the Monday evening of the conference. This time there were six of us. We went to Russian Tea Time on East Adams.

Tuesday morning I took the train home.  My ALA boxes arrived the same day! I have lots of reading to do. 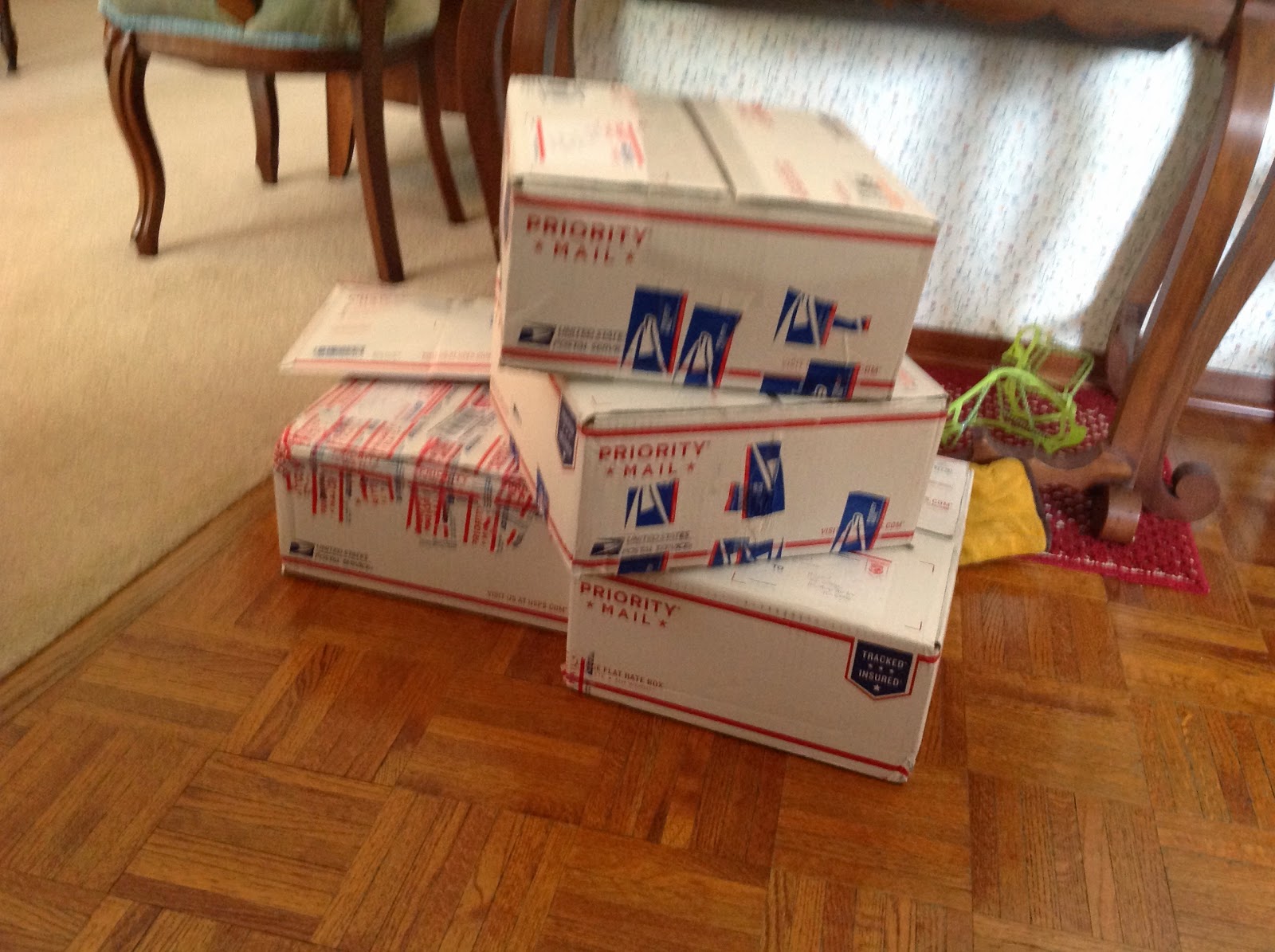 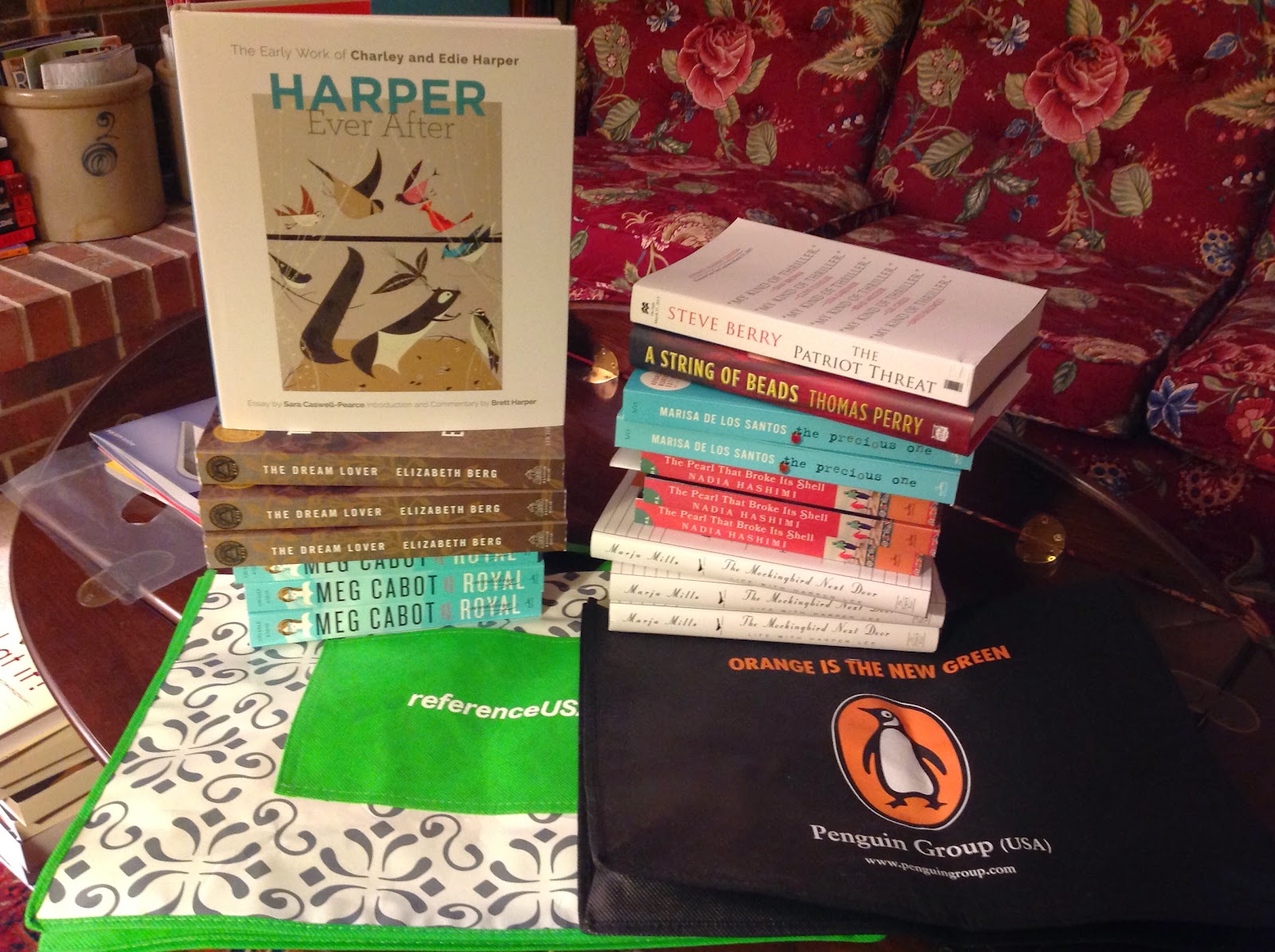 Labels: ALA, ALA Midwinter Meeting

Note that not only did I not acquire fabric in January, I did not acquire any in November or December.
Posted by Nann at 2:06 PM 3 comments: