Surf's up! and another finish 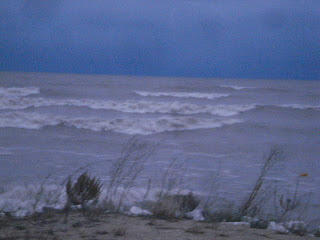 Lake Michigan was affected by Hurricane Sandy, the "frankenstorm" that socked the east coast this week. I took this photo just before 6 p.m. It looks like the ocean, not like the lake!
Here's another finish to add to the list -- #38!   I made Nine Patch Strippy in 2010 using blocks left over from a quilt about five years before that.  I quilted loopy flowers in the nine-patches, meandering in the zig zags, and more "almost feathers" in the border. I was apprehensive about using light blue thread on the dark blue but I didn't do too badly.
This is 56 x 64 and used 2-3/4 yards to back and bind. 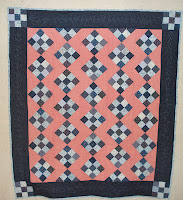 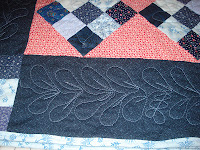 DWM: two finishes, and other accomplishments

I hate to paint.  It goes back to the time I had my first apartment and I decided to repaint the shower stall.  I thought I had to strip off the old paint before I repainted it -- innocent stupidity -- I made a mess of it. I didn't dare tell my landlady but eventually went next door to the Smiths.  They had updated their old house, and Mr. Smith worked at the lumber yard so he knew about fixing things.  Mercifully he didn't judge my ineptitude. He recommended the kind of paint to buy and I fiinished the job.  35 years later I still hate to paint.  I don't like moving stuff out, I don't like taping, I don't like cutting in, I don't like the inevitable (for me) drips and splats.  But paint I did, and the master bath is freshly "coral" and the newly-installed ceramic-tile shower stall looks great.  (Don't look too closely at the corners. Or the ceiling.)

That was one of the accomplishments this four-day weekend.  Another was raking the back yard in the brisk temps and beautiful sunshine yesterday.

The third was finally compiling essays for the "Perspectives" column for the November/December issue of Public Libraries.  Just two weeks late. (Sigh.) The topic is "life after the front lines," about what librarians do when they're no longer directing or managing library departments.  Of the three contributors, one is consulting, another is an artist, and the third is on assignment in Brazil for the U.S. State Department. 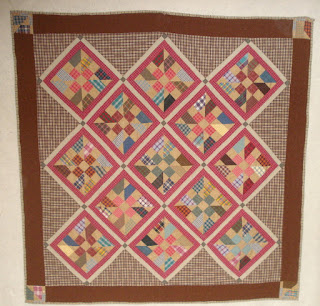 The fourth accomplishment was quilting and binding two flimsies!

"Plaid Spinner" dates back to 2007. I made the spinner blocks and swapped them in setting exchange -- that is, I sent these off and in turn I got someone else's blocks to set.  I can't remember who created this clever framed setting, but it certainly made the spinners more interesting.  The finished quilt is approx. 64 x 64 and will be a raffle prize at the community spelling bee November 8. 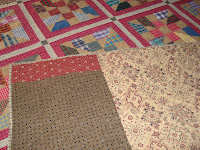 I pieced the back and used up fabric that's been in my stash for about as long as Plaid Spinner has been a flimsy.


Rick Rack Batik was created just last month. I quilted straight lines in the 9 patches, continuous curves in the squares, and "almost feathers" in the border. 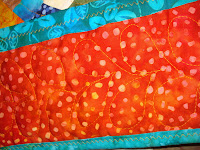 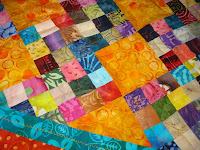 What's next?  I have another old flimsy basted and ready to quilt!
See what other quiltmakers have accomplished at Judy's Patchwork Times. 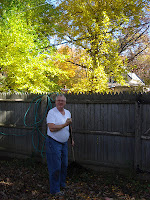 I took a red-eye flight from SFO to ORD (Sunday, 10/14, to Monday, 10/15). I'd never done that before and now I know what it's like:  I dozed but did not sleep.  I got home at  7 a.m. and took a 3-hour nap.  I was glad I kept up with work-related email while I was in California or I'd never have gotten through the week.  I stayed home Tuesday evening (and watched the presidential debate), but had meetings Wednesday and Thursday.  A day off Friday provided some catch-up but I had events at the library Saturday morning (Zion-Benton Leadership Academy) and afternoon (antiques appraisal). 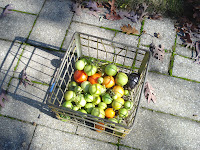 Sunday was a perfect October day.  We raked leaves and pulled the remaining tomatoes out of the garden. (Two little eggplants, too.) 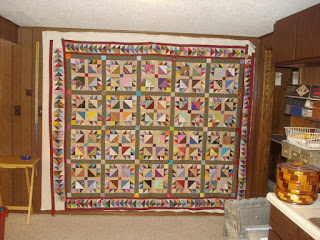 Back to quilting!  I will post photos from the Pacific International Quilt Festival and the Magpies' meetup once I sort them.  Meanwhile, here's how the scrappy Bear Paw quilt looked at 10 p.m. yesterday.  I combed through  my stash and found a beige print with red flowers that would do for the border. I wasn't wild about it but I'd settle for it.  After I cut crosswise strips I realized that the border had a "drop match" (like wallpaper) and if I didn't line up the strips precisely the effect would be all wrong.  I didn't have enough fabric to do that.  I changed the plan to flying geese made out of the  2.5" HSTs that are my default size for leaders-and-enders, with red strips for stability. If I'd pushed ahead to attach the last of the borders I would have gotten a second wind. I opted to go upstairs and get some sleep.
See what other quiltmakers are working on at
Judy's Patchwork Times.
Posted by Nann at 8:42 AM 10 comments:

"An American Icon: Majestic Yosemite National Park" was my 27th trip with Road Scholar, October 7-12.  Both the park and the week's itinerary lived up to my expectations.   ﻿﻿

My husband wasn't able to  join me this time, but my fellow Magpie MJ was a great travel companion and roommate.  We took BART into San Francisco Sunday morning. It was a beautiful day and we walked and walked from the Embarcadero BART station along the bay (lunch at Pier 39) to Fisherman's Wharf (dessert: ice cream from Ghirardelli).  We ran out of time to take the cable car back to Powell St. and BART, but we made it back to the hotel in time to meet up with the Road Scholar group.

With 39 participants this was a larger RS than our other recent trips. The leaders, Pete and Arline Hora, are veteran RS leaders who have conducted this RS numerous times.  The itinerary allowed us to see the major aspects with flexibility for discovery on our own.
* Coach bus from Burlingame/SFO to Yosemite, and also for transportation in the park 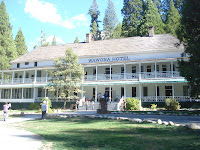 
* Lunch at the magnificent Ahwahnee Hotel ﻿﻿
* An evening with John Muir (reenacted by Frank Helling)
*  Glacier Point
The scenery was magnificent and the company was very pleasant.   We concluded our Road Scholar trip on Friday afternoon....and MJ were on to our next adventure with the Magpies!
﻿

I saw this same plaque at Isle Royale. It is a memorial to Stephen Tyng Mather, under whose administration the National Parks were established.  "There will never come to an end the good that he has done." What a wonderful tribute! ﻿﻿

With Liberty and bargains for all

﻿
I went to a fabric sale today at a church a couple of towns over.  The church women had been given the last of the inventory of Cotton Pickers, a long-established quilt shop that closed about 10 years ago.  "All fabric $2 yard, proceeds to mission projects."  I had a meeting early in the day so I didn't get there until 9:45.  That was just as well because I could not have coped with a greater selection.
Here's my haul:  Hoffmans, Jennifer Sampou, Jinny Beyer, and more.
﻿

I knew from the hand of the fabric that these five pieces were lawn, and I suspected they were Liberty, but the tags that fell out proved it.  I scooped them up.  (Two four-yard pieces and three yard-and-a half pieces.) 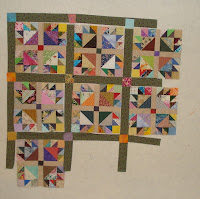 And now, on the eve of vacation, here's my design wall:  very scrappy bear paws in progress.....Next post will be from California!

The "tradition with a twist" guild challenge quilts were revealed this evening.  There were 6 "art" and 9 "traditional" entries.


The art quilters are so inventive! ﻿﻿﻿