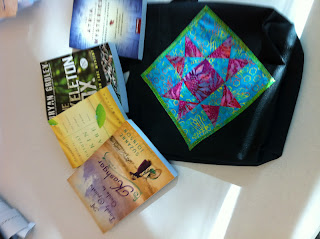 A friend of mine won one of the transformed totes that ZBPL contributed to a charity auction.  She told me that this past weekend she was walking in one of the forest preserves and had that tote with her.  A woman who was a complete stranger struck up a conversation and they chatted for more than half an hour. The stranger said she knew my friend was okay to talk to because she of the quilty tote bag!

The version pictured here will go to the Zion Township Volunteer Appreciation Dinner, along with this quilt (scroll down to the end of the linked post to see the quilt).
Posted by Nann at 7:40 PM No comments:

My Design Wall Monday posts are usually composed just before bedtime on Sunday evening when I've come upstairs after watching Mad Men (or, earlier in the year, Downton Abbey).  Today I'm writing Sunday morning before church because the rest of my day will be taken up with 'homework.' 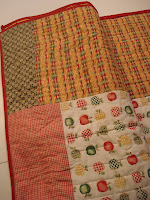 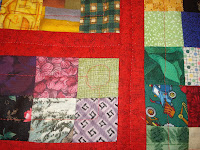 I've quilted 23 flimsies (see the "Flimsy Completion" page) since December.  I can tell that my free motion quilting is more confident and a lot faster as a result of all this practice.

Here's what became of the triangles left over from Rachel's Kaleidoscope .  I decided to make a Friendship Star variation.  I ought to have pulled the sashing and border fabrics at the same time, but I didn't.  The pink-with-purple flower sashing, (which I bought years ago when Hobby Lobby had bins of clearance fabric) practically leapt from the shelf to the cutting table. I cut the sashes and sewed them on. Then I looked for border fabric.   Nothing seemed right.  It was late and I was tired, so I came upstairs and slept on it. This  morning the turquoise-purple (looks like homespun but it's a print) and the grape-violet came to the top of the stack and were perfect.  This flimsy is 52 x 62 and used 3-1/4 yards.

See what other quiltmakers have been working on at Judy's Patchwork Times .
Posted by Nann at 10:04 AM 9 comments:

DWM: triangles, a finish, and bargains 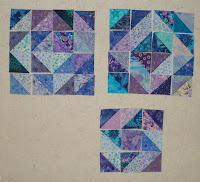 A stack of triangles resulted from trimming the paper-pieced Kaleidoscope blocks.  This weekend I sewed them into HSTs.  I've trimmed them to 3" (unfinished). I turned to Spectacular Scraps, one of my go-to books, for setting possibilities.  SS uses Douat's permutations   -- 64 different ways to arrange four triangles (or, for quiltmakers, four HSTs).
(The lower block is just a Friendship Star, not a Douat pattern.) 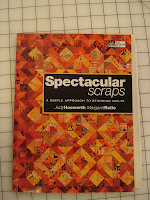 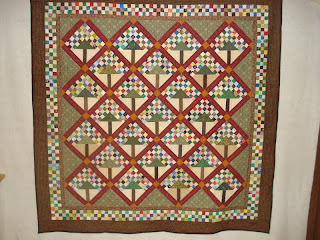 I pieced Crabapples (a Bonnie Hunter pattern) last year. It was perfect for a wedding gift for my sister and her fiance. At 70 x 70 it can be a two-person sofa quilt.

The wedding is April 29 so I am right on time.

At a garage sale on Friday I scored a half dozen boxes of books for the library, all free. After that generosity I had to buy something!  Seven one-yard pieces of fabric (six quilting cottons and one corduroy) for $7.00.
See what other quiltmakers are working on at Patchwork Times!
Posted by Nann at 6:16 AM 10 comments: 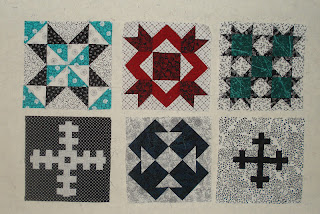 Here is the next installment of the Bag Lady Swap .   Janet specified 12" black-and-white blocks. She said that teal, red, and forest green could be added.  She made the Four T block in the bottom row.  Carla made the two cross blocks that flank the T's.  I added color for three blocks. From left to right they are Pinwheel Star, Weathervane, and Corner Star.  (I discovered Corner Star for the 2012 Birthday Block exchange .)

Tomorrow I will mail the box to Katie.  (The sequence is Janet-Carla-Nann-Katie-Debs-Lynne, so next month Carla will send me the blocks that Lynne began.)
Posted by Nann at 9:14 PM 1 comment:

The quilt on the bed

"Double Delight" is the quilt on my bed.  I Of all of Bonnie's mystery quilts, this is my favorite. (Thus far.)  I made  the top  at the end of 2008 but didn't get it quilted until this year. 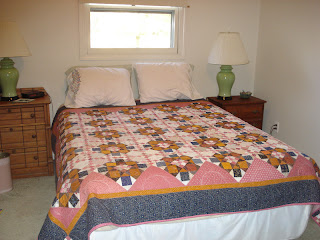 See what quilts are on other quiltmakers' beds on the Quiltville blog!
Posted by Nann at 6:36 PM 4 comments: 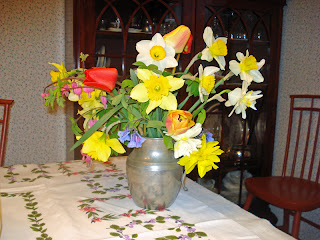 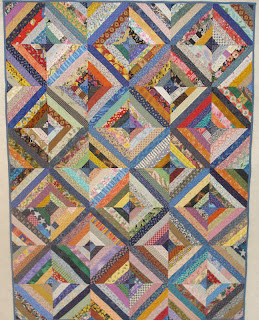 Happy Easter!  The men of the church provided Easter breakfast.  DH co-celebrated at morning worship.  At home we had lamb, asparagus, wild rice pilaf, and cheesecake.  (The pilaf was a departure from the new potatoes we usually have.) This bouquet from our garden graced our table today. (Note the dicentra -- bleeding heart -- about two weeks earlier than usual due to the warm weather.)


Finish #1:  Four years ago I made 366 Heartstrings blocks
-- that's one a day in a Leap Year.
It's one thing to make all those blocks. It's another to make them into quilts -- seven 48-block and one 30-block.  I thought I'd finished them all but at the bottom of the box of flimsies were two more 48-blockers. Here is one of the two, quilted and bound. 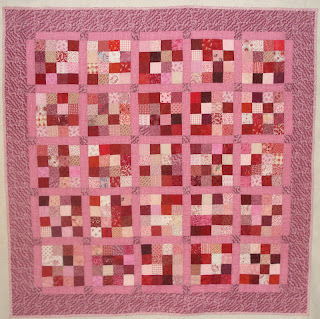 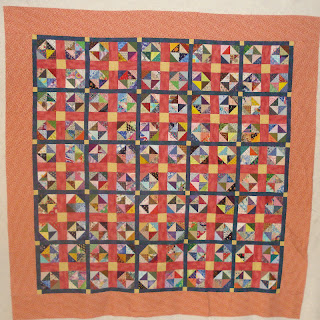 Bonnie Hunter calls this block "Grandpa's Star" in her "Addicted to Scraps" feature in the March/April issue of Quiltmaker.    I wrote last week that I'd make blocks until I ran out of red sashing fabric.  I had enough for 25 blocks.  Bonnie's block has 1.5" half-square triangles. Mine are 2.5", with 1.5" sashes and cornerstones.  I contemplated making a pieced border but I found a red print (it has little yellow ovals) in my stash and there was just enough to cut 6" borders.  Total stash busted: 4-7/8 yds. 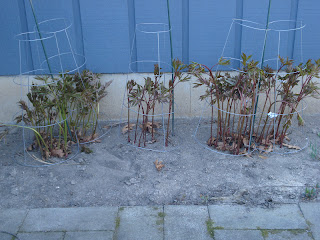 In June, most years, when I mow around and over the sprawling peonies I tell myself, "Next year, stake them!" The record-breaking warmth this spring means that the garden has come along weeks ahead of usual.  I was surprised to see how big the peonies are already. But today I staked 'em! 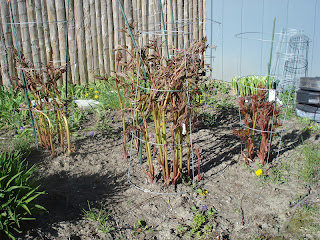 DWM: finishes and starts (no fooling!) 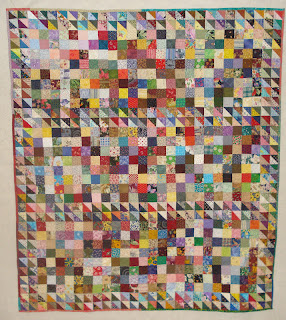 Simply Scrappy is finished! I used variegated thread and just meandered. The binding is made from leftover binding strips (2.25").  It didn't even make it to UFO status! 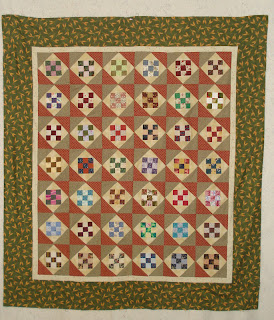 However, this was a UFO dating back to 2010. The photo shows it unquilted, but I have now finished, bound, and labeled it.  (I quilted loopy flowers in the 9-patches, continuous curves in the hourglasses, and parallel horizontal lines in the border.)  This will be donated to the Zion Township Senior Fair later this month. 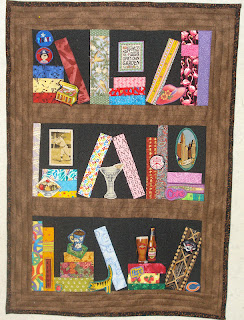 And I've made another bookshelf quilt for a coworker who is retiring in April. 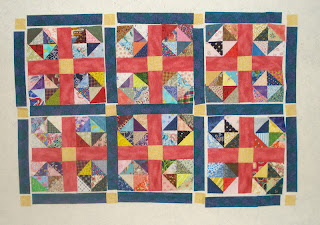 I'm still making HSTs as leaders-and-enders. The block is called "Grandpa's Star." It's Bonnie Hunter's "Addicted to Scraps" block in the March/April issue of Quiltmaker. She used 1.5" HSTs for a 7" block. Mine are 2.5" for a 10" block.  I'll make blocks until I run out of the red sashing fabric.

Check out what other quiltmakers are working on at Judy's  Patchwork Times
Posted by Nann at 10:21 PM 12 comments: