I was thankful for time off this holiday weekend.  We took a couple of long walks the days that the weather was clement, had a delicious turkey dinner (with lots of 'planned-over' turkey), and avoided shopping as much as possible.  I got a lot of sewing done. 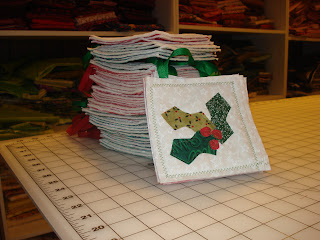 61 ornaments (for library staff and trustees).  The holly leaves and berries are fused and free-motion-quilted. 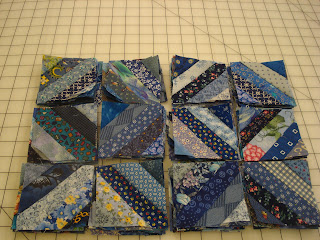 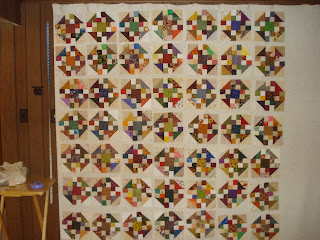 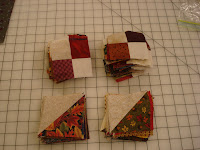 The Block Swappers had a quarterly swap for sets of units made up of 4-patches and HSTs in autumn colors.  The unfinished size was 4.5". I cut ALL the units down to 3.5", added a center square, and made 74 9.5" Prairie Queen blocks. The design wall shows 49 of them. I've auditioned many different fabrics to use as sashing, but no decision yet. (There is so much going on in each block that they need to be separated by sashing.)

Take a look at other design walls and Orca Bay blocks today!
Posted by Nann at 9:52 PM 14 comments: 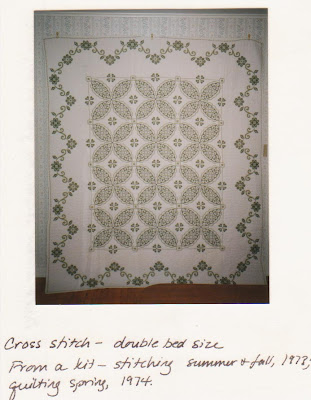 Bonnie invited photos of first quilt projects.  Here are scans of mine, with the commentary from my quilt journal. (Said journal has been sadly neglected abandoned since I began recording my work with digital camera and, eventually, my blog.

I cross-stitched the first quilt the year I was in graduate school.  It is still the largest item I have hand-quilted. (I used the quilt for many years and of course I still use the degree.) 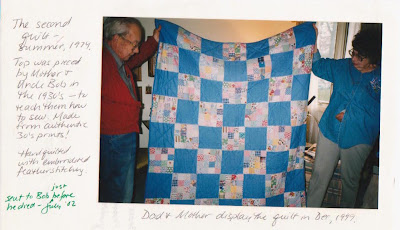 I don't know if any of my cousins still has the second quilt. Their mother passed away a couple of years ago so the household contents have been dispersed.  This is a design mish-mash:  30's prints (genuine!) and blue solid, with a solid blue bedsheet backing. I used pastel DMC floss to feather-stitch around all the blocks. This was hand-quilted, too.  I used a pencil to mark a cross-hatched grid and hearts in the solid blocks.
Posted by Nann at 9:23 AM 1 comment: 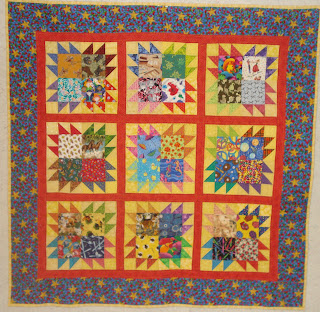 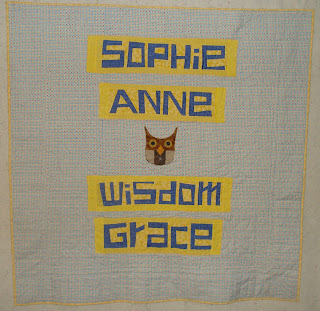 Weekend recap:  I sold three quilts at the library craft fair on Saturday!  In turn I purchased a few Christmas gifts and indulged in a batch of delicious peanut brittle.

Back in the studio: here's Sophie Anne's quilt, all finished except the label.   I had planned to put the words in the border but it was too much yellow.  The starry 'stained glass' print reins in the brights without dulling them. The words work just fine on the back along with a little owl. (The nursery has an owl theme.)....and Sophie Anne isn't due until the end of this week!

"Jolly Jester" will be swapped at the P.E.O. Christmas ornament exchange. (I maintain that ornaments don't have to go on the tree.)  This wallhanging is 18 x 24.  The pattern is by Pat Sloan. It was featured in the December, 2006, issue of McCall's Quilting.

And, finally:  my progress on Step 1 of Orca Bay, the 2011 Quiltville mystery.  I'm using Bonnie's colors (black, neutral plus red and blue).

Check out other design walls at Patchwork Times and other Orca Bay progress at Quiltville's Mystery Monday. 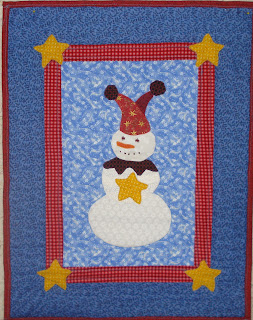 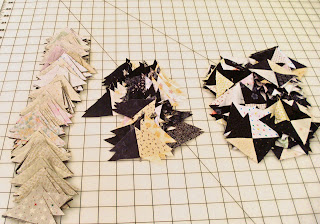 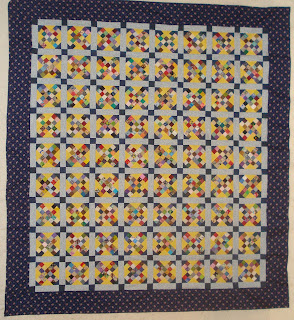 Finished!  It's 72x80 and used 5-7/8 yards from my stash.  The border is a Cranston print that  I got from the estate purchase in 2007. It worked just fine for this very scrappy design. 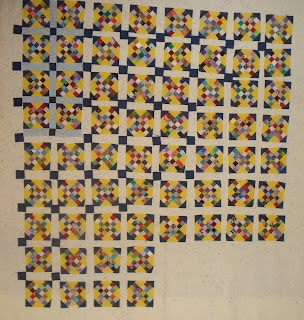 I put the baby quilt (see last week's post) aside for a bit. I ought to get going on Christmas items.  I know what I'm going to make and I just have to get started.  But, instead, I took handfuls of 1.5" squares, sewed them into twos and then fours and here is where I ended up.
This is "Four Patch X" from Bonnie Hunter's "Addicted to Scraps" feature in Quiltmaker magaine.  Her pattern uses 2" squares but I am sure she would be the first to say it's okay to use any size!   My blocks are 6.25" unfinished, and thus 5.75" finished.   I think the light blue sashing will provide a visual relief from the bright yellow. It will also bring out the shoofly design made by the block corners and the cornerstones.

Be sure to check out what other quiltmakers have on their design walls today! 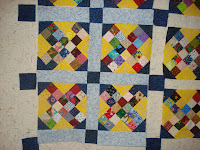