Weekly update: hurrah! and on to new creations + reading 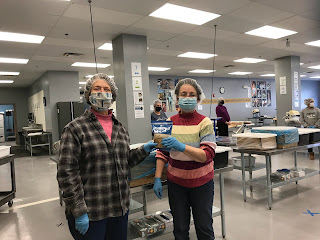 Kathy and I took a shift at Feed My Starving Children on Tuesday as the Zion Woman's Club's "day of service."  FMSC packages a fortified rice mix that is shipped worldwide.  Though it would be easy to automate the entire process their model is to get people involved and motivated to donate by inviting them to pack the product. 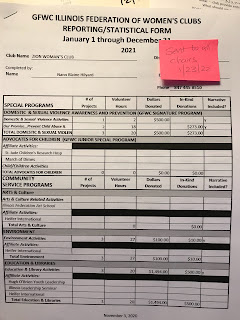 WHEW.  I finished the two big projects that have preoccupied me all month.

One is the annual reporting for the GFWC (General Federation of Women's Clubs). That documentation not only qualifies our club for awards but also helps the international organization leverage its influence with partner agencies like Heifer Intl., Operation Smile, and others.   (This photo is the statistical spreadsheet. There's narrative for each section, too.) 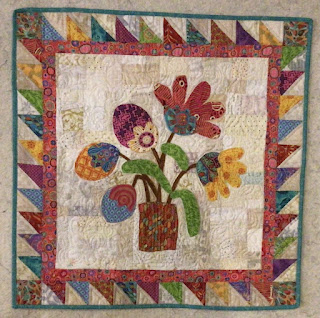 And, ta da!  My MQG swap entry is QBL (quilted, bound, and labeled).  I had planned to deliver it in person  at QuiltCon in Phoenix, but I'm not going so Iwill mail it.

The applique design is by Piece O'Cake. The crumb/slab background was inspired by Jen Kingwell. 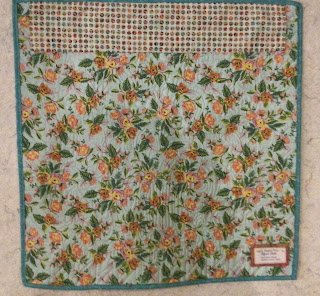 This is my OMG for January. 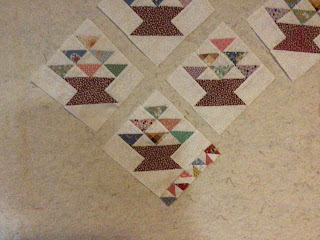 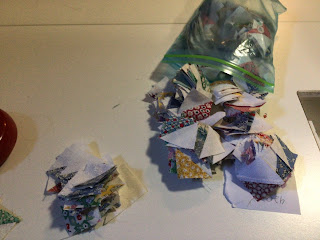 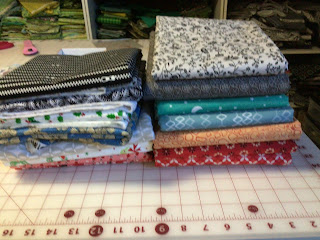 I didn't have anything that would work for the setting triangles and border.  Sew & Save in Racine had an inventory sale. I went up to see if they had any 30's remaining (they've been phasing them out). All gone. The clerk suggested looking at Lori Holt's retro prints.  I found a couple that may suit. While I was there I succumbed to the $5/yard clearance selection.

If I can't resist buying fabric at least I can get bargains! 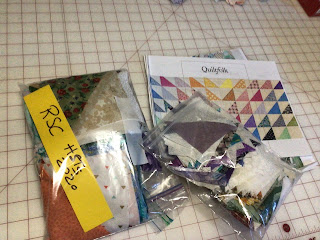 Did I say triangles?  An email from Quiltfolk announced a February sew-along and contest.  It may be just the thing to use these HSTS that have been in the Parts Department for a long time.

By coincidence the two books I read are mysteries set on college campuses.  The similarity ends there.  The first is a police procedural and the second has some sharp send-ups of academe. 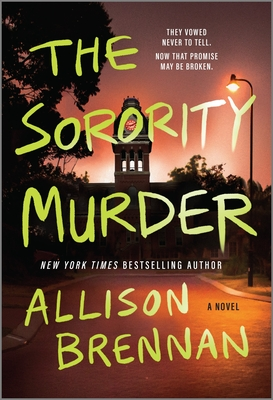 Three years ago Candace Swain went missing after a philanthropic/social event hosted by her sorority at Northern Arizona University. Her body was found a week later but authorities never found a perpetrator let alone a motive. Now NAU senior Lucas Vega is using the cold case as the subject of his capstone project, a multi-episode podcast. Regan Merritt, former U.S. Marshal, is back home in Flagstaff after her own family tragedy. She's living with her father, the retired county sheriff. Lucas's NAU advisor asks Regan if she could consult on Lucas's project. She agrees and gets pulled in. Someone doesn't want this old business dredged up. Is it one of the sorority members or an outsider? The plot gets more complex and the threats extend to Lucas and Regan. 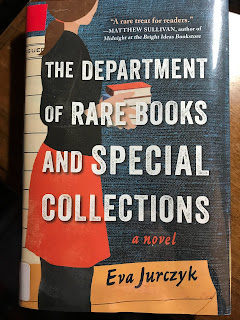 Liesl Weiss is called back from her sabbatical from her long-time job as assistant director of the Department of Rare Books and Special Collections when her equally long-tenured boss Christopher suffers from a debilitating stroke. Liesl's first task is to account for the library's newest big-ticket acquisition, a polyglot Bible. But where is it? Not in the safe where it is supposed to be. One thing leads to another and another as Liesl has to deal with the university president, the wealthy donors who want to see the results of their donation, and the library staff -- plus her emotionally fragile husband.Liesl is presented in all her complexity -- something of a mess, really, as she deals with lack of confidence about her professional abilities, drinks a LOT of alcohol, and keeps her husband on balance (and herself in the process). When one of the staff goes missing she chastises herself for not being a more attentive supervisor. She is tempted to rekindle a long-ago fling with one of the other librarians. Evidence of more theft and deception comes to light.Anyone who's dealt with academics will recognize the personalities. (Are they only slightly exaggerated for effect here?) The mystery is resolved, the motive is revealed, and the new library director is named. 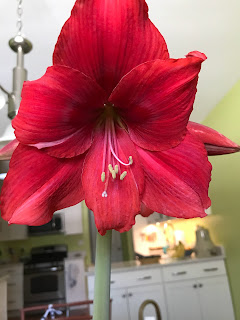 P.S. One of the four big blossoms on this year's amaryllis.