I was beginning to despair that I would not find suitable shoes for our granddaughter's October 23 wedding.  I didn't want black.  I didn't want too-strappy (partly October and partly that I have bad feet). I can't wear pointy toes or high heels.  The dress (see it here) is silver-blue, further limiting the color. Why, oh why didn't I start shopping two months ago?  Anything possible on online sites was not in my size.   No luck at two DSWs (but I found a pair of navy casual shoes which will be great for fall). No luck at Rogan's. ("We've had a lot of people shopping for dress shoes," the clerk said. "Did you try J. C. Penney?" as I purchased a pair of Keen sandals (20% off).)   No luck at J. C. Penney (no purchase, either). Then I went to Chiapetta's, a full-line store that sells shoes for all sizes (a good orthopedic trade).   The salesman measured my feet (when was the last time that happened?) and brought out a stack of shoeboxes.

Not what I expected but perfect. And perfectly comfortable.

In the studio:  the slab blocks are all set. The tilted triangles are tricky.   Per Bonnie Hunter's instructions, the straight grain is sewn to the block. The outer edges are a slight bias. And that slight bias stretched.  Will the stretch quilt out?  I hope so. I pressed assertively. I'll baste heavily.  56 x 63, 4-1/4 yards used.

My One Monthly Goal for September was to complete the AAUW holiday quilt. I did that and took it to LeAnn-the-quilter on Thursday.  I've shown the photo but I'll repeat it for the sake of the OMG September Finish Link Up 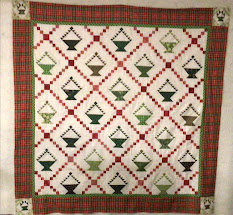 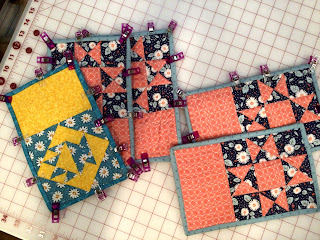 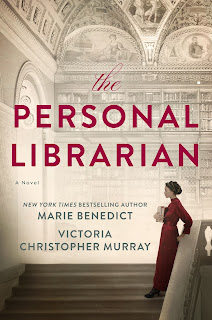 I first learned about Belle da Costa Greene earlier this year when Smithsonian magazine published an article about her. The article referred to Heidi Ardizzone's biography "An Illuminated Life." I borrowed the book from the library but it was 450 +/- pages and I just couldn't concentrate on it. I was delighted to learn about The Personal Librarian -- Belle's story in an easier-to-read (and much shorter) format.The story is fascinating and illuminating on many levels. Belle's father Richard Greener was the first Black graduate of Harvard. He was a professor at several colleges including Howard University School of Law. Belle's mother's family were well-established in the Washington Black community. The Greeners separated and Mrs. Greener took the six children to New York -- where they changed their name to Green and their family story to pass as white (of 'Portuguese' descent). When Belle worked in the rare books division of the Princeton University Library she attracted the attention of millionaire tycoon J. P. Morgan who was investing in rare books and manuscripts. He hired her as his personal librarian. As Benedict and Murray tell it, Belle was instrumental in acquiring many valuable items for Morgan. She mingled with the elite of the early 20th-century (pre-WWI) art world including the critic Bernard Berenson, with whom she had an affair. (Berenson had many secrets about his own origins.)There's suspense -- will Belle slip up and reveal her true origins? Will she reconcile with her father? What about Berenson, after all? And how close was she to Morgan?[My quibble is with a few anachronistic references. For example, "how close you and your dad were" (150)--dad? not father? "That's okay," p. 150. "That's part of my job description" (172) -- was that term used in the early 1900's? Frequent references to "back home in DC," "going to DC." Calling it DC without punctuation seems very 21st century.]

Hum, I've twisted blocks before but don't remember any problems with the bias. I had to check MaryQuilts.com twisted instructions and yep the outside edge is bias. It really makes blocks look different when they are twisted. I've got the Personal Librarian on my to read list. I think it will be interesting. Thanks for your review. I agree with you re: anachronistic references. I'm wondering whether 'pa" would have been used instead of more formal father? I'll get to it one of these days.

I share your pain on buying shoes! I enjoy reading about your ramblings as well as seeing your quilts. I'm going to put Personal Librarian on my book list. Right now I'm wading through The Invisible Life of Addie LaRue.

Beautiful shoes! I spent a lot of time shopping for tennis shoes recently with no luck. The Achilles tendonitis has put a crimp in my love of shoes.

I loved The Perfect Librarian. It was an interesting read- different from what I had been reading. Your "slab block" quilt is intriguing.

Love the red shoes!! High heels are a thing of the past for me.

Thanks for linking up with Elm Street Quilts One Monthly Goal and congrats on your finish!