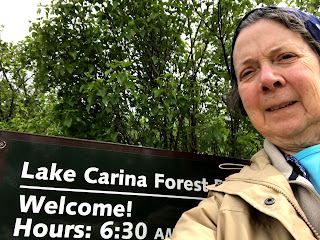 I hope everyone had a pleasant Mother's Day!
When we began exploring the forest preserves the walks seemed longer because I wasn't familiar with the trails.  The path around Lake Carina, a reclaimed gravel pit, is just a mile. 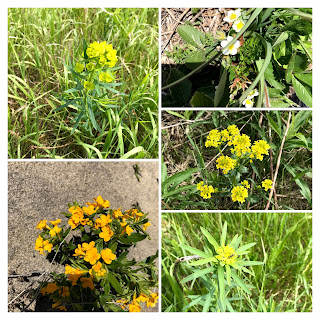 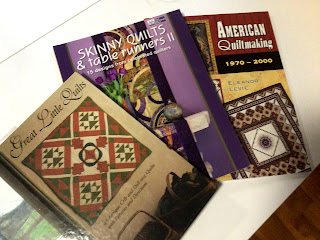 Eleanor (Ellie) Levie was the quilt guild speaker Wednesday evening by Zoom (she lives in Philadelphia).  Her lively presentation  "American Quiltmaking 1970-2000" is a version of the book she wrote (see photo).  I have owned Great Little Quilts, her first book, for ages -- I told her that I have yet to make anything from it. She laughed and said that it was written in response to the quilts-as-folk-art discovery of the late 70's and all the instructions are pre-rotary cutter. 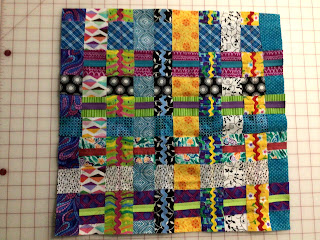 On Thursday morning I attended Ellie's  Zoom workshop "Weave a Quilt With Me."  Her fused-strip weaving technique is one of the designs in the book Skinny Quilts and Table Runners II.  The workshop had five attendees from my guild and five from a guild in Houston.  I chose to create a panel (about 16 x 16) that I'll use on a tote bag.  Here's what I made. 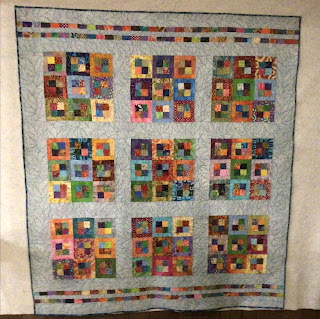 One of my May goals (see the previous post) was to assemble a quilt back. I did that, and now the quilt is finished.  I made the flimsy earlier this year.  Can you see the difference?  I reworked the border by slicing the squares and inserting a strip of the background. I like the lighter effect. 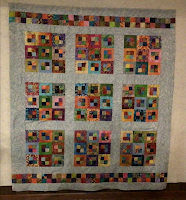 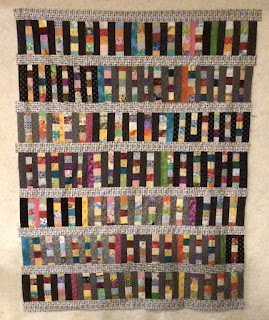 The surprise is this flimsy. I had leftover five-patches from the Waffle Stamps quilt. I made big slabs with a variety of black and dark gray strips.  I used all but about 8" of the gray/white sashing print.  It's 48" x 63" and used 3-3/4 yards by weight. 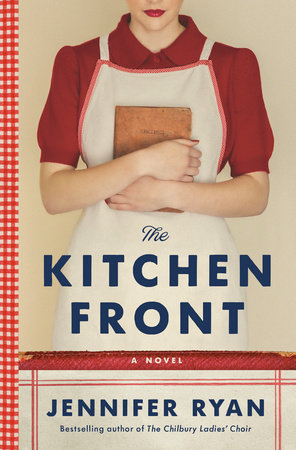 I finished two books this week.

Jennifer Ryan's third novel is again set in WWII England.  It's been praised (like this NPR review).  For me, though the premise is charming, it doesn't fully deliver.* Set in a village in Kent (I think) in 1942, it features four women who are coping on the home front -- war widow Audrey, raising three sons and eking out a living baking pies and bread (despite wartime rations); her sister Gwendoline, trapped in an abusive marriage to a war profiteer; Nell Brown, the assistant to the cook at the manor house; and newcomer Zelda Dupont, a professional cook resettled to the village while awaiting the birth of her illegitimate baby. The four women compete to be the presenter in a BBC program called The Kitchen Front designed to help women all over Great Britain make rationed food into tasty dishes. Despite the competition, or because of it, the women overcome their differences and learn that they are stronger together.*Recipes are provided, based on real ration cookery, but the instructions mix British and contemporary American terminology. Measurements are given American-style, by volume (1 cup) rather than by weight (which was ounces in 1940's Britain). Oven temperatures are given in Fahrenheit and Celsius; which did Britain use? The spellings "flavor" and "program" are used but the story is set in England (should be flavour and programme). And Nell and her mentor Mrs. Quince find a century recipe book from 1728 in the manor house. "The lines were close together and at times uneven, and she imagined the ancient typesetting machine tilting with a lack of precision." In 1728? I looked it up: the first British patent for a typesetting machine was issued in 1822. 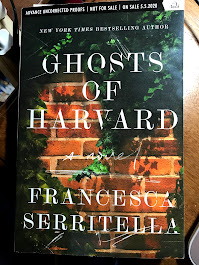 Francesca Serritella's debut novel is a page-turner.  I was pulled right in and kept on reading.

Cadence "Cady" Archer chose Harvard because her beloved, brilliant older brother Eric went to Harvard -- until his schizophrenia forced him to jump out of his dorm room the previous year. Cady wants to find peace for Eric, for herself, and for her parents. She has his final lab notebook with pages written in code. Was it his illness or is there something else? She is determined to find out. Then she begins to hear voices from three people in Harvard's history. They aid her and in return she helps them. But meanwhile there are classes, roommate,s and campus life (I lost count of how many meals she had at eateries adjacent to campus). Cady has the most event-filled first semester of college ever. She and her parents come to terms with Eric's death and in turn they can celebrate Eric's life.

I'm looking forward to the tote bag you make with your woven fabric. We had a small demo on woven fabric but I don't think there was any adhesive holding it together. Love how you've four patches. And, what a great idea for the border. Must remember that! Hum, so irritating when a publisher doesn't do simple fact checking. Have a great week.

Like your bonus quilt! The borders look really good! Books look interesting despite the flaws.

Really like your border modification. I do love squares. And I appreciate your book reviews. I also like the info to be correct. A bit funny when the facts are adjusted to fit the story!
Stay safe and sew on .

Isn't it amazing how a simply strip can make all the difference? The original borders look so 'heavy' in comparison, as though they're squeezing the body of the quilt between them. The New! Improved! borders just seem to float in comparison.

Also, a Sweet Adeline friend just revealed the name of her new and first grandchild-to-be, a name I had never heard before: Cadence. Huh.

So many pretty quilting projects you are working on. The "woven " quilt reminds me of a piece that I am working on. Looking forward to seeing yours turned into a tote bag. Happy quilting.

I love both of your scrappy quilts. Splitting that border added a lightness and modern touch.

I grew up with ovens in farenheit and I certainly didn't live through the war.

I like the new and improved border too, what a good idea.

Congratulations on finishing the quilt. The pale strip insert lightens the border. Good idea. It reminds me of Maureen’s border except she inserted a narrow dark strip. I will have to remember this.
Your workshop sounds good and great plan to use your sample. I need to walk in the mornings before it gets too steamy here.