A new home for the redwork

Historic preservation was a popular trend when I lived in Brenham, Texas, in the late 1970's.  People from Houston were discovering Brenham and Washington County for weekend and retirement living.  Both newcomers and long-timers were restoring the town's big Queen Anne houses and less-elaborate dwellings  There was new interest in late-Victorian furniture and decor.   .

Natalie and Charlie lived in what had been the Lutheran Teacherage -- where the (unmarried) women teachers at the Lutheran school had boarded.  The house originally had three rooms down and three rooms up, 16x16x16.  There was a wide hall with a very steep staircase. The wall up the stairs was lined with framed redwork pillow shams.

I was smitten.  I had discovered needlework (mostly needlepoint but also other embroidery). I loved antiques. I was earning a living and setting up housekeeping, defining my tastes and starting collections -- and redwork was among them.

Redwork has been extensively documented and described (here is just one example).  Technically I purchased "outline embroidery" because they weren't all red floss-on-white.  My collection remained modest because as much as I admired redwork it didn't fit my decor (and was not to my husband's taste).  The redwork stayed in a box in the Deep Stash. 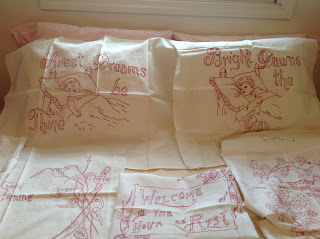 It occurred to me that redwork would be an ideal complement to the decor at Bonnie Hunter's
Quiltville Inn .  I wrote to offer my collection to her and she said yes!   I took pictures before I put the pieces in the shipping box -- but I didn't iron them because then I'd have had second and third thoughts.

These shams are unhemmed. I always thought the child's eyes (on the right) were scary. 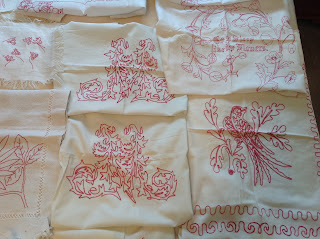 Some of the pieces are beautifully finished. The fabric was fine percale. 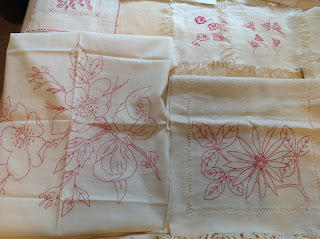 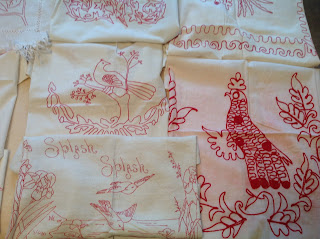 Oops -- someone's floss was not colorfast. 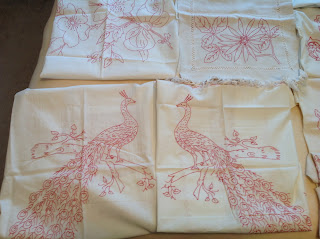 Peacocks were a popular motif. 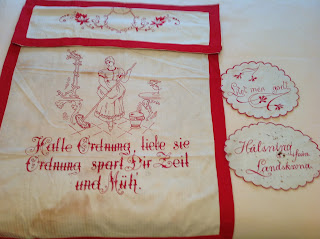 The German piece is embroidered on ribcord fabric. The top piece folds over, like a reverse pillow-tuck. The housecleaning scene makes me think that this was for a daybed off a kitchen, maybe. (The ribcord is too heavy to be a curtain.)

The pieces on the right are Swedish. 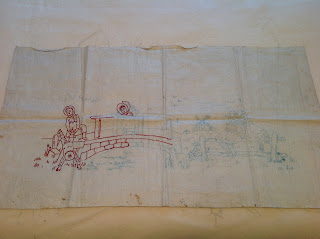 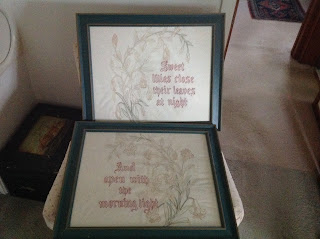 
When I had a guest room these were over the twin beds. 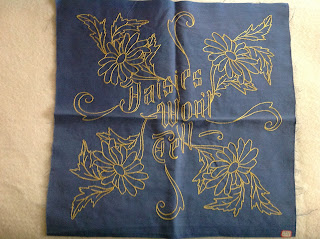 I don't always remember when/where I buy specific pieces, but I do recall this:  an antiques store in Naples, Maine, circa 1993.  The fabric is a heavy-ish twill and it must've been hard to poke the needle through. 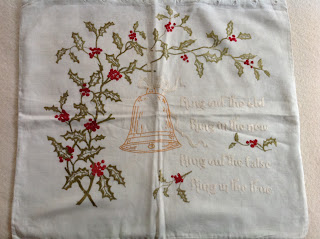 (In Memoriam by Tennyson)

.....certainly a good thought for the new year!