Midweek: OMG and a gift

I needed to finish my One Monthly Goal this week.  We leave for northern Wisconsin on Saturday morning and we won't return until June 30. 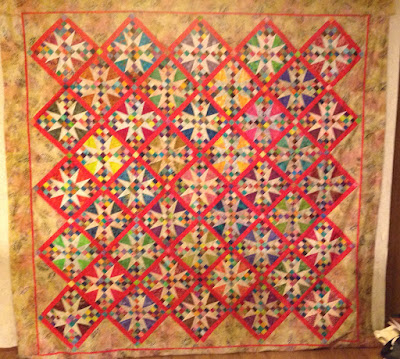 My friend Helen said she was cleaning out cabinets and would I like some fabric? Well, sure!  "I've had it for a long time," she added. She brought it to the AAUW luncheon on Tuesday.  I've been quilting long enough to remember when mint green and peach were a trendy combination.  The assortment includes Cranston/VIP (the good stuff), some Christmas prints, a Jinny Beyer print, and some Waverly light-weight home dec. I weighed it all -- 7 lbs., so 28 yards.  For free! 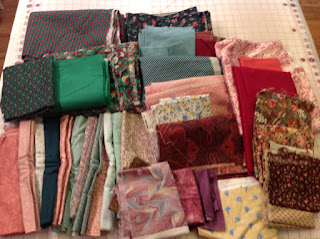 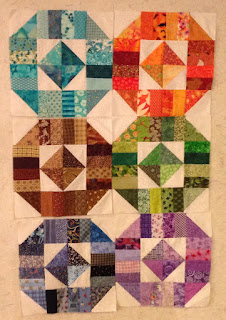 This month's Rainbow Scrap Challenge color is teal/turquoise/aqua.  Here is my June block with its companions. Each block uses 24 different prints of the monthly color.

Block Lotto is following the RSC this year. Here are nine entries for June and an extra (since each fabric combination makes two blocks). 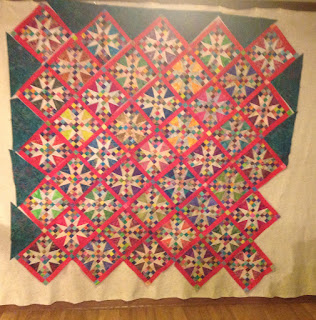 The batik stars have been on my design wall for nearly a month. I knew that taking them down would postpone my doing anything with them, and after all, they are my One Monthly Goal for June.  So I set about setting them.  I began the sashes and considered other batiks for the setting triangles. This green with coral-and-blue spatters seemed promising. I cut lengthwise (borders) and quarter-square setting triangles.  I didn't like the effect: too dark! 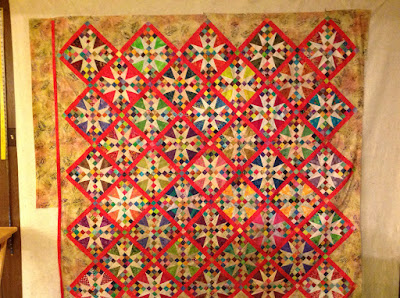 I searched around and found a lighter batik. I think it enhances the light stars. The skinny orange strip will be a flap (cut 1-1/2", folded in half, so just 1/4" when the seam is sewn). 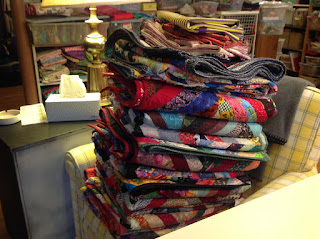 The Northern Lake County Quilters Guild made HeartStrings blocks at the January charity sewing meeting. Ten quilts resulted -- five quilted by me, five by other guild members.  Guild members also made seven pillowcases.  I printed labels and sewed them to each quilt. I made three more pillowcases to keep things even.

On Wednesday Irene and I presented them to the manager at Staben House, a transitional living/homeless shelter in Waukegan. One of the young residents joined us for the photo. 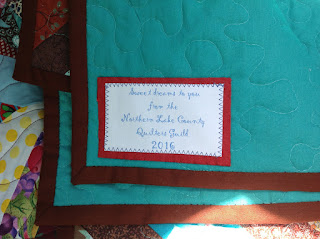 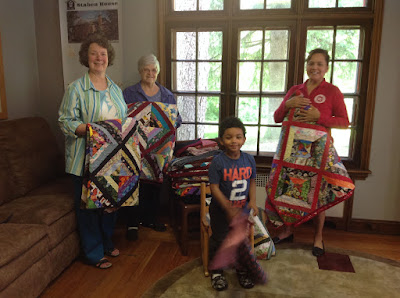 I didn't have much time to sew last week, what with P.E.O. convention preparations, plus an AAUW committee meeting, Chamber of Commerce board,  and the monthly quilt guild meeting (a very good program on quilt history).  I didn't even get time for a beach walk. 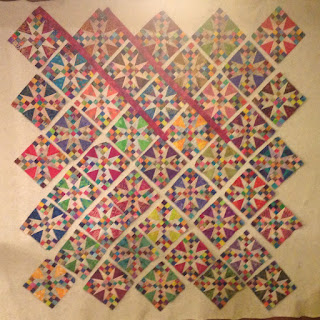 My One Monthly Goal is to set the batik star blocks.  I made 42 of them. The on-point setting uses 41 and results in a square quilt. I am contemplating ideas for wider top and bottom borders to make it rectangular.  The red sashes are a rough draft -- I only have two yards of that particular print, only enough for sashes *or* setting triangles *or* borders, but not all three.

The 114th convention of the Illinois State Chapter of the P.E.O. Sisterhood was in Schaumburg this weekend. That's about 45 miles from home so I didn't have to leave until 9:30 on Friday morning. For three years I've been on the Lulu Corkhill Williams Friendship Fund committee, this past year as chairman.  LCWFF provides grants to Illinois women and men experiencing temporary financial difficulty. Local P.E.O. chapters recommend recipients to the three-person committee. The needs are great and the grants are appreciated. 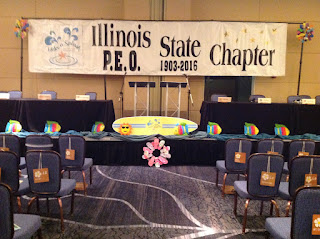 This year's theme, "Make a Splash! The P.E.O. Ripple Effect" was carried out with surfboards, starfish, and flip flops. 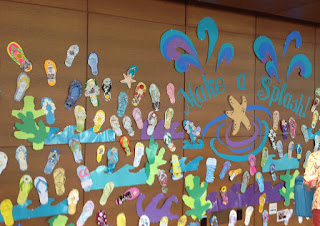 Chapters decorated flip flops with short summaries of how they made a splash during the year.

I decorated my chapter's entry. 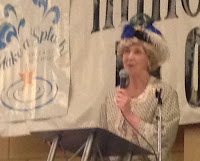 P.E.O. founder Alice Coffin visited us, in the person of reenactor Lynn Rymarz.   Alice was a school teacher who never married. She grew up a Methodist but changed to Episcopalian because she loved to dance! 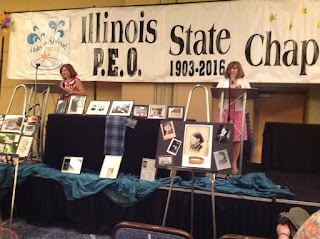 Lettie Corkhill Cunetto and Debbie Corkhill Cortopassi gave a workshop about their Great-great Aunt Lulu Corkhill Williams.  Lulu became a P.E.O. in March, 1869, just two months after P.E.O.'s founding. She was the first initiate.  After college she helped charter chapters in Iowa. She and her husband Hemmerle moved to Illinois where she again chartered chapters and organized the Illinois State Chapter.  The Friendship Fund was started with money left over after the state convention in 1934. (Since then $1,756,000 has been awarded to 1,319 Illinois women and men.)

Many of you remember the New York Beauty quilt that took me all of March to make.  It was the backdrop for the LCWFF display. "Stars in her crown" refers to the time that Lulu, age 15 in 1870, wore her P.E.O. star pin in her hair.  She wrote later that she didn't know any better, but she did it again (about 25 years later, probably in jest).

Each of the 40 chapters that sponsored a Lulu recipient this year got a tiara with a gold star (and the chapter letters). 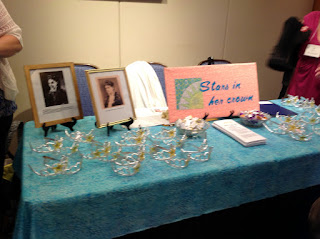 There are 8 yellow stars appliqued on the quilt -- for the seven founders and Lulu, the first initiate.
(My t-shirt lists the original seven.) 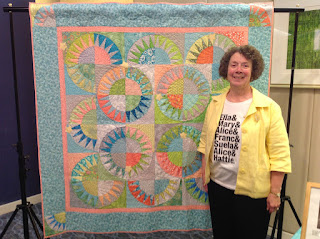 A LCWFF recipient was among the speakers at the Projects Dinner Saturday evening. Angie is a single mom of two daughters who is going to nursing school and working full-time at a suburban hospital. She used her grant to help buy a new car -- reliable and safe transportation.  The chapter that sponsored her has generously helped out in other ways, too.

Committee members Pat and Laura have become friends.  Pat is the new chairman.


Sue is a double sister -- she and I share Alpha Gamma Delta as well as P.E.O.


It was an honor to serve on the Lulu committee. I learned a lot. I am grateful to all the P.E.O.s who sponsor candidates and generously contribute to the fund.