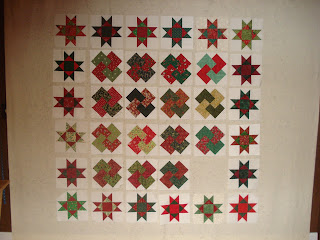 Hmmmm.....
Just sayin'.
Last week's Ohio Star swap blocks combined with the Card Trick blocks from this year's Block Swappers' birthday exchange.  If these were used together I'd definitely have to add sashing. 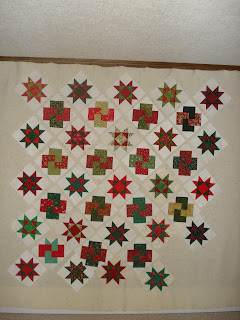 This is month 10 of a year-long documentation project.  At the end of July, on a hot and muggy Sunday afternoon, the ravine is lushly green.  Damselflies flitted everywhere but were too quick for my camera. 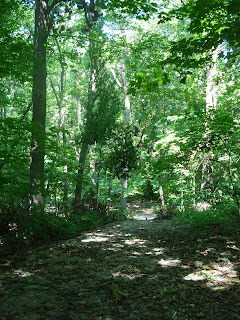 The path to the ravine. (Compare it to the first post). 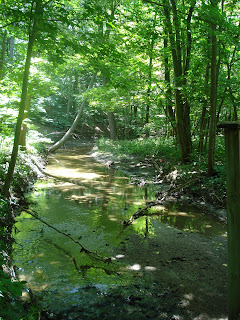 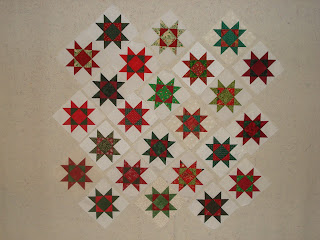 Twenty-four 9" Ohio Star blocks in Christmas colors, red-with-green and green-with-red, courtesy of Sew Many Swaps.  How to set them? I'm thinking about it. 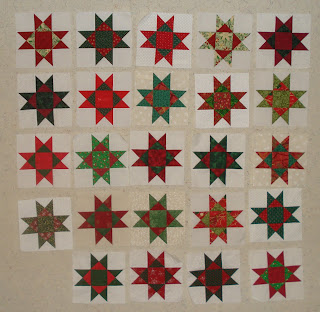 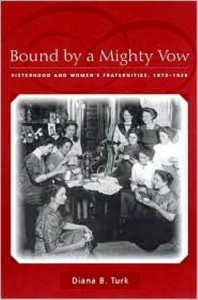 I'm interested in the history of American women's organizations and the nineteenth-century milieu from which many of them arose.  (I belong to several of them -- see my blog sidebar.) When I read a prepublication review of Diana Turk's book Bound by a Mighty Vow I made sure to order a copy for myself.  That was in 2004 -- and this afternoon, I read it (out on the patio, enjoying sunshine, cooler temperatures, and a pitcher of lemonade).

Women's fraternities were founded for solidarity. In 1870, when Theta was founded, 11,000 women were enrolled in college--and more than 50,000 men.   Women's very presence on campus was suspect. Were they competitors or colleagues of male students?  They wanted to prove themselves the intellectual equals of the men.  (In 1873  Dr. Edward Clarke published Sex in Education: or, A Fair Chance for the Girls in which he argued that higher education damaged women's reproductive systems. The book had seventeen printings.  The forerunner of AAUW, the Association of Collegiate Alumnae, commissioned its first research in 1885 to refute Clarke.)

Academic achievement was the emphasis in the early years. Theta and other groups were very concerned that their chapters be chartered only at academically rigorous schools.  By the turn of the 20th century the direction changed to family connections and 'sociability.'  Anti-fraternity sentiment among university administrations led to a greater role for alumnae (and alumni, for the men's organizations).  A model prescribing "the ideal" fraternity woman began, with national standards imposed on local chapters.  The concept of fraternity education (what every member was expected to know) was introduced in the 'teens.

I had wondered about NPC women and their involvement in the suffrage movement.  Turk answered my question:  women's fraternities by and large "adopted positions designed to attract the least amount of resistance or opposition from their membership" (p. 110)  even though they supported the idea of independent, strong women.   Many NPC women were suffragists because of their own convictions, not their fraternity affiliation.  (I suspect that that was the case for P.E.O. as well.)

I very much enjoyed this slice of women's history -- I'm sorry it took me so long to read it!
Posted by Nann at 6:34 PM No comments: 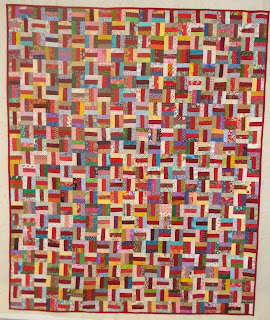 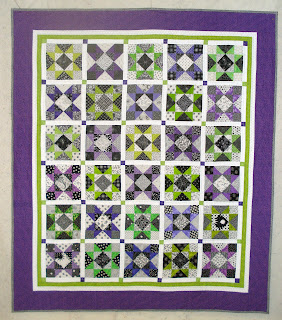 I did a freemotion loopy 'flower' in each star, zig-zag through the sashes and narrow borders, and my default 'triangle vine' in the border. 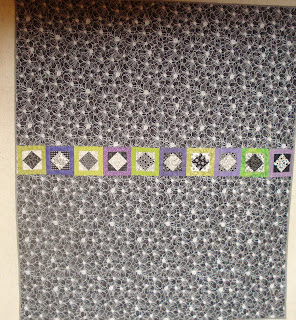 I bought four yards of fabric for the back and two 1/2-yard pieces of lime green, one of which I used for the inner border.  That boosts my *total* fabric purchases since November 1 to a whole 25 yards!

I didn't need to insert the row of SIS blocks into the back but I like the effect.
Posted by Nann at 6:54 AM 13 comments: 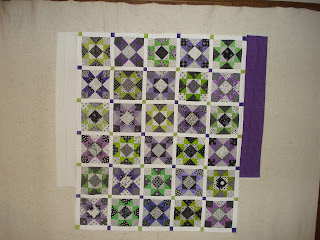 I had great fun making stars from the square-in-square blocks (see my previous post).

Does anyone have advice about what to use for the border?
* Had I made all the cornerstones lime green then a purple border would be ideal, but I am not inclined to rip out and rework all the sashing!
*A white-on-white border would emphasize the modern/contemporary effect I want.
*A piano key or braid border would be way too busy.
*A black/white or white/black border will overpower the stars, I think.
* Purple is the recipient's favorite color.  This pictured purple fabric is the one that I have in sufficient quantity for a border.
Posted by Nann at 9:16 PM 19 comments: 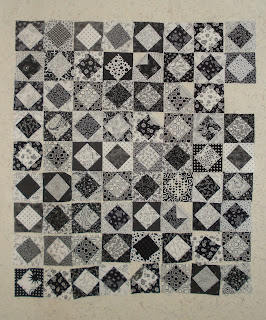 Color scheme:  black, white, purple, green.
Due date:  next month.
What to do?

I just happened to have 4.5" black and white square-in-square blocks on my design wall. They came from a Sew Many Swaps exchange.


Here is the result so far.  These variable stars are 8.5".   I'm not sure how many I'll make, or what the sashing will be like....I think this is enough inspiration for one evening! 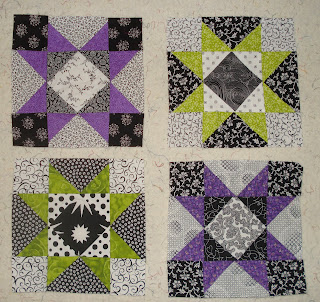 Here's the vegetable garden (in contrast to five weeks ago): 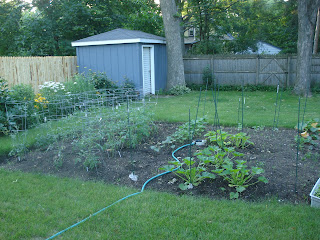 And Shasta daisies in bloom: 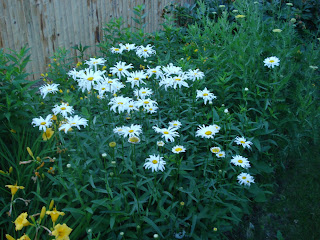 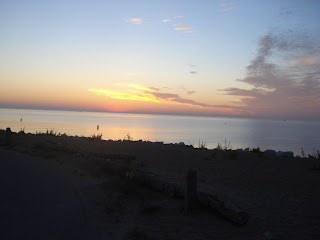 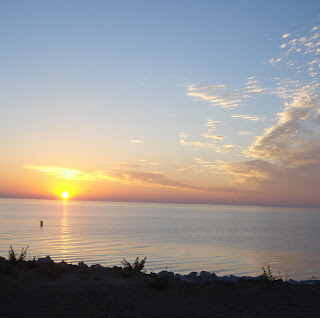 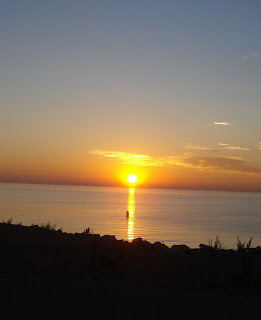 I was going to take the monthly ravine photos this past Thursday (June 30) but at 8 p.m. a "supercell" or microburst storm hit.  It lasted about 5 minutes and felled dozens of trees in our town.  We lost only two branches from the maple tree in the back yard which did not harm anything.  However, the electricity was out for 47 hours and 50 minutes!  We have a gas water heater so we had hot water.   A predicted heat wave (95+) did NOT come, and the temperature only got up to 82 inside the house.  What I missed the most was having light in the evening.

The ravine did not suffer much in the storm.  That makes sense, since its trees are sheltered.  Now in mid-summer it is wonderfully green.  There was no rain this past week so the creek is fairly low. 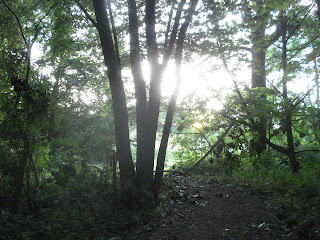 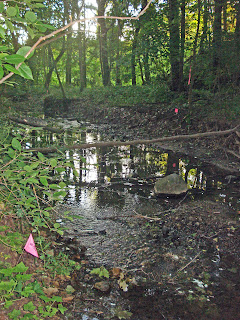