It was a pleasant weekend, both at DH's and at my house. We had our first long rambling walk of the season though the riverside park. (No mosquitoes yet.) I put in some tomatoes and basil. I am so not a vegetable gardener but maybe this year I'll get a crop. It was nice to sit out on the patio yesterday afternoon! (What a contrast today: it's 38 as I type this, going up to 60. Brrr.)


A half-step forward, a couple of steps sideways, and a leap back . . . that's my stash story. I spent much of last week working on a quilt that will be a wedding gift. After I got the blocks assembled I realized I didn't have the "right" border fabric. Joann Fabrics had a holiday sale with 10% off the entire purchase so I got fabric for the border and the back AND 10 yards of quilt batting (also on sale) AND just a few other yards. But it was all on sale!
I used up a stack of 3" squares making mini 9-patch blocks. I have discovered that these are fun to have on hand when "just sew something!" urge strikes. 200 mini 9's uses 1-5/8 yards of fabric. 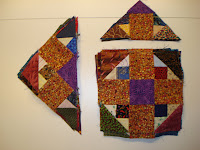 Here is Step 5 of the Crush mystery. The orangey fabric is one of my purchases from England specifically for this project. The purple just looked right, and I used the same purple in all the blocks (rather than a variety of purples). I'm not going to try to figure out how the entire quilt is set--I'll wait until Bonnie tells us!

P.S. As for that border fabric (see second paragraph): it did not pass the audition. I'll have to ponder the design, and my stash, some more. 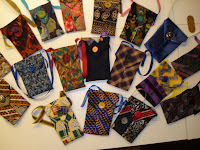 Next weekend is the long-anticipated PieFiesta Dos in Las Cruces, New Mexico! This morning I finished the favors I'm going to give to my fellow Magpies. These little pouches are made from neckties, of which I have a few hundred (vbg)
Posted by Nann at 10:42 AM 5 comments:

Caught up on the mystery 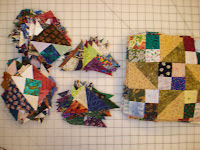 Pentecost, and this week's sewing accomplishments

I'm not a mother so I don't get all worked up over Mother's Day. This year it coincided with Pentecost. DH acknowledged the former but emphasized the latter, using Acts 2 as his preaching text. (We also observed, privately, that the sentiment "God could not be everywhere so He created mothers" is inaccurate, bordering on the blasphemous: God can be anywhere God wants to be. God IS omnipresent.)

My lawnmower is still at the shop awaiting its annual tuneup. (Every March I remind myself to take it in early, and every April I eventually do.) Meanwhile the grass is getting high, more so because I fertilized it last week. But without the mower and in this chilly, blustery weather, I've done more sewing! 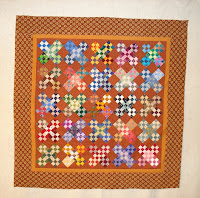 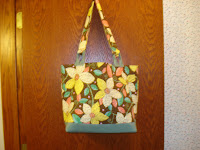 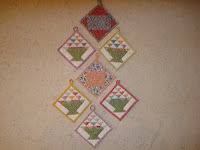 (I don't know how these got lined up this way. If I try to move them I will surely lose them.)
(1) Seven 5-1/2" basket blocks (two are reversed). These were presented at the
annual staff anniversary reception last week. The pocket on the back held a cash card (which we give rather than a plaque or a crystal bowl).
(2) Summer tote bag, adapting the "Newport" tote by Lazy Girl.
(3) "Nine Patch Cross," using 125 of the 3" 9- patches from the BlockSwappers . Both the cheddar/red-brown print for the setting and the larger cheddar/brown border fabric came from my stash. It's 56 x 56.

48 of these 4" bowtie blocks came from a SewManySwaps exchange. I made more blocks (they are soooo cute and so easy!) to create this 44 x 52 top. (I did this at the beginning of last week but didn't photograph it until today.)

....And I did NOT buy any fabric this weekend! 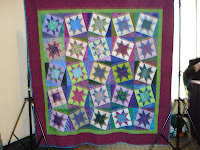 The Twist 'n' Turn Stars were one of the Blockswappers' exchanges last year. I contributed the finished quilt to my AAUW branch to raffle, with the proceeds going to AAUW's Legal Advocacy Foundation (http://www.aauw.org/advocacy/laf/). The AAUW-Illinois state convention was yesterday and today. Ticket sales were brisk! The final tally was $375 and the winner was delighted.

This year's convention theme was "We ARE AAUW." A=Advocacy, R=Research, E=Education, which summarizes what AAUW has been about since its founding in 1881. I've gone to enough state events that I know many AAUW members from other parts of the state, so convention is a time for renewing friendships. Eight women from our branch attended this year, several of whom were first-time attendees.

The keynote speaker was AAUW's public policy director, Lisa Maatz. "We know the world can be changed by one person," she said, "but it's so much more fun to do it in groups." Legislative success requires perseverance, she told us. An example: it took 14 years (7 congresses) to get the Violence Against Women Act passed. "You never know if it is your call or letter that tips the balance for your legislator." Lisa said that AAUW has a reputation as a progressive and moderate organization. AAUW is reasonable in what it seeks; its members are multipartisan. The AAUW Capitol Hill Lobby Corps is the only women's group that lobbies weekly when Congress is in session. Often AAUW is the only gender lens at the table for federal issues: we talk about education in the women's issues committees and we talk about women in the education committees. AAUW's Public Policy Program is determined by the members, who approve the program at the association convention (odd-numbered years).

The Women's Global Education Project was featured in today's breakout session. (http://www.womensglobal.org/) The speaker, Joan Sherman, is a board member of this project. She said that in the developing world 150 million children do not complete primary school; of that, 100 million are girls. Secondary education is a key factor in women's and family success: smaller families, less domestic violence, higher income. She said that these countries have ministries of education and have schools but resources (particularly in rural areas) are scarce, families often undervalue girls' education, etc. The Virginia Gildersleeve Fund (which I mentioned in an earlier blogpost) has given the WGEP grants. Obviously there is more that can be done.

AAUW-IL was instrumental in having December 10 be designated Jane Addams Day in Illinois.
http://www.aauw-il.org/jane.html Watch for an upcoming quilt featuring a block called the Jane Addams Star!
Posted by Nann at 6:26 PM 3 comments: