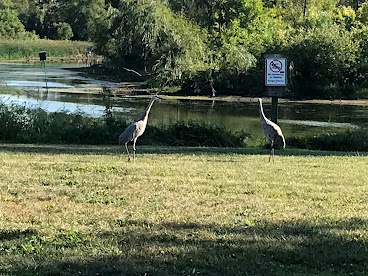 Be sure to read the previous post to see the week's wildflowers and other activities.

On the way back from a lake shore walk we saw two cranes at the edge of a pond in the park.  I was able to get pretty close to them.

This weekend there was an estate sale about three blocks away.   I had walked past the house often but I didn't know the people who lived there.  (I looked them up: he died in 2012 and she died earlier this year.) I went on Saturday when  everything was 50% off.

There were three undistinguished Kenmore sewing machines, a huge bin of embroidery floss in ziploc bags, sorted and numbered by color, the usual assortment of cross-stitch leaflets and evenweave cloth. 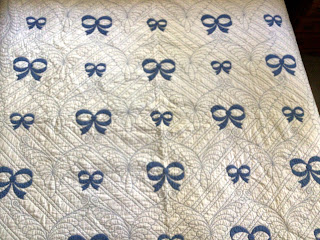 I think the bow quilt is a kit. The bows look like they were die-cut and the elaborate quilting design ooks like follow-the-dotted line. 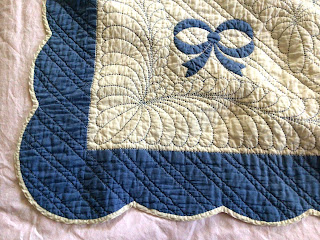 I have another quilt from the 1930's that is quilted with blue floss. 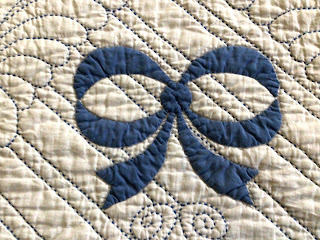 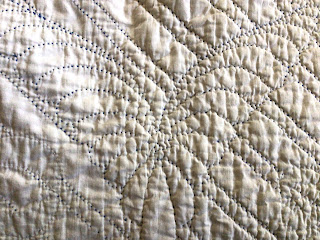 The thread tails are expertly buried on the back. 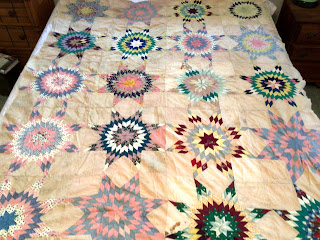 These Lone Stars are hand-pieced. The background is osnaberg-ish (rough texture).  They all lie flat.

A couple of the blocks are in rough shape but I can salvage several others. 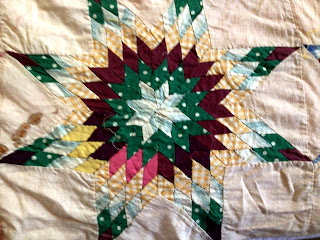 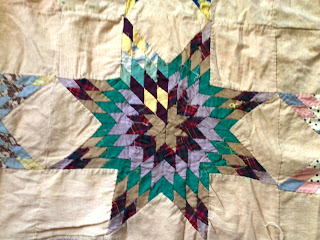 The third quilt is very, very lumpy.  I had to buy it because of the signature blocks -- who were these people? Where did they live? How did the quilt end up in northern Illinois? 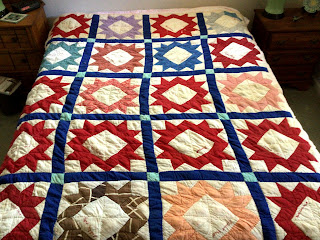 Thanks to Ancestry.com I was able to trace the quilt to Itawamba Co., Mississippi.  (Two of the names are Zelon Jackson and Lelon Jackson -- unusual enough to be easy to find.) Beatrice "Beddie" Petty was the grandmother of the man who lived in the house.  The man's mother and three aunts also signed blocks. (Beddie had eight children.)

Beddie's son, his wife (a block-signer), and their family were among the many people from the Tupelo, MS - Red Bay, AL area who migrated to Waukegan to work in the factories during WWII and into the 1950's.

I think I've figured out what church all the signers went to.  It's still in business and I'm going to send it to tthem. 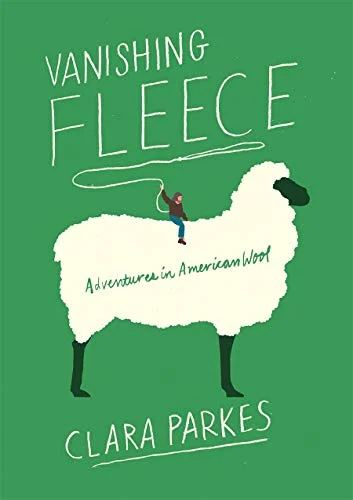 I finished just one book this week.

Vanishing Fleece was published two years ago. I'm sure that readers who knit know all about it since Clara Parkes is a very well-known chronicler of knitting and wool.  It will be of interest to quiltmakers and anyone who works with fiber and fabric.

Parkes’ experiment in processing a bale of wool takes her from the New York sheep farm to processors in Texas, Wisconsin, Pennsylvania, and Maine. There is a lot that goes into the production. As a result of her investigative reporting I am more informed and far more appreciative —particularly in the science and technology involved.

It's a "shear" delight. I give it five stars!