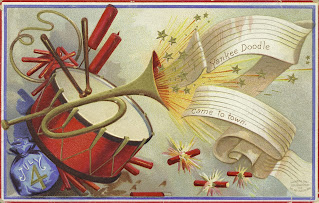 Happy Independence Day!   I hope you and your family celebrated as much or as little as you pleased. (We stayed indoors in the air conditioning.)
# # # # # # # # 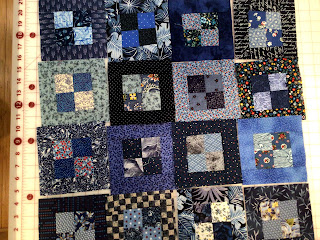 Dark blue is the July color for the Rainbow Scrap Challenge.

This year I  am making 16 framed four-patch blocks each month. They're 5.5" unfinished. 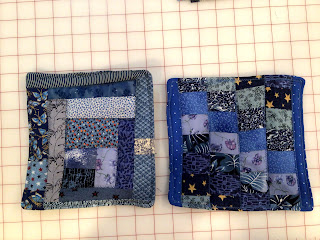 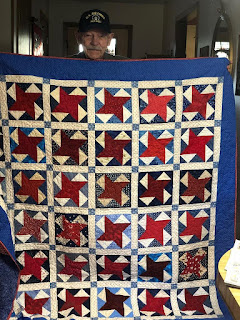 I picked up the Magpies' hug quilt at the beginning of the week.  LeAnn did a great job with the quilting. I attached the binding and mailed it off. Here's Mr. Mag-guy.  (In his thank you message he reported that his treatments have gone very well.  Hooray!) 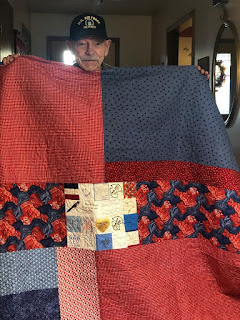 This week's reading was very varied. 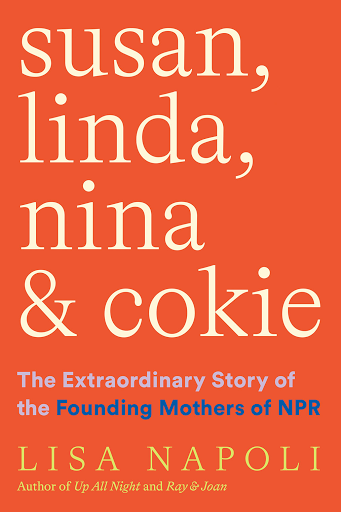 On May 3, 1971, Susan Stamberg's distinctive voice introduced the very first episode of All Things Considered on National Public Radio. She was joined by investigative journalists Linda Wertheimer, Nina Totenberg, and Cokie Roberts. The four women had very different backgrounds and education. They became fast friends -- a necessity to succeed in the male-dominated world of journalism and the brave new world of public broadcasting. In addition to the women's stories Napoli tells about the early years of NPR as it succeeded "educational" radio stations, fought to keep its federal subsidies, and suffered several waves of mismanagement.Broadcast journalism has come a long way in 50 years. Susan, Linda, Nina, and Cokie played a large part in that evolution.~ ~ ~ ~ ~ 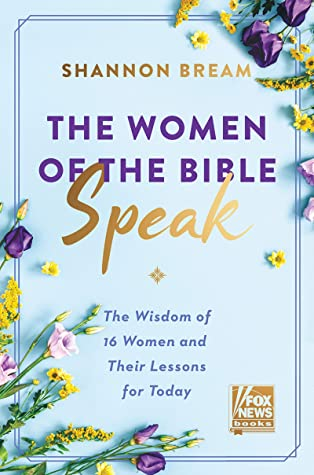 A friend lent me this book, saying that I'd really enjoy it. I approached it with skepticism. Not only was the "Fox News Books" imprint a warning, so also were the author's credentials -- more precisely, the absence of credentials. (Covering the Supreme Court for Fox News does not qualify her as a Biblical commentator, despite years of Sunday school attendance.) True, the stories were interesting. It had been a long time since I read the stories of Old Testament heroines. However, other than quotations from the Bible there is no evidence that the author consulted any scholarly works (and there are plenty) to provide context and to amplify her opinions. Furthermore, all the Bible quotations are given with no reference to the translation she used. That translation is copyrighted; apparently violating copyright didn't matter to Bream or her editors.P.S. Two red flags: Bream states that Moses wrote Genesis. Tradition may say that but scholarship does not. Also, p.48 states that "the greatest member of the nation of Israel ever to be born, Christ our savior, was the child of the lesser-loved wife." What?? 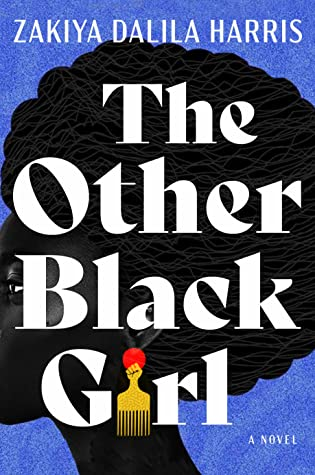 Be careful who you befriend. I figured out that message just a few pages into this story about young Black women in the too-white world of New York publishing. Told by Nella as the unreliable narrator, its ending was certainly not what I expected.

Love those framed four patches. Those are going to make a great scrap quilt. Thanks for sharing with Oh Scrap!

Your framed 4 patches in dark blue are cool and pretty! I love the hug quilt, too. Thanks, as always, for the great book recommendations - I just checked out the ebook of susan, linda, nina, and cokie.

Nice work on the framed 4 patches.

You are so on top of the RSC... I'm still fussing away on my Positivity Quilt. At least you read the book a friend gave you. I'm not sure I would even try it. Glad you were able to get the Magpies' hug quilt done. (and hopefully saved postage too!)

Nice start on BLUE month for the Rainbow Scrap Challenge and congrats on finishing up your TABLE SCRAPS Challenge SEW early in the month, Nann!!! Glad to hear the recipient of your lovely quilt is doing well with his treatments.

How wonderful that your latest quilt already reached its recipient. It will certainly help him. And the NPR book sounds interesting. I've enjoyed listening to them over the years.

I am liking those dark side blocks!!
and your quilt!! lovely!!!

Your framed 4 patches look great. Congrats on the finish, Magpies' hug quilt looks great. As you said very diverse reads. I may have to get the one on NPR, they are some of my favorite journalist on NPR.