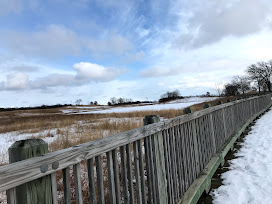 We revisited Pine Dunes Forest Preserve on Sunday afternoon.  A hiking stick with a carbide tip was a welcome accessory on the packed-snow (sort of melting) trail. 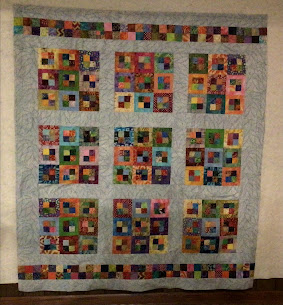 The framed four-patch batik project is now a flimsy.  In retrospect the borders (made from 2.5" squares) are a little heavy. I'm not sure whether I'll change them (smaller squares? piano keys?)...no rush. 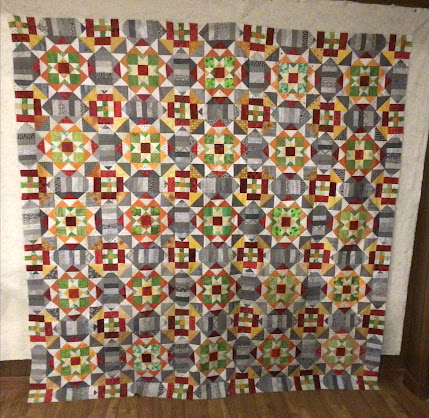 Grassy Creek is three-quarters of a flimsy. All the blocks and the sashing are assembled.  To come:  a different sashing around the perimeter, an inner border, and an outer border.

I fussed around with color placement--specifically, the gold corner triangles and the gray edge triangles -- but I was able to use a wide range of fabrics in each color so they're pretty evenly distributed. 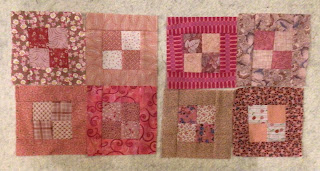 The framed four-patches inspired a few pink blocks. I expect I'll make them in other RSC colors. 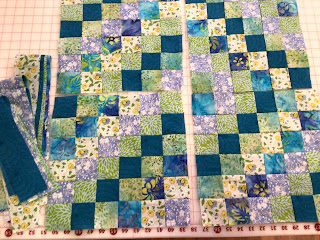 The Magpies are making a quilt for our dear Celia's beloved granddaughter.  Each of us got six fat quarters from Celia's stash. We're to make as many Scrappy Trip blocks from them as we can.
# # # # # # # # #
This week's reading included two 2020 novels that were very compelling.

Gifty is a brilliant neuroscience graduate student at Stanford whose research involves stimulating the brains of laboratory mice to measure their choice and risk behavior.  She says, "In my work I am trying to ask questions that anticipate our inevitable recklessness and to find a way out but to do that I need to use mice." (p. 226)
Her own choices/risks come from her upbringing in the urban south, the child of Ghanaian immigrants. She grew up in the shadows: of the Pentecostal faith that her mother enthusiastically embraced, of her father who could not adjust to America and returned to Ghana, and always in the shadow of her adored athletically gifted older brother who died of a drug overdose while still in high school. 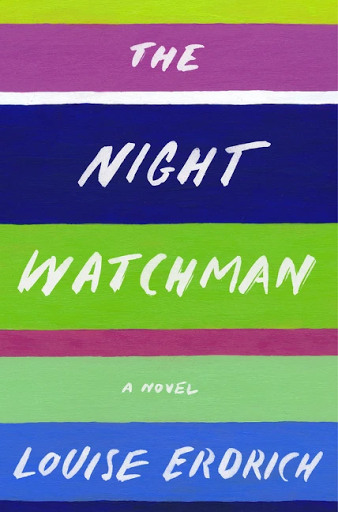 Louise Erdrich draws on the true story of her grandfather, a Chippewa on the Turtle Mountain Reservation in North Dakota.  In the early 1950's Congress considered major legislation to remove the tribe from the reservation.   The story is more complex than this grassroots advocacy effort (a decade before Civil Rights activism in the American south and two decades before the American Indian Movement).  The other story threads involve Patrice Paranteau who is determined to better herself and help her family.  She travels to Minneapolis to try to find her sister.  She confronts two men, one native and one white, who think they are in love with her.  There are teachers and townspeople, farmers and factory workers. The characters are memorable.
# # # # # # # 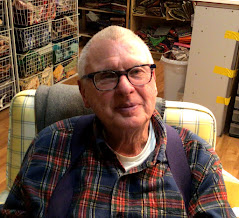 You get so much done each week. I know you didn't make all the blocks for the BH mystery this week but getting it all together takes an amazing amount of time too. Your Scrappy Trip blocks look great. What an interesting setting for the framed four patches. Nice job! Is that a light grey with them?

Wow lots of progress this week, Inspiring! And you get out for exercise too.

Oh and the 3 to 4 fella looks great ! Happy Birthday!

i agree...the grassy creek IS very busy....and many happy returns to stevens!

Happy birthday to Stevens! You have been very productive again as usual. My goodness you get a lot done. The framed 4 patches are cute. Hame a good week.

DH says that same thing every time he sees a photo of himself these days. Funny how we feel one way and look another (perspective on aging). Maybe just a single row of squares top and bottom instead of four patches? Or the two rows of squares with a skinny row of the sashing in between?

great job on moving all your projects ahead! love them all!

I really like your framed 4 patch flimsy! I like the squares for the border, too - they go with your 4 patches. Grassy Creek is turning out beautifully! I just read a Louise Erdrich book recently - The Master Butcher's Singing Club. I'll have to get the one you're recommending!

Happy birthday to your husband. Congratulations on moving so many quilts forward a bit. I followed Grassy Creek but didn't participate. And these two books have been on my list. Your reviews nudge me to start them soon. Thanks.

You sure accomplished a lot with each of those pretty projects. I like the borders on that top quilt.

And I've enjoyed other Louise Erdrich books but haven't read this one. It's going on my list.

Well, I’m a week late (trying to catch up on blog reading), but a belated Happy Birthday to Stevens! As they say “You’re not getting older, you’re getting better”. Of course, it’s only us old folk who remember when “they” used to say that!