Weekly update: a milestone birthday, but not much progress 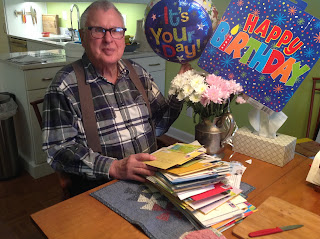 Look who had a milestone birthday on Saturday!  I put out a call on Facebook and via email for in-the-mail birthday cards with the hope that there would be 80.  They've been coming for ten days, up to 130 as of this writing -- from as close as next door and across the street to Australia, Ireland (in Gaelic), and England.  There was a friend from his kindergarten days and colleagues from his library days. The youngest was three and the oldest was, well, decades older. Rotarians, Methodists, AAUWs, P.E.O.s, librarians, and a host of other friends and well-wishers.  I baked a cake and served it at church coffee hour. 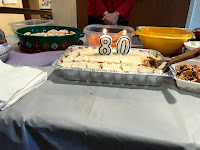 Errands and appointments didn't seem to provide much sewing time.  I've made nine eleven out of the fifteen tote bags for the January OMG -- but I can't post photos yet since they are supposed to be a surprise. 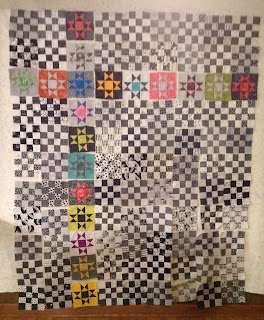 I punctuated tote-bag-sewing by making more black/white 16-patches and Ohio Stars. I think I like this arrangement. "Star Crossed" or some variation of that came to mind for a name.   (Blocks are 6" fin. so this will be 54 x 66.)

The final step for Frolic, the Quiltville mystery, was released Friday morning.  I think it's the most complex design Bonnie has created.  Assembling the blocks and then the flimsy will have to wait until I've finished the tote bags and until after the ALA Midwinter Meeting. I leave this coming Thursday and return the next Wednesday. I've got documents to read and I must get my schedule in order.

Happy birthday to your dear husband. Between cake and sewing, you have certainly been busy.

I love how you laid out your ohio star blocks with those b/w background blocks. Very graphic.

Thanks for sharing with Oh Scrap!

Star Crossed is going to be an awesome quilt!!

Great job in marshaling the birthday celebration. What fun it would be to get so many cards from so many places. Good job Nan. You are making progress on Star Crossed.

I love your "Star Crossed" quilt! What a fun design. The stars really sparkle and shine with the black and white blocks.

Happy Birthday to your husband. Sorry I didn’t get a card in the mail. Hoping the occasion was happy!
Your black and white quilt is stunning! Seeing how complicated the BH mystery is makes me glad I didn’t attempt it at the time! I’m sure yours will be lovely! Safe travels.

It had been years since I had sent an actual birthday card to anyone! After writing Stevens', I wrote one for my mother (1/14) and got them both off in plenty of time. She loves getting hand-written stuff, so thanks for that prompt to make both birthdays special.

See you in a few weeks!

Oops, and I forgot to say Happy Birthday to the happy celebrant. so many cards in the mail is a big joy!

what a fun way to celebrate a big birthday~ many happy returns!
fun quilt

That is quite a pile of birthday cards! How fun! Love the combination of the black and white blocks with the colorful Ohio Stars. I like the off center cross too!

Oh how sweet for all of those birthday card - and wow!! Star Crossed is amazing! Great idea!

Hi Nann! Oh, how fabulous to get so many birthday cards from all over the world. Happy Happy Birthday to DH! ~smile~ Roseanne

Happy Birthday to hubby! The cards in the mail idea is a great one. Your cross quilt is beautiful and the black and white squares make a great background for your stars. Thanks for linking with Design Wall Mondays this week, I enjoyed seeing your quilt, Judy