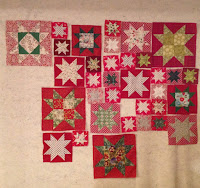 I make a holiday-themed quilt each year that is raffled to benefit AAUW.   Some years the designs come to me more easily than other years.  I thought I had beaten the rush way back in June when I made many red/green/white sawtooth stars. 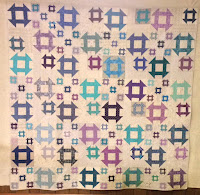 I was going for the look of the churn dash quilt I coordinated for the ALA Biblioquilters, but with 4", 8", and 12" stars. 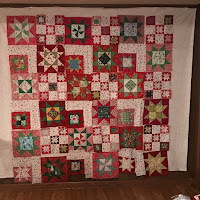 I tried red sashing -- too red.   I tried green sashing -- too green.   I tried light sashing -- a huge mish-mash.  Nothing worked. (But I sewed all the 4" stars into nine-patch units before I realized that.)   I know better than to try to design and sew when I'm frustrated. I put the blocks away and worked on other projects. 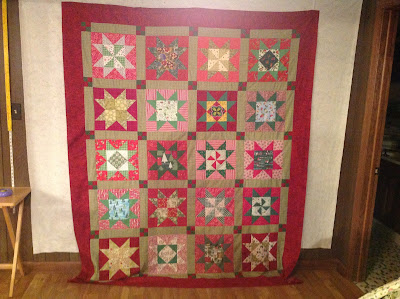 No, I don't HAVE to make a holiday quilt for AAUW. But I've done so for nearly 20 years.  I took out the box and put the 12" stars on the design wall.  What if?

Next problem:  the October 19 AAUW fall conference is a good time to sell tickets.  We leave for our fall trip October 10. Other people can display the quilt and sell the tickets but I have to get the quilt to them before we leave --which means the quilt has to be finished.  I called Barb who has quilted many of  my quilts.  I explained the urgency.  She is involved in a guild show the first weekend of October but she said she can quilt it the day after the show.  (She said that it was a group of AAUWs who taught her to quilt 20+ years ago.)

I pieced the backing, keeping it simple (no blocks on the back to slow things down) and delivered top, back, and batting on Saturday.  WHEW.


I now have two sets of orphan stars for a future project -- but I don't have to rush!

Nice quilt for the raffle and I hope it does well! The second picture with all the blocks appeals to me too! I like the “modern” look of it with the various sizes of blocks. But now you may have your holiday themed quilts done for the next couple of years!

Great job on the raffle quilt. Sometimes, the quilt just has to tell you what it wants. Now you have some amazing leftovers. (Maybe they're "quilt starters"?)

Love the simplified design, it lets the different block centers really show up. Your work will be much appreciated by whomever wins this beauty.

You may think you have 2 sets of orphan blocks to you but to me there is a quilt just about done with the 9 patches. Maybe a sashing or maybe just set the way they are. Or, you could rip some apart and make some blocks with the light fabric in the corners.... (yea, ripping is our favorite activity isn't it!) You've got some fun decisions to make in the future.

I am glad you were able to find a layout you liked and will be able to get it finished within the deadline. I like that layout, and also the leftover quilt with the light background.

Oh, looks like you are going to have three quilts instead of one. Nice! But how can you even think there could ever be any such thing as "too red"???!!! ;-)

Glad that the raffle quilt worked out well. I love the 9-patch stars!!!

I saw the finished quilt at the AAUW Fall Conference. I was completely mesmerized. I think Nan outdid herself this time. The photo really does not do the quilt justice. I go to many quilt shows and quilt museums and I wished I had taken a picture of the quilt. Of course I bought raffle tickets. if I win the quilt I can promise that it will replace my tattered antique Christmas quilt on my bed now and for years to come. Wish me luck!