Last week I wrote about the haul from Fred's storage unit:  fabric, craft supplies, and sewing machines that belonged to his aunt Lillian. Lillian had Alzheimer's in her final years. She died last year at age 98. Fred had been storing her stuff for more than a decade.

It wasn't until Monday afternoon that I could begin opening the boxes to see the treasures.  There was very little yuckiness -- one exception being craft burlap. It smells kind of dusty/musty even when it's new and does not improve in storage.  In addition to fabric there were many, many, many spools of thread, some old (wooden spools) and a lot from the 70's/89's (white plastic spools). Lots of Wright's and Talon bias tape and seam binding (1970's -- poly and poly/cotton).  Lots of straight pins, which I pitched. (Pins can corrode -- keeping them is not worth the risk of  infection.)   Lots and lots of buttons. 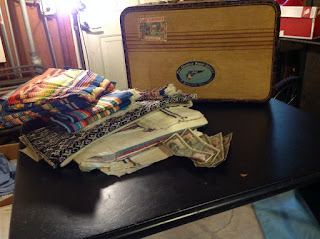 Lillian went to Mexico. The suitcase was filled with ethnic fabric -- and five banknotes, 22 pesos, dated 1943.

There was more money -- a Kennedy half dollar, two dimes, eight pennies. 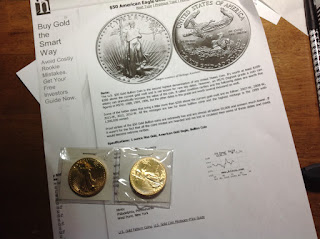 On Wednesday Stevens and I met Fred at the storage unit to get the rest of the stuff. I told Fred, "I found some things of value."  I gave him Lillian's diploma from Chicago Teachers College, the pesos, the change, and then the gold pieces. His jaw dropped, and then he grinned.

There were seven sewing machines.

#2  Pfaff 6. This is a heavy-duty straight-stitch machine. It needs a cabinet or a base -- it is not free-standing.

#4 and #5   Montgomery Ward zig-zag with cams. #5 was never used-- the foot pedal and the accessory box were still in the original plastic wrap. #4 had been plugged in, but the extra feet and bobbins were in the plastic bag.   Manual and warranty (good for 30 years!) still in their plastic bags.

Note the ad for this model.

These Japanese-made machines are all-metal and made to last.
(I gave #5 to my next door neighbor who needed a basic sewing machine. This is basic and a little more.)

#6  Admiration -- a Japanese clone of a Singer 15.  It has been used a lot. There was a pin-keeper around the arm made out of a cut-off flannel cuff.  With a little cleaning and oil I'll bet it's good to go for a long time to come.

#7  Singer.  I didn't get the model or serial.  Another cam machine, though the cams are missing. All-metal, probably late 60's.


And the fabric?  Wow.  Fashion fabric -- woolen yardage, linen, rayon.  A couple of bolts of a Waverly cotton drapery/home dec print in three colorways. Felt. Corduroy. The aforementioned burlap. And lots of cotton made for garments and home dec but certainly usable for quilts.  I filled boxes for our church textile drive (twice a year a recycler picks up any kind of textiles), for the Salvation Army, and for the quilt guild.  I took three boxes to the guild meeting Wednesday and have more for next month.

And for me?  Here's my initial haul.  I am NOT going to keep ALL of this -- more sorting to come. 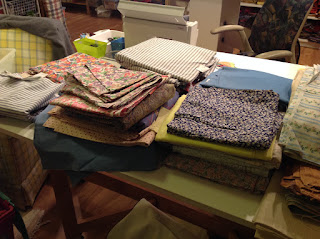 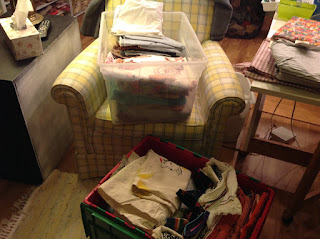 Fred said that Lillian, who never married, taught visually impaired students for the Chicago Public Schools. She used a lot of crafts with her classes.

I will think of Lillian when I use the fabrics from her legacy.

Wow. Kudos for you in helping Fred out. Hopefully all the usable items will go to a good home and have a productive life again.

are you keeping any of the sewing machines? I think that all metal Pfaff has lots of good stitches left in her life.

How nice that you and Fred were able to give Lillian's fabrics and accessories a new, productive home. That's what Life is all about. Sharing and caring about others. Enjoy your personal "haul"!

Wow! What a fun treasure hunt you had. So nice of you to be honest and return the gold coins, etc. Have fun sewing with that fabric-with-legacy.

I love the positive stories about what happens to quilters' fabric after they're gone.