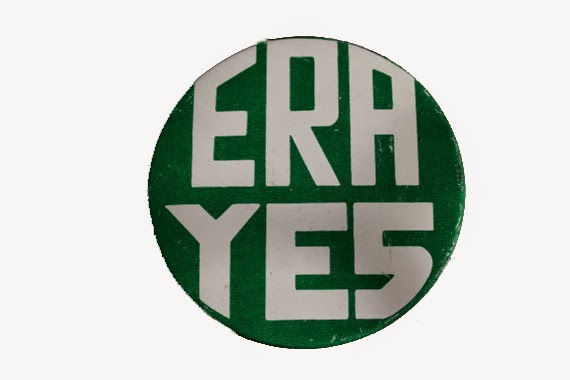 This is my essay for the "Perspective" column in the July 31 issue of the Zion-Benton News.

In 1920 the 19th Amendment to the Constitution was ratified by the then-48 states, guaranteeing  women’s right to vote. In 1923 attorney and suffrage movement leader Alice Paul proposed the Equal Rights Amendment to confirm “equal justice under law” for all citizens.  It states, “Equality of rights under the law shall not be denied or abridged by the United States or by any state on account of sex.” It guarantees equality for men and for women.


The ERA was introduced into every Congress from 1923 to 1972.  In 1972 it was passed by a two-thirds vote in the Senate and the House of Representatives. It was sent to the states for ratification. Between 1972 and 1977 35 state legislatures approved the ERA. Only three more state ratifications were needed for the ERA to become part of the Constitution.

In May, 2014, the Illinois Senate voted 39-11 (bipartisan) for ratification.  If it moves forward in the Illinois House, Illinois will become the 36th state to ratify the ERA.

Senator Heather Stearns (D-Chicago) told the Sun-Times, “Equal rights are not a fad, they’re the fabric of our nation, and the ERA confirms that. From equal pay to equal access to health care, freedom from gender-based discrimination should be the law of the land and not subject to political whims.”

When Illinois state legislators take the oath of office they swear to uphold the state constitution.  Article  I, Sec. 18 of the Illinois Constitution states, “The equal protection of the laws shall not be denied or abridged on account of sex by the State or its units of local government, and school districts.”    That’s right – Illinois has its own equal rights provision!  Why would any Illinois legislator accept equal rights for Illinoisians but deny that national protection to other Americans?

ERA opponents over the years have raised alarmist predictions.   Experience with state equal rights provisions has been that such predictions do not come true.  We do not have same-sex public restrooms or require women to get abortions.  There is no military draft and current military policy is “intended to ensure that the best qualified and most capable service members, regardless of gender, are available to carry out the mission.”  [https://www.sss.gov/wmbkgr.htm]  Courts have been moving in the direction of sex-neutral standards in family court decisions.  [http://equalrightsamendment.org]

Wonderful essay; I learned a lot!