This past week was nearly as busy as the week before.   Tuesday evening was the Fifth Grade Essay Contest Banquet, sponsored by our Rotary Club.   All the fifth graders in the three school districts (Winthrop Harbor 1, Beach Park 3, and Zion 6) wrote essays on "the kindest person I know." Each of the 23 classrooms had a winner. Those children and their parents (with some grandparents and siblings), as well as their teachers,  were treated to a banquet held at New Tech High School.  Each child was introduced and congratulated by the superintendent of her or his district.  One winner from each district received an iPad.  It was wonderful to the expressions on all of the children's faces as they were honored.

Saturday evening we enjoyed Full Score Orchestra's Christmas Concert which included   Amahl and the Night Visitors . I remember watching it on TV when I was little. It's been such a delight to hear it again at Full Score's concert.

"Christmas Presents" was the title of the Christmas pageant presented at church this morning. It was truly the best Christmas pageant ever -- the children were wonderful and the message was meaningful. (We sat too far back for my pictures to be very good.) At the potluck afterward we had a birthday cake for Jesus.   ﻿﻿﻿﻿
This week's quilting time was devoted to Celtic Solstice.   I like to make HSTs by the round-up/cut-down method. I cut a lot of 3" orange and yellow squares, sliced them in half, made HSTs, trimmed, and pressed. I made 25 pinwheel units. Then I compared what I'd made to the units from Steps 1 and 2. Oops! The pinwheels were 4.5" because the HSTs were 2.5". Well, it's easy to make them smaller! Here are the re-sized Step 3 pinwheels and a few trimmed HSTs....more to come. 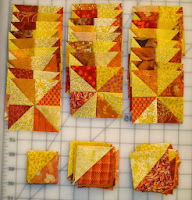 At this stage in a mystery it's tempting to see how the units will fit together. (And I see that one of those blue units is wrong way around. I am not going to take another picture this evening.) 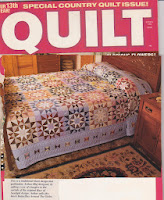 The Spring, 1992, issue of Quilt was on the guild giveaway table. I brought it home with a stack of others. This block has some of the units in Celtic Solstice, and the block name has some similarity....hmmmm! 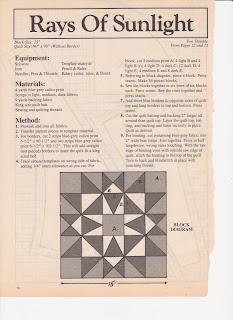 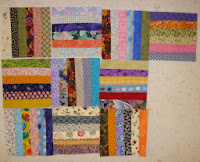 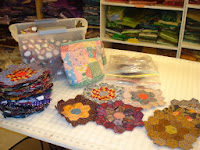 I got out the necktie hexagons:  my take-along handwork for our upcoming Road Scholar trip to Quebec. We leave on Friday!


I'm joining Quiltville fans for the Mystery Monday  linkup and with other quiltmakers this Design Wall Monday at Judy's Patchwork Times.
Posted by Nann at 10:21 PM

Wow! You are truly a "power quilter" with all the projects you have going.

Oh, I like the designs you came up with... and that block from the old magazine... I'm skipping this mystery. No time to sew and too many unfinished projects. And, one project being planned to start in January. Have a safe and fun trip. Any quilt stores planned on the trip?