A tour of tea towels

I was sorry to miss the Bumble Beans Tea Towel Challenge (because I didn't know about it). I was delighted when Sophie said she'd like to have a 2014 edition: this challenge 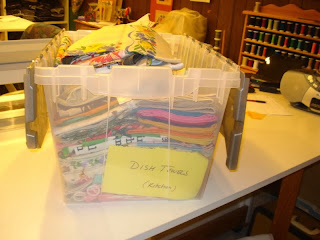 Though it won't begin until January -- and in the meantime I have Christmas gifts to sew, a commission quilt to begin and end, and other obligations in between -- I used Sophie's announcement as an excuse to pull out my box of vintage dish towels and try to make a choice for the challenge.    (I call them dish towels. She calls them tea towels.)

I have come to some conclusions about dish towels.  They are often purchased as souvenirs. They are often never used:  by the traveler or by the recipient. 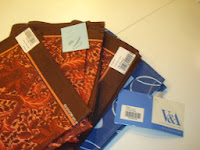 Salvation Army purchase:  .90 each.
Purchased at the V&A? Or at a U.S. museum store? 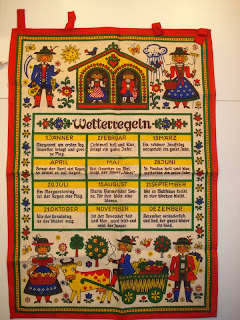 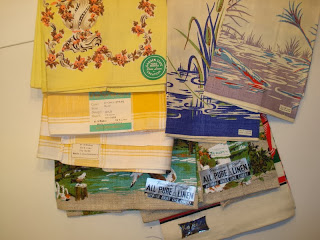 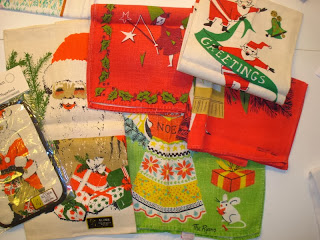 Christmas, including a never-used towel-and-potholder set. 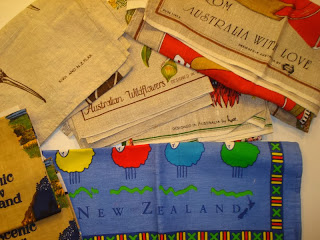 All of these from the Antipodes. 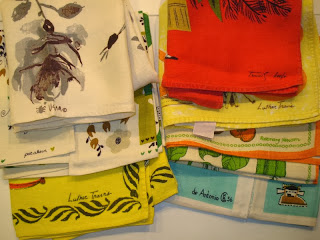 Signed by the designers.  Note upper right -- Tammis Keefe, one of my favorites.  You can read more about her here 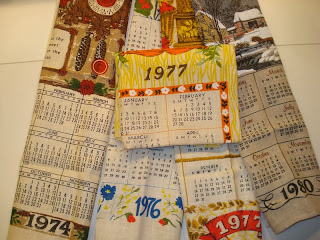 I'm not big on calendar towels -- these are all I have. I should look up when the first such towels were issued.

Update:  here's what Google found for me.
January 01, 2010|By TERRY KOVEL
Q: I have a small collection of calendar plates from the early 1900s. I've just come across some calendar towels and wonder if you know anything about their history.
A: Stevens Linen Associates of Dudley, Mass., which was founded in 1846, claims to have made the first calendar towels in 1954. The company is still at it and wholesales to various online and on-land stores across the country. Each towel has a picture and a full 12-month calendar. Colorful calendar towels from the 1950s through the '70s sell  for about $30 each.
Trust me, I paid nowhere near $30 for these. 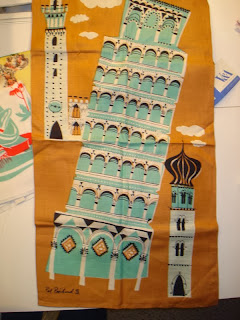 Leaning Tower -- another designer signature. (Pat Pritchard.  You can see her other work  here)
This is typical of the souvenir-scene towels in my collection. 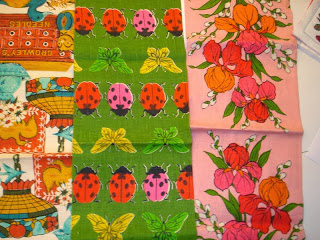 Two-way prints probably won't work for the design challenge. The one on the left features a thread spool box. 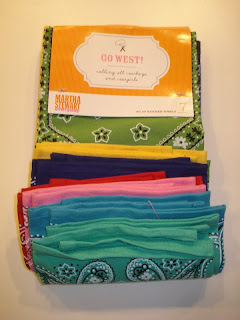 I bought these Martha Stewart bandanna-print towels new, at K-Mart. (Well, they were on clearance.) 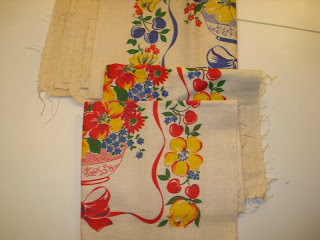 Old vintage towels:  these were cut from yardage but never hemmed.

This gem was a gift from my friend Celia.  It is a 10-yard bolt of Startex screen-printed toweling.  See the label?  No, I am NOT going to cut into this.  I am going to own it.
Startex is still around:  http://startexind.com/ 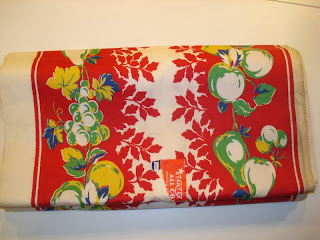 I have narrowed my choices for the Tea Towel Challenge to two.  But I'm not going to reveal them yet!
Posted by Nann at 10:04 AM

wow, nice collection. I have about 50 linen ones in my collection and I am going to cut them up. I have some that were well loved and others that were never used. can we make a deal on the calendar towels?

What an amazing collection. The Pisa souvenir is wonderful!

wow-you really have some gems! how are you ever going to decide!

Really nice selection of tea towels! Hmmm - methinks I need to go visit the local Salvation Army around here as well! Maybe Goodwill too! Never know what tea towels I might find!