DWM: another finish and swaps updated

Thursday evening we spent our wedding anniversary in the company of 70 strangers. That was our debut as Road Scholar Ambassadors.  We gave a presentation at the Del Webb Grand Dominion retirement community.  We tried to provide more information than "photos from our vacation," and the audience appeared to enjoy it. There were several in the group who had been on Road Scholar trips and their enthusiasm confirmed ours. 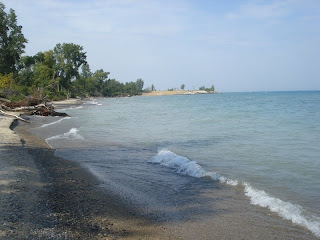 What's missing in this picture?   People!  There were only a half-dozen people at the beach on Friday afternoon. It was a beautiful day and the water was warm.  It was hotter on Saturday and I'm sure it was more crowded, but I stayed home.  Sunday afternoon it rained, which we need badly, and gave me an excuse to sew.
﻿
﻿ 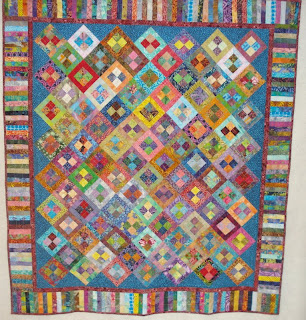 Batik 4 Patch is finished. I used the red circle batik for the inner border and the binding. The back is another example of finding a use for a possibly ugly fabric. This one came from a thrift store and was just right.  I used zig-zag stitches and variegated thread for all the quilting. 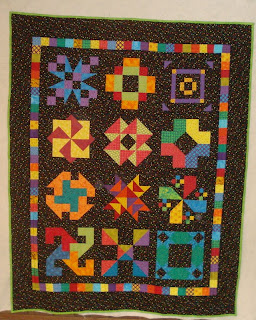 I turned to the box of flimsies for my next project.  This bright sampler was on top of the stack. It was a block of the month on RCTQ circa 2007.  I set the blocks a couple of years later.  I used four different bright fabrics for the back.  The quilting is all-over meandering.  This will be donated to a worthy cause (though I don't know what that will be). 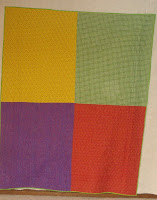 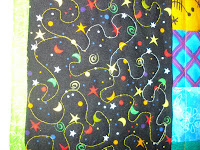 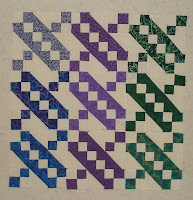 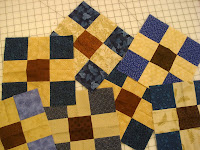 Sew Many Swaps is doing a D9P swap in blue, tan, and brown.  Participants are to send in the 9-patches and the recipients will cut them up. The color scheme grew on me as I cut and sewed six sets of six blocks.  The second photo shows what the D9P might look like. 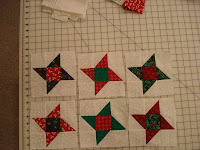 I'm coordinating two swaps for Block Swappers.  Both are Friendship Stars, one in homespun and one in Christmas reds and greens.  I finished three sets of homespuns and the sample Christmas blocks.  They're not due for another month.  It's nice to have a head start. 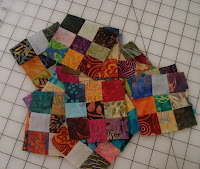 I'm using 1.5" batik squares as leaders-and-enders. I'm not sure where these little 9-patches will end up.


See what other quiltmakers are doing at Judy's Patchwork Times.
Posted by Nann at 9:51 PM 3 comments: 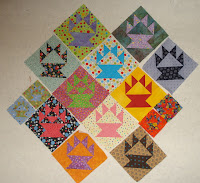 The  Bag Lady swap is nearly finished! I received a box from Carla with her blocks for Katie, Debs, and me.  Debs is making a beautiful floral applique block in batiks. She wrote that she wanted batik blocks to coordinate.  I made six 6" Rosebud blocks.  Katie plans a Churn Dash quilt in batiks.  She included an assortment of fabric and asked that we use our own fabrics but to include some of hers so there would be some continuity to the blocks. She added that Churn Dashes can be mildly addicting.  She was right! Once I decided which fabric to use, making these 9" blocks was a snap. (And I made three more 6" blocks that I didn't photograph.)  The dotty Cake Stands I specified are the seeds of a new project. 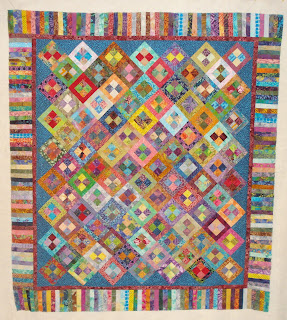 Batik Four Patch s rapidly becoming a Finished Object.  (I need a better name for it.)  I thank everyone for their opinions about the borders.  I cut the red-circle inner border 1.5", so 1" finished which is the same size as the frames for the 4-patches.  I cut the piano keys to 5.5"/5" fin. which is the same size as the framed blocks.  I have nearly finished quilting the center and should have the entire quilt finished at the end of the week.  As I posted a couple of years ago the quilts without deadlines or destinations come together easily.


See what other quiltmakers are doing at Judy's Patchwork Times.
Posted by Nann at 6:18 AM 13 comments: 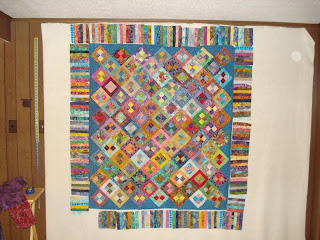 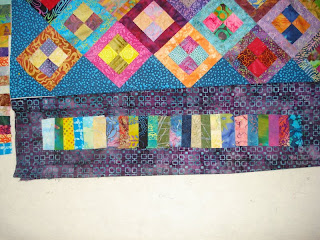 Unedited!
Here is the border-in-progress for the batik squares quilt.  The piano keys units are 1.5 x 6.5, sewn into 6.5" blocks. As you see I have almost enough for the border.

I think that piano keys this big overwhelm the center blocks.  I can cut them down, of course.

Would it be better if I cut the piano keys in half?  (Don't worry, they're just folded in these photos!)  I do NOT want to buy more fabric.  I have three batiks that could be used as frames.  Maybe.

What do you think? 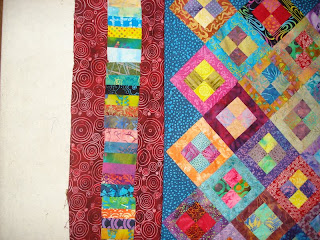 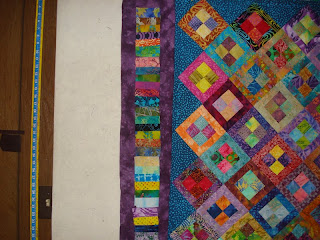 DWM: the allure of batiks 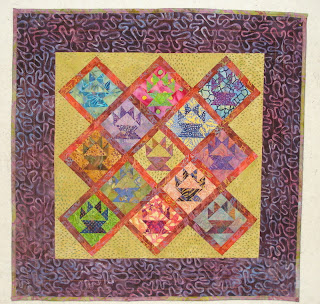 Last week I wrote that I needed to make two wallhangings. They're for the staff of a community agency that has concluded its ten-year grant funding. They've done a lot of good work and the agency board (on which I've served since 2003) will miss them. I began the design process by realizing that I have no idea what either woman's home decor is like. Batiks go with everything, and I have a lot of them in my stash.  The Cake Stand block is a  favorite (here, too).  The efficient way to cut the pieces provides enough for two blocks.  You can see the duplication between the two.  I quilted loopy flowers in the blocks, zig-zag in the sashing, meander in the setting triangles, and three parallel rows of zig-zag in the borders.   The cake stands are 4" (finished).  Each wallhanging is 33 x 33 and used 2.5 yards of fabric. 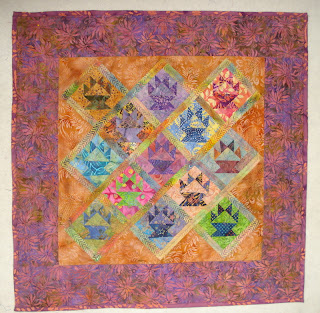 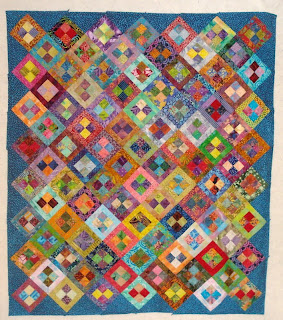 But wait! There's more!  I can't throw away batik scraps.  I have a sweater-size box full of pieces that are too small for the fat-quarter boxes....squares, triangles, half-square triangles, strips.   While I made the wallhangings I used 2" squares from that box as leaders-and-enders which I then sewed into four-patches.  I cut 1.5" strips (using many of the 6" and 6.5" squares in the sweater box), cut those into 3.5" and 5.5" strips, and framed the four-patches.  One block led to another, and here's the result.   The blocks are 5" (finished).   I was going to set them so the darker squares would all be going in the same direction, but keeping track of that was too bothersome. The mixed orientation looks livelier! I will add a pieced border -- piano keys, I think -- partly because I don't have enough of any one batik in the right color for a slab border.  As shown, this is approx. 56 x 51 and used 2-7/8 yards.
﻿

P.S. No evening meetings this week provided a lot of sewing time!

See what's on other design walls at  Judy's Patchwork Times.

I'm pleased to say that I have finished quilting both wedding quilts (as reported two weeks ago)!  Up next:  two wall hangings for the staff of a community agency with which I'm involved.  The presentation is in early September so I need to decide soon what I'll make.

﻿
The Baseball Swap  began nearly 15 years ago on the Usenet Newsgroup Rec.Crafts.Textiles.Quilting. It's been a YahooGroup since 1999.  Participants swap 6.5" squares of fabric based on the results of Major League Baseball games. Each person can choose a National League and an American League team (or just one). The backers of the losing teams owe the backers of the winning teams. One person keeps track of wins and losses and provides reports after the All-Star break and at the end of the season. Squares are bagged and sent to the BUPchucker--that's "big ungainly package" who swaps everything out.
﻿﻿﻿
I back the Cubs and the Red Sox, neither of whom is having a good season. For the first half of the season I'll get 62 for the Cubs but I'll give up 83. I'll get 67 for the Red Sox, but I'll give up 59.  ﻿﻿(Actually I give up more because I send 10 squares to everyone. It's easier to count that way and goodness knows I have enough fabric.)
The squares are a great assortment. They come in handy when I need just a little of one color or pattern or another.  ﻿﻿﻿﻿
I cut squares during the year when I'm in a scrap-cutting mood, so I'm ready to go when the reports arrive, which they did this weekend.

We went to a wedding shower on Friday (for the recipients of the batik nine-patch quilt).  The bride is from Maine, the groom is from Wisconsin, so we gave them something that no one else would have thought of:  Moxie!   I ordered a six-pack and two Moxie-logo tumblers from BuyMoxie.com  and two 12-packs (one regular, one diet) as our contribution to the party fare.  Moxie is definitely an acquired taste, and fortunately the bride said, "I love Moxie!"  Now she can convert her groom.  (It costs a lot to ship flavored water halfway across the country, so we will savor the remainder of the 12-packs.)

If you've never heard of Moxie, you can learn more about it here.

See what other quiltmakers are working on while they watch the Olympics, courtesy of Judy's Patchwork Times.