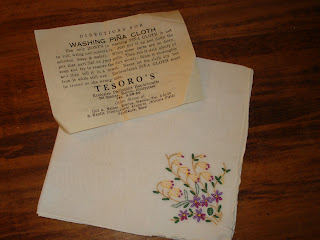 An AAUW friend moved to a nursing home earlier this year.  Bunny lived in a big, late 19th-century Italianate house on the north side of Waukegan for years.  She was a nurse who served in the Navy (Korean War, I think). She was also a pilot.  She had accumulated so much stuff that the estate sale was held for two weekends.

Among the things I bought was this never-used hankie.  Tucked in side were these care instructions.  Pina cloth is made from pineapple fiber
﻿﻿﻿ 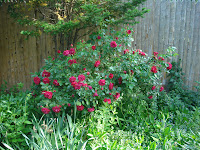 We have two rose bushes.
The one in the front had hybrid flowers until DH trimmed it so aggressively that he cut below the graft --now it's "natural." The one in the back yard is a rambler that, if not trimmed, will shoot out long stems.
Our U.S. flag was a wedding gift. It flew over the U.S. Capitol. (Here's how to get one: http://www.capitolflags.gov/) A couple of years ago I heard an NPR story about the guys whose job it is to hoist flags up and down over the Capitol all day. ﻿﻿ 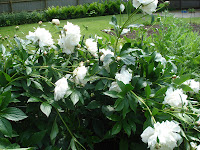 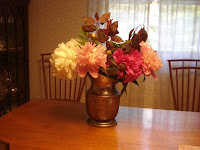 The peonies
are
grand
this year!! 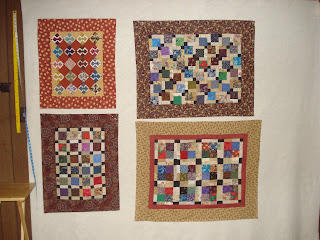 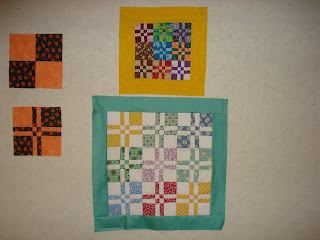 At the NLCQG  meeting next month I'll give a demonstration on "disappearing" blocks.  Here are my samples for disappearing 9-patch and disappearing 4-patch.  D9P designs abound, and after I finished these samples I got a message that the Block Swappers   are doing a "double D9P" swap.   I don't know if I'll have time to work up a sample of that one.


See what other quiltmakers are doing this holiday weekend at ﻿﻿﻿﻿Judy's Patchwork Times
Posted by Nann at 8:40 AM 10 comments:

We got vegetable sets and seeds this weekend. The seeds are planted and the sets are hardening off. We've learned that there is usually a cold snap just before Memorial Day and it's best to wait to plant that weekend.

Neither one of us planted this iris. It just appeared this year! 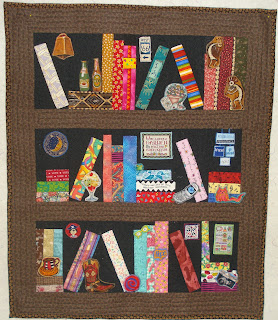 I wrote earlier this month that I had two quilts that I had to make. I finished one of them last week (see the DWM post).  Here is the second.  It's for Karen Schneider, who stepped down last year as co-moderator of PubLib, the public librarians' listserv. I volunteered to make the quilt as a thank-you and finally it's finished!  I will present it to her at the ALA Annual Conference next month. 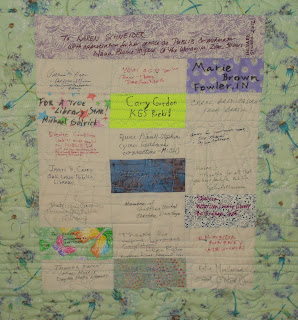 The back uses a dandelion print that I've had for at least five years.  Dandelions are a symbol of PubLib, for reasons that I have forgotten.  Some of the more than 10,000 PubLib subscribers contributed signature squares that I pieced into the back.

See what other quiltmakers are working on at
Judy's Patchwork Times.

An evening with Bonnie 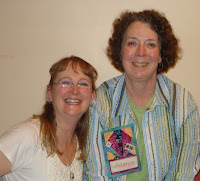 Bonnie Hunter is in Illinois this week!  She spoke at the Village Quilters meeting in Lake Bluff last evening.  That's not my guild but I happily paid the guest fee to attend. (As it turned out, I knew at least a dozen of the women there:  from AAUW, P.E.O., and libraries, as well as quilting.) 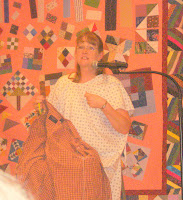 Bonnie was great!  She's a good speaker, adding good humor in her presentation.  She showed us how she dissects a shirt to get the maximum usable fabric. She did it in six minutes with dull scissors.  (She assured us that she'd cut faster with sharp ones.) 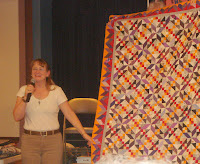 She showed many of her quilts. "Night Flight" is a new design and we were the first to see it. Her travel handwork is a hexagon project she's been working on for years.  She's nearly done...with the piecing. Quilting to come. 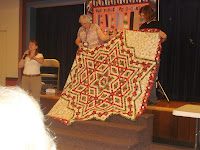 DWM: Bag Lady Swap for May, and progress

My big accomplishment this week was to clean the bookshelves in the living room. It had been years since I had taken the books off and moved the bookcases to vacuum and dust. In the process I culled two boxes of books that I haven't gotten around to reading or won't read again.  I'll take some books to the library sale and others to the silent auction at the AAUW luncheon next month. 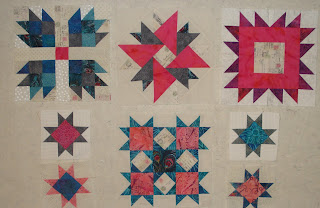 Here is the May installment of the Bag Lady swap.  Lynne's starter block is the dahlia, top row center.  Her focus fabrics are a pale print that has old-fashioned postcards and a peacock-feather print.  Carla's and Janet's blocks are on either side.  I made the Corner Star in the lower row and four 6" Ohio Stars.

I mentioned two projects that I had to work on. Once I finished Diamond Stamps (see previous post) I tackled them. 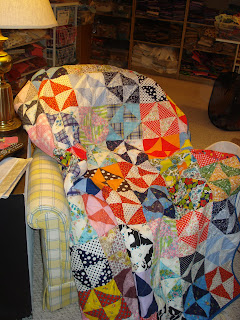 Several weeks ago a co-worker's mother asked if I could finish a comforter. I said I'd be glad to take a look at it. Her 85-year-old father made the Broken Dishes blocks and assembled them. He started to make them into a comforter -- with batting and a bedsheet for backing -- but wasn't able to finish the project.   The bedsheet wasn't large enough; it wasn't basted; the edges were pinned with straight pins.  I took the sheet and batting off and pressed the top well.  I had 6 yards of an aqua leaf print, just right for the backing.  I used new batting, layered, basted, and quilted with diagonal lines.  The variety of fabrics in the blocks is so cheerful! They're not all quilting cottons -- some shirtings, a couple of piques, and probably some polyester.  It's 72 x 86.

The second "deadline" project is well underway....I hope to be able to post a finished photo next week.

See what other quiltmakers are working on at Judy's Patchwork Times. 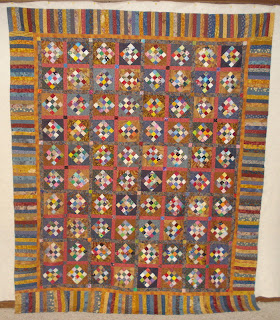 This looks very cozy-fall. That's just how it turned out. And now I *have* to get to work on the projects that have definite deadlines, which were sidetracked by this one. 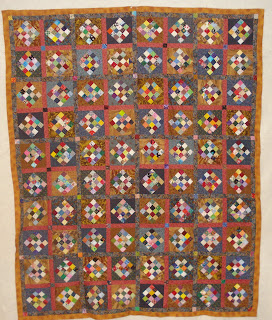 I have two quilts I *have* to work on. Rather than getting started on them I came across a couple of experimental blocks:  16-patch blocks with triangle corners (sort of "squares in a square").  The 16-patches are made from 1.5" postage stamp squares and I had a big stack of them on hand.  I added triangles until I had 81 blocks, but ended up using 80.  Each block is 6" *unfinished* (5.5" finished) -- the unusual measurement is because of the on-point 16-patch.

Lately I've been intrigued by low-contrast designs, inpired by Kaffe Fassett whose quilts have simple shapes and coordinated, busy fabrics.  That was the effect I wanted for this quilt.  I used several different dark golds and several different dark blues for the triangles. The primary sashing is a soft red and the secondary sashing is a blue/gold print. The cornerstones are scrappy.  I will add an outer border but so far I haven't found anything in my stash that will work (and that I have in sufficient yardage).  Maybe I'll try a pieced border. Hmmm.....

Take a look at what other quiltmakers are working on at Judy's Patchwork Times this Monday.
Posted by Nann at 6:20 AM 12 comments: