The third session of ALA Council ended early on Tuesday which gave me time for a tour of the Sixth Floor Museum, the former Texas School Book Depository from which John Kennedy was shot.  I noticed that people reacted differently. Those my age viewed the exhibits remember where they were when they got the news. The teens on field trips were seeing 'ancient' history. 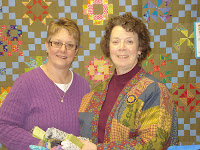 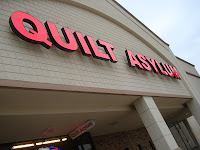 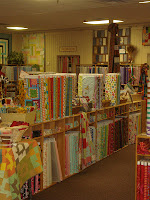 That afternoon: another trip on DART (just $1.75 each way, anywhere in the system!) to the end of the red line.  Paula, whom I've known since our freshman year in college, met me at the Parker Road station.  We last saw one another in 1989.   She obligingly took me to Quilt Asylum, which is owned by Susan (one of the Mapgies). I last saw Susan in 1999.  QA was the best shop of the three I went to on this trip.  Lots and lots of fabulous fabric, displayed with bolts on top and bottom shelves and FQs from those bolts on shallow shelves in between.   Paula then took me on a tour of Allen, which had 4000 people when she moved there in the early 1980's and now has 82000.  She's actively involved with the
Allen Heritage Village -- the link shows the dedication of the restored Allen Christian Church with its stained glass six-toed Jesus.  (And though I didn't get a photo of Paula and me, she's in the video.) 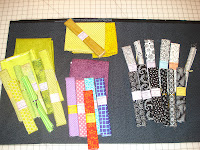 Here are my total Dallas fabric purchases:  11-1/2 yards, $102.  Lime green, black & white, some purple, some bright, and some 19thc reproduction yellows.  All of these are settling comfortably in my stash. 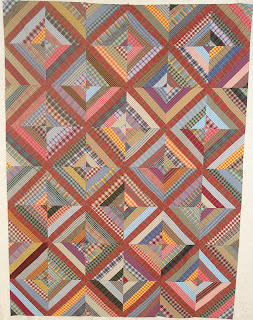 And, finally, to
Design Wall Monday !  The 2012 HeartStrings challenge begins February 1.  I jumped the gun and pieced this 48-block flimsy yesterday.  All the strings are homespun or yarn-dyed plaids, 2" wide.  The blocks are pieced on fabric foundations.  Counting the foundations, this used 8 yards of stash.
Posted by Nann at 8:11 AM

I love the heartstrings blocks. They look good no matter what color center you have.

Boy, I have to really keep my machine humming to keep up with you! Your heartstrings look great!

Oh I love the fabrics you picked up! I think I see a few that are already resting comfortably in my stash too!

Thanks for showing the homespuns in the strings, they look grand with the red as the anchor color! No where did I see you mention what sized blocks they are; I use a 10" muslin square. Do you too? Thanks!

Love the string quilt! I have a fondness for plaid - and polka dots! Looks like you had some fun shopping too - pretty choices.

that string quilt is a beauty!!

I love it! You jumped the gun and its gorgeous!!

I like your heartstrings in homespuns... need to paw through my trash can and grab back a couple of thinner pieces I just threw away.

Strings in plaids - never thought of that & it looks just great!