The journey of a quilt

A colleague (director of a library in a southwest suburb and a fellow Rotarian) wrote me yesterday: "Were your ears burning this morning? A picture of one of your quilts for Alliance for Smiles was shown during a presentation at today’s Rotary meeting. The presenter read the label off the screen, and it was yours! I told the group that I knew you, and impressed the heck out of ‘em! Guess you’re world-famous now!"

The funny thing is that I did not give the quilt to this project! I e-mailed the presenter, a Rotarian from Oswego, IL, and he sent me the photo that my friend commented on. Obviously it is a quilt that I made. I donated it to the Rotary Club of Boothbay Harbor, ME, which was collecting quilts for Safe Passage (http://www.safepassage.org/) a couple of years ago. The Boothbay club coordinator told me that my quilt was not going directly to Guatemala but would be sold (or raffled) stateside as part of a fundraiser. Evidently it ended up with Alliance for Smiles -- keeping it in the Rotary family.

BTW, the project is: http://www.allianceforsmiles.org/ "Alliance for Smiles (AfS) was founded in October of 2004 by five members of the Rotary Club of San Francisco who had been involved for ten years previously with cleft lip and palate reconstructive surgery. The desire on the part of the Founders was to create a two tiered program that not only send medical teams to sites to perform free reconstructive surgery but to also create Treatment Centers where the protocol of cleft treatment found in Center in the United States could be replicated. "

(P.S. My personal random access memory recalled that Cleft Palate Research was one of Alpha Gamma Delta's mid-20th century philanthropies (then called 'altruistic projects'), so there's another connection, albeit peripheral.)
Posted by Nann at 4:02 PM No comments:

ALA Report, Part I

This was definitely the best tote bag at this year's ALA conference! I got mine at a program called "Love Is in the Air." Four romance writers spoke: Laura Caldwell, Cathie Linz, Eloisa James, and Debbie Macomber. Before the program Debbie was the only one with whom I was familiar. It's interested to know about writers' other lives. Caldwell is a professor at Loyola University School of Law. Linz is a former special librarian. James is a college professor whose expertise is Elizabethan theatre. (And she is the daughter of Robert and Carol Bly, the poet and short-story writer.) Macomber is a full-time novelist.

Linz gave a funny "day in the life of a romance writer," which included: "Check status of my books in WorldCat Local. Ah! They are in libraries from Abilene, Texas, to Zion, Illinois." I let out a shriek at that!
Posted by Nann at 6:39 PM No comments: 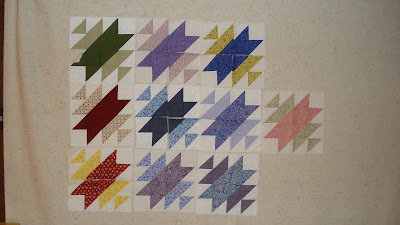 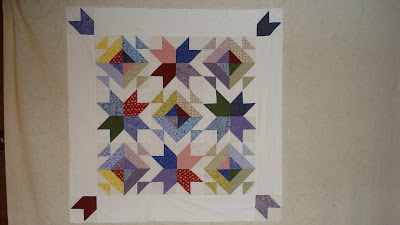 I made a list of five things to accomplish in my studio this weekend. As of last evening I finished them all!
* Label and attach hanging sleeves to my contributions to the Chicago-area librarian/quilters exhibit that starts at Northeastern Illinois University later this month (and will be at my library after that)
* Make the guild block-of-the-month (due at the August meeting)
* Make more hexagons for the ongoing English paper piecing (see last blogpost)
* Finish quilting the strippy scrap quilt I began earlier in June (all I had to quilt were the borders, then bind it; the flimsy was created a couple of years ago)
And
* Finish the BOB!
Word of explanation: the Sew Many Swaps group has an annual Bag of Blocks (BOB) swap. Participants send the hostess a bag of quilt blocks that they haven't gotten around to setting; the hostess swaps them out for someone else's bag of blocks. The challenge is to figure out a way to set the blocks and add a border or two. I got L's blocks: 10 of them. I couldn't arrange them in a way that pleased me, so I asked L if I could disassemble them. She said yes. The photos show the before and after.
Posted by Nann at 12:45 PM 5 comments: