Style from the Stacks 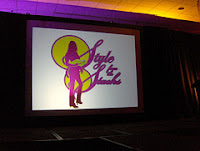 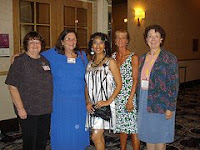 ZBPL design team: Henny, who crocheted; Rosemary, who chauffeured; Sarah, who modeled; Jean, who designed and stitched; and me, who networked.
"Style from the Stacks" premiered at the Illinois Library Association annual conference last week. The 40+ entries were made from library "stuff." Sara was our library's model. Her silvery shantung dress is embellished with videotape and ribbon (to simulate a barcode), with fussy-cut library cards (with the library's initials) that are themselves embellished with rhinestones. Her earrings are also rhinestone-adorned library cards. Her purse and the rosettes on her shoes and headband are crocheted from videotape. An award-winning local manicurist created press-on nails featuring audiotape and cut-out words, and another local styliest donated the hairdo. (Thank you, Chelli and Krissy!)

Other entries included a necktie embellished with coins from that library's fountain; a cocktail dress made from microfilm (with microfilm-trimmed shoes); two versions of Book Jackets; a vest made from CDs (like chain mail!); a scarf knit from newspaper bags; and a wedding dress made from romance novels.
Sheree took great photos. Here's the link to her Flickr stream:
www.flickr.com/photos/sheree11/sets/72157607525433065

It was a great evening and there is already talk of "next year"!
Posted by Nann at 5:18 PM No comments:

"Day of Discovery" in Chicago 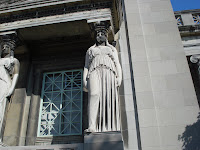 Last Thursday DH and I enjoyed a one-day Elderhostel program in Chicago. "The Devil in the White City Tour" was named for the book by Erik Larson that contrasted the glorious "White City" of the Columbian Exhibition of 1893, the economic boosterism and rivalries of the fair's planners (among them Daniel Burnham, Frederick Law Olmstead, and Mrs. Potter Palmer), and the sordid, horrific H. H. Holmes who ran a boardinghouse into which young women went, and did not return.
Our tour was coordinated by the Museum of Science and Industry, where the group (there were about 40) gathered. We saw a computer simulation of the fairgrounds, which included reclaimed shoreline and the broad strip called the Midway Plaisance. At the time the area was "suburban" -- Hyde Park was 7 miles south of the Loop. The fair was a "White City" because most of the buildings were constructed of "staff," a mixture of plaster and cement on burlap, painted white. None of the structures was intended to last for more than the six-month season of the fair. Much has been written about the fair itself, and you can look it up

What interested me: how MSI can be an original fair building when everything was temporary. The answer: MSI, the Fine Arts building, had a masonry core and bronze fire doors to make it fireproof. Parts of the exterior were made of stone.....It operated as the Columbian Field Museum for 30 years, until the Stanley Field Museum of Natural History opened. Julius Rosenwald, the Sears & Roebuck magnate and Chicago philanthropist, gave $2m in cash and Sears stock to create a science museum. He did not want it named after him, partly to encourage others to give, and also because of anti-Semitism, though for a while it was called the Rosenwald Industrial Museum. It became the MSI in 1933. Generations of Chicago kids (myself among them) remember the submarine, the coal mine, the larger-than-life-sized heart, the "pickled babies" (fetal development)....but I digress.

Our MSI tour included a walk on the grounds. The photo here is of two of the 7-foot-tall karyatids, a classical architectural feature (and another memory from those childhood field trips).

We then got on a coach bus and headed north to Lawry's The Prime Rib restaurant. I've walked past it often en route to ALA headquarters, but had never gone inside. It's the Leander McCormick mansion, built in 1894, said to be haunted by Mrs. McC. It was a casino and speakeasy in the 30's; then Kungsholm marionnette opera theatre, and became Lawry's in 1976. Our lunch replicated the Great Midway Ball Luncheon of 1893, as described in Larson's book: hash, beef stew soup, chicken fricasees with mashed potatoes, and raspberry sorbet....imagine having such hearty fare routinely! It was delicious.

Joining us at lunch was a guide from the Chicago Architecture Foundation (http://www.architecture.org/)
He provided us with more information about fin de siecle Chicago. We took the bus to Prairie Avenue, where the wealthiest people in the city lived--the Fields, the Armours, and others. (http://www.cityofchicago.org/Landmarks/P/PrairieAveDistrict.html) With the recent redevelopment of the South Loop, Prairie Avenue is once again an attractive place to live. The Marshall Field, Jr., mansion has been divided into condominiums. Which one has the parlor in which Field died? That story is one of the tales in "Sin in the Second City," http://www.sininthesecondcity.com/, just blocks from Prairie Avenue (but not on our tour).

Finally, back to MSI for a walk to the Japanese Garden on Northerly Island in Jackson Park. It, too, is a remnant of the Fair. (http://www.hydepark.org/parks/osaka2.htm#history) Our group was large and it had already been a long day, so we couldn't really enjoy the serenity of the garden.

It was a most enjoyable way to spend a beautiful September day! This was our fifth EH "Day of Discovery" and we look forward to future Discoveries!
Posted by Nann at 5:57 AM 2 comments: 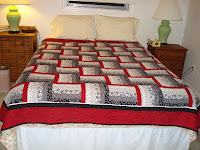 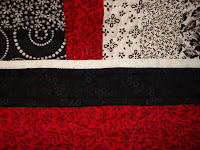 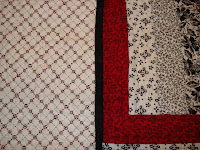 I have acquired a nice collection of black-and-white fabrics. I began this quilt Labor Day weekend and finished it -- quilted and bound -- this evening!! (I took advantage of three free evenings this past week.) Though most of my quilts use many more different fabrics, this design would not be as effective with more than the six that it has. The backing is red/white/black print that I bought in tremendous quantity in the Red Tag section of JoAnn's a couple of years ago. (Can't beat good quality when it's just $1/yard!) My Magpie friends provided advice for the border which is a flap of white-on-white, then black-on-black, and the wider red. The finished size is 89 x89. I don't know its destination.
Posted by Nann at 7:27 PM 8 comments: