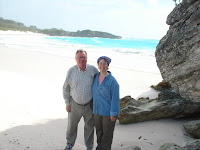 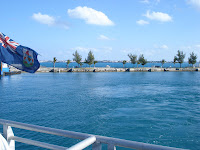 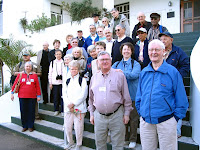 Photos:
(1) At Horseshoe Bay
(2) From the ferry (Hamilton to Dockside)--the water really is that color!
(3) The group on the steps to the residence hall at BIOS.

We had a splendid time at the Elderhostel at the Bermuda Institute of Ocean Sciences. We left two weeks ago (2/10) and returned last Monday (2/18). That gave us a day before and a day after the Elderhostel itself.

The theme was "The Real Bermuda." We learned the history and ecology of this 21.5-sq-mi island nation, which never had indigenous people. Europeans discovered it in 1505 (Spanish) and the English colonized it in 1609. Over the centuries its native cedar was known as a superior wood for furniture and shipbuilding. Its gardens provided produce for 19th/early 20th-century New York (Bermuda onions). Tourism began in 1883 when Princess Louise wintered in BDA. Now the major industries are tourism and being headquarters for many reinsurance companies.
BIOS was established in 1903 by Harvard oceanographers. It hosts the longest-running ocean water quality project, used as a benchmark by oceanographers worldwide. The BIOS research vessel was in port so we got a tour. We also went out on a smaller craft, with one of the BIOS scientists, to collect plankton which we viewed under microscopes. (http://www.bios.edu/)

We learned about the Bermuda petrel, or cahow, which was nearly extinct. Ornithologist Dr. David Wingate who led the preservation effort still monitors the preserve where they nest. He gave a presentation for us. (www.audubon.bm/bird%20conservation.htm)

We were there in the "low" or off-season so shops had reduced hours and there were no cruise ships in any of the ports. Yet it was in the high 60's each day, even the day that that a gale came through with rain and very high winds. (The day we were at Dockside, the historical museum complex.)

Bermudian architecture, both residential and commercial, requires that roofs are made to catch rainwater. Houses have underground tanks to store the water, which is used for drinking, etc. (Toilets are flushed with saltwater.)

Our cohort of 27 had the mix of interesting people we've come to expect and enjoy when we travel with Elderhostel. It was a grand trip!

P.S. I found a place to buy fabric--the crafts dept. at Gibbons Department store had about 100 bolts (all U.S. manufacturers). I bought four different fabrics, total four metres, of the most "island" looking prints.
Posted by Nann at 7:32 AM 1 comment: 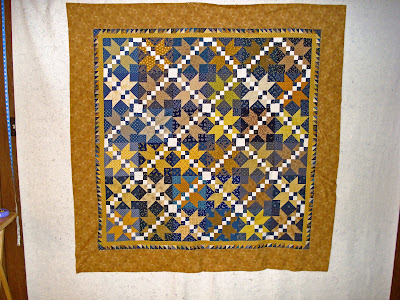 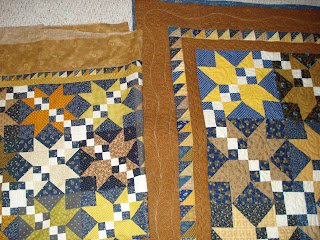 Little Dipper has 8" Drinking Gourd blocks. The big Drinking Gourd has 12" blocks. I used the same setting with the cutaway triangles creating the inner border. They are 1" (fin.) in the smaller version. I got the outer border fabric in Philadelphia. (That fits into the whole theme of these two quilts: the Drinking Gourd is another name for the Big Dipper, which guided slaves who were escaping via the Underground Railroad. The quilts are in CW reproduction fabrics. PHL, with its large Quaker population, was a major center for abolitionists.)

Caron at the Valley Quilting Studio did a fabulous job quilting the Drinking Gourd. I put the binding on this weekend.

Here is a comparison photo of the two.
Posted by Nann at 6:49 AM 4 comments: 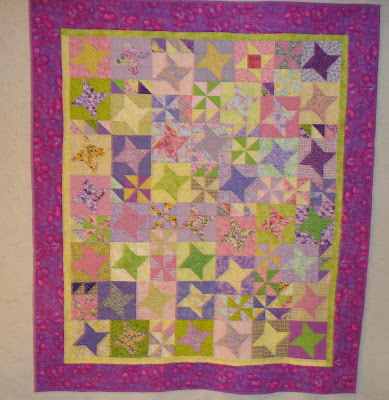 I finished quilting and binding "Ava's Stars" this evening (while NOT watching the Super Bowl). Ava will be 3 at the end of March so this is two months early! Her grandmother is my college friend Alex. I've done needlework for Alex's three children (back in my needlepointing days) and quilts for her grandchildren. The quilt is 51 x 59. The pattern was in the 4/99 issue of McCall's Quilting.

Crossroads with borders and Bargello 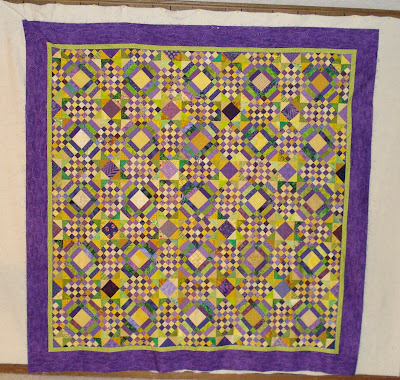 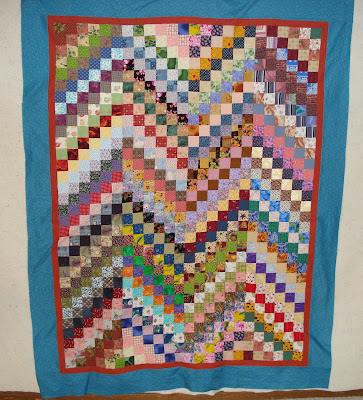 When it came time to put the borders on Carolina Crossroads I found that I had only one purple fabric that looked right and I didn't have enough of it. I did not have the creative energy to come up with something clever so I bought another "perfect" purple. Glad to have this one to the "flimsy" (unquilted top) stage!

I had to join the gang for Bonnie's Superbowl Bargello project. The 2.5 strips from the BlockSwappers' exchange came in handy. I pieced most of it last night and put the borders on after church and before lunch.


In preparation for our Elderhostel trip next week I bought a new digital camera. It replaces the Kodak EasyShare that dates back to 2002 ( all of 2 megapixels and no zoom). The new one is a Sony, same model as the ones we use at the library. I used it to take these pictures. (My challenge now is retrieving them. My desktop computer is too old for the software so I'm using the new laptop, which I'm still getting used to.)