Weekly update: the garden, a new flimsy, and reading 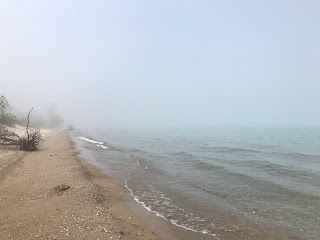 Illinois officially opened up on Friday with fewer Covid restrictions in place.  My P.E.O. chapter met for lunch on Saturday (we brought our own) -- the first in-person gathering since August.  Church services on Sunday were mask-optional.  There were twice as many people as we've had over the spring.  A light fog over the lake on Thursday was not a harbinger of rain, unfortunately.  We are in a moderate-to-severe drought.  On Saturday we saw the clouds that brought 1" to the suburbs just south of us but not a drop fell here. 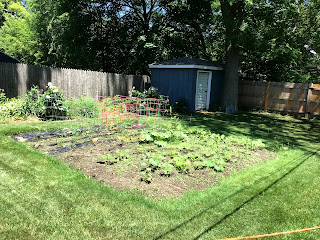 I have been watering the vegetable garden and the recent plantings (three lilacs in the back yard and a maple in the front yard, all of which replaced spruce trees that had to be taken down).  Our village gets water from Lake Michigan, so we don't have to worry about a well going dry the way that people just a few miles west do. 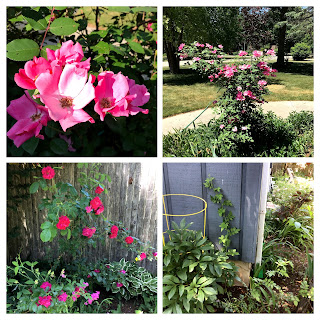 We have three roses that were here when we moved in (2003).  I've tried to plant others but they haven't succeeded. These three are hardy.  One doesn't bloom every year.  The pink one used to have fancy pink blossoms but at one point it was overzealously pruned to below the graft.  Now it's more of a generic rugosa.  (The closeup is of the rugosa.) 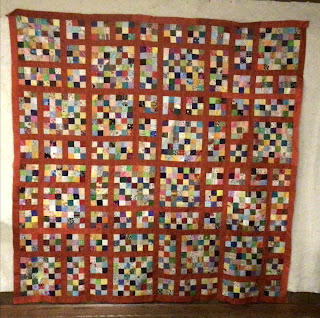 A long time ago I printed the tutorial for Growing Up Odd.  I came across it earlier this year and pulled out the shoebox of 2" squares.   Over several months I pieced  and pieced and pieced until I had 800 three-patches.  (That's 2400 squares.) I had to augment the contents of the shoebox by cutting 2" strips into squares.  I pieced those into nine-patches, 21-patches (seven rows of three) and 49-patches (two sets of seven rows of three plus a strip of seven squares). 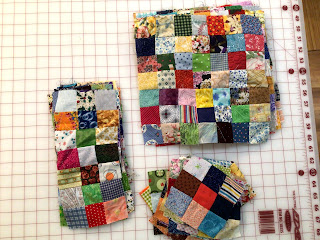 The quilt as patterned is 90 x 90 which would make a very large donation quilt (which is its probable destination).

I have the fixin's to make 9 more blocks for a smaller quilter -- or the ingredients for something completely different. 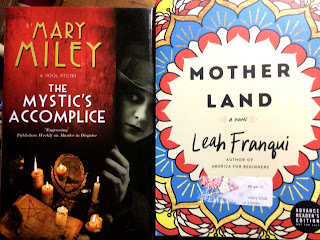 The Mystic's Accomplice
1924, Chicago.  Maddie Pastore is eight-and-a-half months pregnant when her husband Tommy is killed by a rival Chicago gang. She finds out that he never divorced his first wife so she is left homeless and penniless. She seeks advice and shelter at Hull-House, the renowned settlement agency founded by Jane Addams. After baby Tommy is born she meets a former neighbor who is going into business as a medium to help clients communicate with their dead relatives. Maddie goes to work for Madam Carlotta as a background-checker, digging up details about the clients to make Carlotta's "spirit connections" seem more realistic. When Maddie discovers that one client's husband may have been murdered she is determined to find out the truth, even if she has to ask a favor from Tommy's boss in The Outfit.

Snappy dialog, a plucky heroine, and historical accuracy add up to a satisfying first entry in a new series.  (And I must add that I've known Mary Miley since we were in fifth grade. This is the fourth mystery she's written.)

Getting married requires adjustments. Rachel Meyer considers herself up to the task and ready for the adventure when she and her Indian husband Dhruv move from Brooklyn to Mumbai. What a glorious city for a food writer to be! Soon after they settle in to their apartment Dhruv's mother Swati arrives from Kolkata, clear across the country. She's decided to leave her husband Vinod (Dhruv's father). Vinod hasn't been abusive; he's just been blind to Swati as a person with interests and opinions of her own. Despite her daring, very untraditional act, Swati fully expects to impose traditional order on Rachel and Dhruv's household. She hires a maid (Rachel can clean). She hires a cook (Rachel IS a cook). Dhruv takes on a long-term assignment back home in Kolkata leaving Rachel and Swati to work things out.

The story alternates between Rachel and Swati. Rachel finds a job dubbing a Romanian-produced soap opera into English, getting out of the apartment and earning her own money. Swati deals with her Kolkata friends who are appalled at her action and contemplates what she's going to do with the rest of her life.Rachel's view of Mumbai and Indian culture change. "Everything she knew about the country had been cultivated by watching Indian Summers and reading New York Times articles that distributed pats on the head and admonishments in equal supply....she had thought of India from a singularly white perspective....How could she separate what she thought from how she experienced it?" (p. 188.) "The city's normal was her strange, but her mistake had been in seeing it as *wrong,* not different. She had been seeing everything the wrong way round, she knew...She wanted life to be different but she hadn't defined what different meant."This odd couple come to terms with their choices and, as the book ends, are about to embark on totally difference courses than they intended.

Oh boy your scrappy quilt is fabulous!! A whole lot of scraps and a ton of thread make it so fun to look at.

The scrappy quilt turned out beautifully - and wow!! So many small pieces require a lot of patience.

A true scrappy delight! And more pieces to play with!

Super scrappy goodness, Nann!! Though I've never made one of her quilts, I'm a big fan of Wedding Dress Blue. I did start one, but haven't finished it!

Congratulation on getting so many 2" squares out of your stash. Wow ... and you had to cut into strips too. Excellent! Interesting books... esp. the one set in India. I've read a few books recently by Indian authors but I suspect their first generation Indians. But it certainly gives a whole different viewpoint. I suspect I'll put Mary's book on my list to eventually read.

Love your scrappy quilt. I ammaming a postage stamp of 1.5 squares.love thd woven look of it but nervous about quilting it

great idea for those 2" blocks...thanks for the inspiration! and the book reviews...just finished grisham's "time for mercy"...now reading "thursday murder club"....amazing how much time not driving (yet) leaves me with....lol

You always have some interesting work between quilting, clubs, hiking, and reading. Using random squares and and syncopated sashing makes a good quilt.

another great scrappy quilt and stash buster - thanks

such an amazing scrappy quilt!!! I am so impressed at how you work with small peices!

Great quilt!! Both these books sound perfect for me. I am adding them to my list. Thank you!