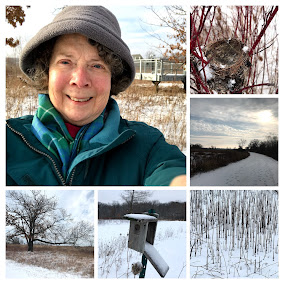 Our first forest preserve outings of the year -- Spring Bluff on Saturday and Van Patten Woods on Sunday.

Enough people had walked along the trails to pack down the snow so I didn't flounder. 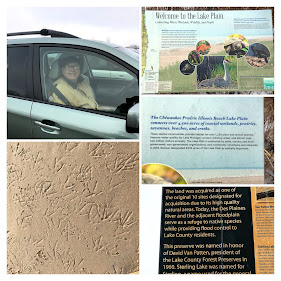 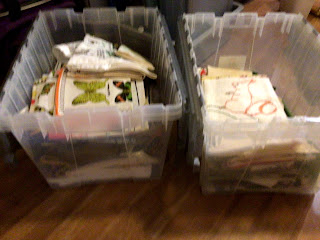 I've collected/accumulated household textiles for many years. In 2019 I sold nearly all of the aprons in a yard sale. In 2020 I cut up vintage tablecloths to make tote bags (see them here).   This year I'm assessing the dish towels.  I will keep those signed by designers (Tammis Keefe, Lois Lang) and others that have artistic potential (some day) but I am going to deploy others as actual everyday dishtowels.  Those they replace will become rags. 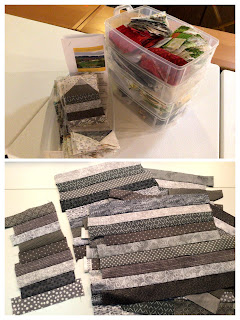 Here's Clue 6 of the Grassy Creek mystery.  I sewed 1.5" strips together without foundation papers and thus I didn't have to pick out all that paper. 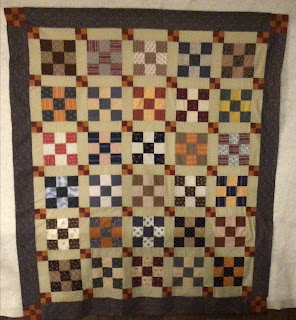 I made two CW reproduction flimsies.  The nine-patch is adapted from a pattern by Connie Etherington and Mary Tesene. 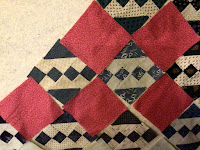 The  Jewel Box blocks just kind of happened.  I tried a variety of colors but blue and white won out.   I considered light chain or dark chain, triangles in or out. I considered a straight setting with or without sashing and a ring-shaped setting.  Then I put them on point. What a difference!  I tried pink for the setting squares but the one print I had enough of was way too intense.  I searched further and found a homespun check for the setting squares and a non-repro stripe for the setting triangles.  The outer border is a mid-1990's repro (Smithsonian Little Sister Quilt by RJR). 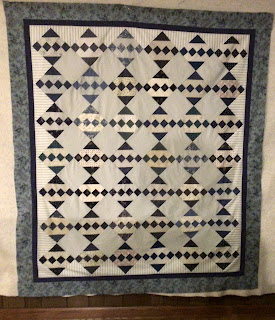 This brings this chapter of the great CW Repro Stash Reduction Project to a close.  I used up just shy of 50 yards on the 12 flimsies. Don't worry!  There are more to come. 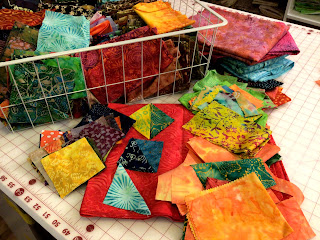 But now it's time to declare my January One Monthly Goal.  I signed up for the Modern Quilt Guild mini-swap.  I've corresponded with my assigned partner who told me she likes bright batiks.  I have a few baskets of those.  I've switched gears from CW traditional blocks to modern designs.  I have an idea and I even managed to chart it out on EQ8.
Here's the initial fabric pull. 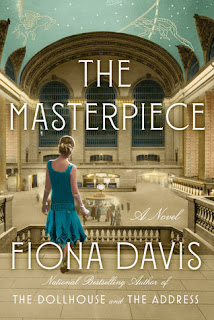 Fiona Davis writes novels about New York -- specifically, about iconic New York buildings.  The Masterpiece (2018) is about Grand Central Terminal (the technical name, as the reader learns early on). The story is set in the late 1920's when the Grand Central School of Art operated on the upper floors, and in 1974 when Grand Central was dilapidated, dangerous (muggers, etc.), and threatened with destruction.  Who was the pseudonymous artist whose work is discovered in the abandoned classroom? Why is it purloined before it can be authenticated?   There's a mix of historical education and some real suspense.

Linking up with One Monthly Goal     Oh Scrap!    Monday Making
Design Wall Monday
P.S.  I bought this at Salvation Army this week.  It's a beautifully appliqued batik flower.  The professional framing is great but the setting is dull.   I plan to un-frame it and set the block in a more interesting way.  It's signed at the bottom corner: J K Coon, 2011. 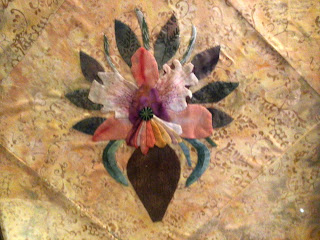 Sounds like a really nice outing-enjoyed the photos.
Loving your quilts, and repurposing, gorgeous batik flower you found-have fun changing that up
Happy new week

Once again you have bee very productive! I have enjoyed seeing all CW quilts! I don’t think I’ve ever seen a setting like the jewel box, it’s very interesting. Have a good week.

Love how your Jewel Box blocks turned out and the flimsy you got done with them. I love CW patterns and fabrics but have never tried one. Thanks for sharing.

what a treasure at salvation army - your quilts look great

Flocks of red-winged blackbirds live around us here in N Colorado, but I've never seen a nest - fascinating! I'm always so impressed with how well you keep up with the BH mystery clues, and love your stacking bins full of parts. Thanks, as always, for the book recommendations, too.

If this post is any indication, I am sure you will have a fabulous, creative and a busy year. Good Luck in your projects. Hugs.

I've enjoyed watching you work through those CW repros. I have to say though that I really like that intense pink with those blue and white Jewel Boxes.

It had been too icy here lately to even walk around out in the backyard to take photos.

Seeing photos of your walks is a treat. Some day I may remember to snap pictures, too. Several people are making Grassy Creek and I'm watching with interest.
I never would have made a Jewel Box quilt with so much white but it turned out great. And will look good in a house. Of course I like the red/pink alternate blocks. Those are always the colors that run out first in my stash.
Good luck with the batiks. I'm planning to use some of the fabric you sent me soon. And thanks for the book recommendation. I will check it out.

I am a walker too and enjoyed seeing your snaps !

Congratulations on making a huge dent in your Civil War fabrics. I really am amazed how different your Jewel Box quilt looks. Amazing what playing around with a classic block can do to make it look new.

Please know that I love seeing all your projects and admire all that you do. You are so prolific and produce such amazing quilts.

I only wish I could be as productive as you! And all your hikes. I love the scenery but have not had the nerve to go outside much.

Looking forward to all your new challenges this year.

The batik flower is lovely, I'm glad that it found a good home.

I am so delighted to discover your blog! I am not at all experienced with blogs so I hope I am not putting my comment in the wrong place. I feel like I have found my tribe! Quilts, books, hiking, PBS, and so much more that is near and dear to my heart. I will be asking my daughter to give me a lesson on blogging tonight!
The thing that drew me in to your site was a search to learn more about Nick Shifrin's Bullseye quilt. I drool over it every night.

Both CW quilts look great. The second one is my favorite of the two. I like the secondary design that comes out when assembled. Good luck on your OMG this month.