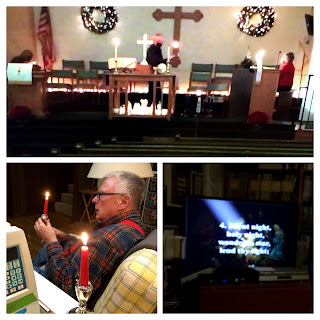 Thursday evening:   the first Christmas Eve service I've attended with my sewing machine.  That was so we could watch the Lessons and Carols on our church's YouTube channel.   We fervently hope that this was a one-and-only and that next year we can worship in person.  We dimmed the lights and lit candles for  Silent Night. 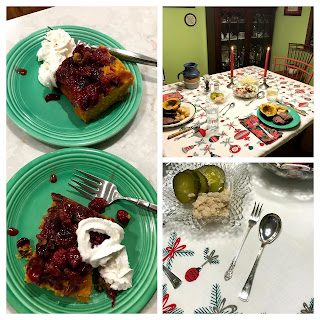 Christmas dinner: roast beef, acorn squash, braised parsnips. Pear/spinach salad.  Cranberry-pumpkin upside down cake.  The vintage tablecloth just covered the table. (The table is mid-19th century and not a standard size.)   And when was the last time you used a pickle fork?  LOL. 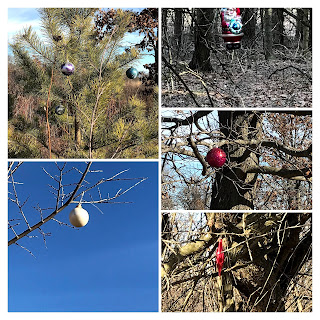 We went to Lyons Woods Saturday afternoon.  Ornaments were hung -- randomly -- on trees along the trail.  Once I caught on I kept walking to see if I could find more.  Two women I passed said they'd counted more than 40. 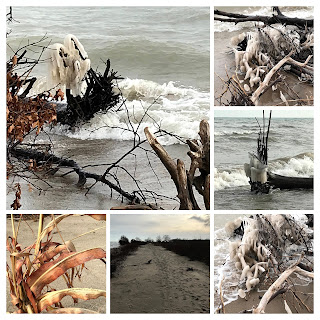 Though we are in a "snow drought" it's still gotten cold.  There was ice in the tree roots at Illinois Beach on Sunday.   Shoreline erosion toppled these trees within the past two years.

Lower center:  There is a bike trail (finely-packed gravel) under about a foot of sand. 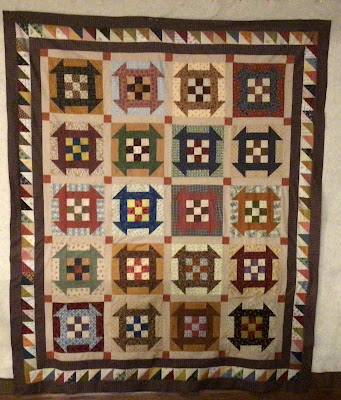 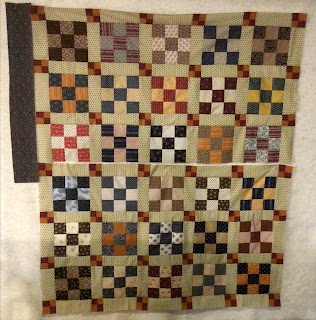 The next CWRSRP (Civil War Repro Stash Reduction Project) is nearly a flimsy.
The design idea is from a quilt called Blue and Gray by Etherington/Tesene.
Here are the 9-patches, flying geese, and red units for Clue 5 of Grassy Creek. 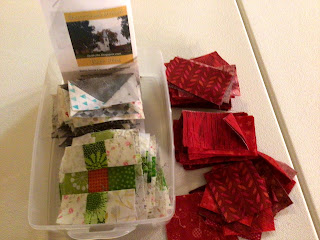 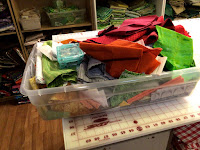 When I began the mystery the fabrics were neatly arranges in the box.  Five weeks in, not so much. 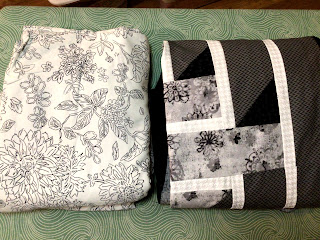 It's time to post December OMG finishes.   I said I would piece the quilt code-named Welcome Home.  (This is all I will show because it's a surprise.)  It is on the long-armer's schedule for the end of January.
The photo shows the flimsy and the backing (a black/white thrift-shop sheet).
# # # # # # # # # # 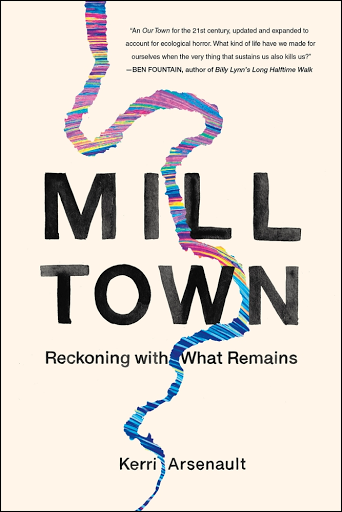 Kerri Arsenault's memoir Mill Town: Reckoning With What Remains has been named to several "best of 2020" lists.  The accolades are well-deserved.
Arsenault lovingly, critically, fearlessly, and lyrically describes the past and present of Rumford and Mexico, Maine, the community where she grew up. Her father, grandfather, and great-grandfather all worked at the paper mill that for 150 years has produced cardboard and coated stock. The bleaching process uses chlorine; its byproduct is cancer-causing dioxin -- and cancer is the primary cause of death many, many millworkers and members of their families. Arsenault probes to find documentation and to tries to get corporate admission of malfeasance. She describes growing up in the town where the smell of the mill meant the smell of money. She explores her family's journey from 17th century France to P.E.I. to early 20th century Maine. She acknowledges the challenge to Rumford/Mexico: how do company towns endure in an era of leveraged buyouts, takeovers, and offshore production? (She details how Rumford -- desperate to diversify revenue -- sold significant access to its water supply to Nestle/Poland Spring.)An important book, all the better for Arsenault's extraordinarily fine writing.
Linking up with Design Wall Monday    Monday Making    Oh Scrap!    OMG Finish @ Elm Street Quilts
Posted by Nann at 10:41 AM

There were ornaments hung from the bushes and trees at a natural area where a friend and I walk each week, too! A fun surprise! Your Christmas dinner sounds yummy, especially the dessert. Love the 9 Patch Churn Dash!

You must be sewing 8 hours a day at the rate you are churning out the CW repro quilts. They are all beautiful. I really do like antique type quilts even though I make bright more modern ones. I made my share of them 20 years ago.

The churn dash is wonderful and the pieced border is just what it needed.! Brilliant! Thanks for the book suggestion. Looks interesting, especially since I’m somewhat familiar with the area. Happy New Year!

I like your “ CWRSRP “ (Civil War Repro Stash Reduction Project) . I shall have to steal that for my quilt room. I enjoyed reading about the ornaments on the walking trail trees. Good idea.

Excellent progress on the the CERSRP. Your quilts are really lovely. Have you seen a dent in your collection again Civil War fabrics? We went way easy route for Christmas dinner: ham slices from Honey Baked Ham, scalloped potato’s, fresh green beans and a baked pear with maple syrup for dessert. The only thing involved was the potatoes. On to 2021!

I usually keep a vintage tablecloth on my dining room table. Don't you just love them? I use my grandmother's china with roses or my Depression Glass Cabbage Rose dishes I collected for years for the holidays.

What a fun way to dress up a hike with a game of "I Spy an Ornament".

You sure have made good use of those cw repros. Maybe next year I will dig into some of my cw repro scraps and UFOs. You sure have provided some inspiration.

Thanks for linking up with Elm Street Quilts One Monthly and congrats on your finish!

I have attended with hand sewing but not with my machine. I don't think I could hear over it. Our Christmas meal was much more casual.
Thanks for the next book recommendation. Non-fiction is my favorite.
Happy New Year.

We missed attending in person Christmas services this year, it's such a big part of our Christmas. We made it last year even though My Guy didn't get out of the hospital till just before services started. Love both the 9-patch churn dash and your CWR projects. Hope you've gotten in lots of stitching time this week between Christmas and New Years.