Road Scholar: a week at Exit 0

Note:  This travelog is presented in four parts.  Two posts are about the Road Scholar courses, one post is about the travel discoveries before, between, and after those courses, and one concerns family history. We drove 2,472 miles round trip.

Veteran Road Scholar travelers (those with several dozen RSs to their credit) all seem to have done this program. It is ranked among the “most popular” – likely that is because of the location close to New York, Philadelphia, and Baltimore/Washington – as well as the subject.

(Here is the course description.)

Cape May is Exit 0 on the Garden State Parkway.  To the east is the Atlantic Ocean; to the west is the Delaware River.   The Lenni Lenape hunted and fished there.  It was discovered by the Dutch and settled by the English, among whom were whalers who came down from New England to catch the whales who swam into Delaware Bay. In the 19th century it became the northernmost southern resort and the southernmost northern resort, easily reached by steamship.  “Recreating” was a new phenomenon and “ocean bathing” was recognized as a healthy pastime. During the Civil War this north/south city was quiet. In postwar prosperity it boomed. Tourism declined in the 1880’s because people could travel by rail (and the railroad didn’t reach Cape May). They dredged the harbor, filled in the marshes, and billed the town as the “Newport of New Jersey,” but for most of the 20th century it was a sleepy backwater town. Coast Guard and Navy bases operated in WWII (and the Coast Guard is still there).  In the 1970’s the city government realized they had the largest stock of intact, un-remodeled Victorian housing in the mid-Atlantic region. They capitalized on historic preservation and today Cape May is a bustling resort town ten months out of the year. (Victorian Halloween and Dickensian Christmas are popular celebrations).


Programs each day went into detail about aspects of American Victorian life and culture.  Costumed interpreters portrayed Dr. Emlyn Physick and his mother and aunt who were real-life arbiters of society in the 1890’s.  We toured the Physick Estate for an inside view of Victorian ornamental excess. After lunch we had a walking tour of Victorian architecture.  One evening we participated in a lively debate about women’s suffrage and temperance.  We had a visit from John Philip Sousa, who had extensive Cape May connections.

Our hotel was convenient to the beach and to downtown.  I was up early each day to take pictures of the sunrise.  (A New Jersey friend suggested I get sunset pictures on the Delaware side. Alas, the one evening I could get away to try the skies were cloudy.)

Most of the 32 Road Scholars were from the east coast. There were many first-timers, but one man was on his 162nd RS program!  We enjoyed the week, our 29th RS, very much. 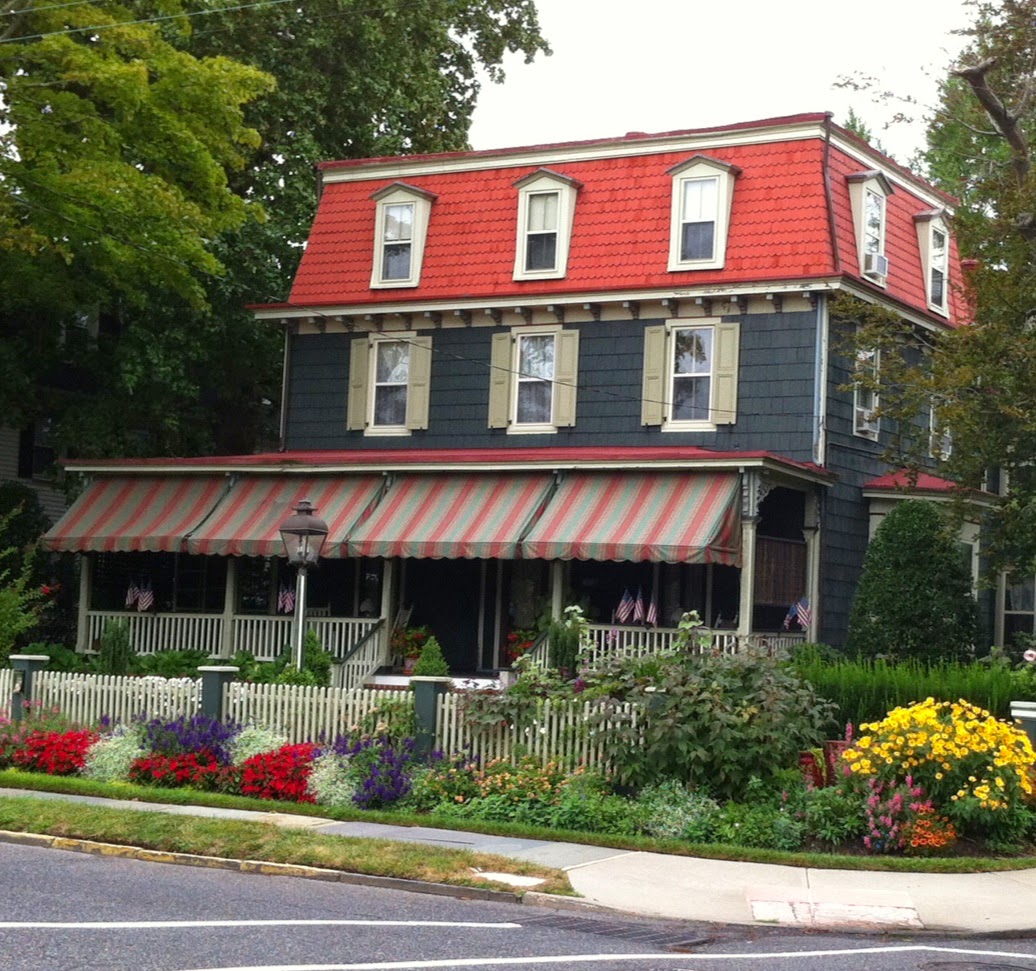 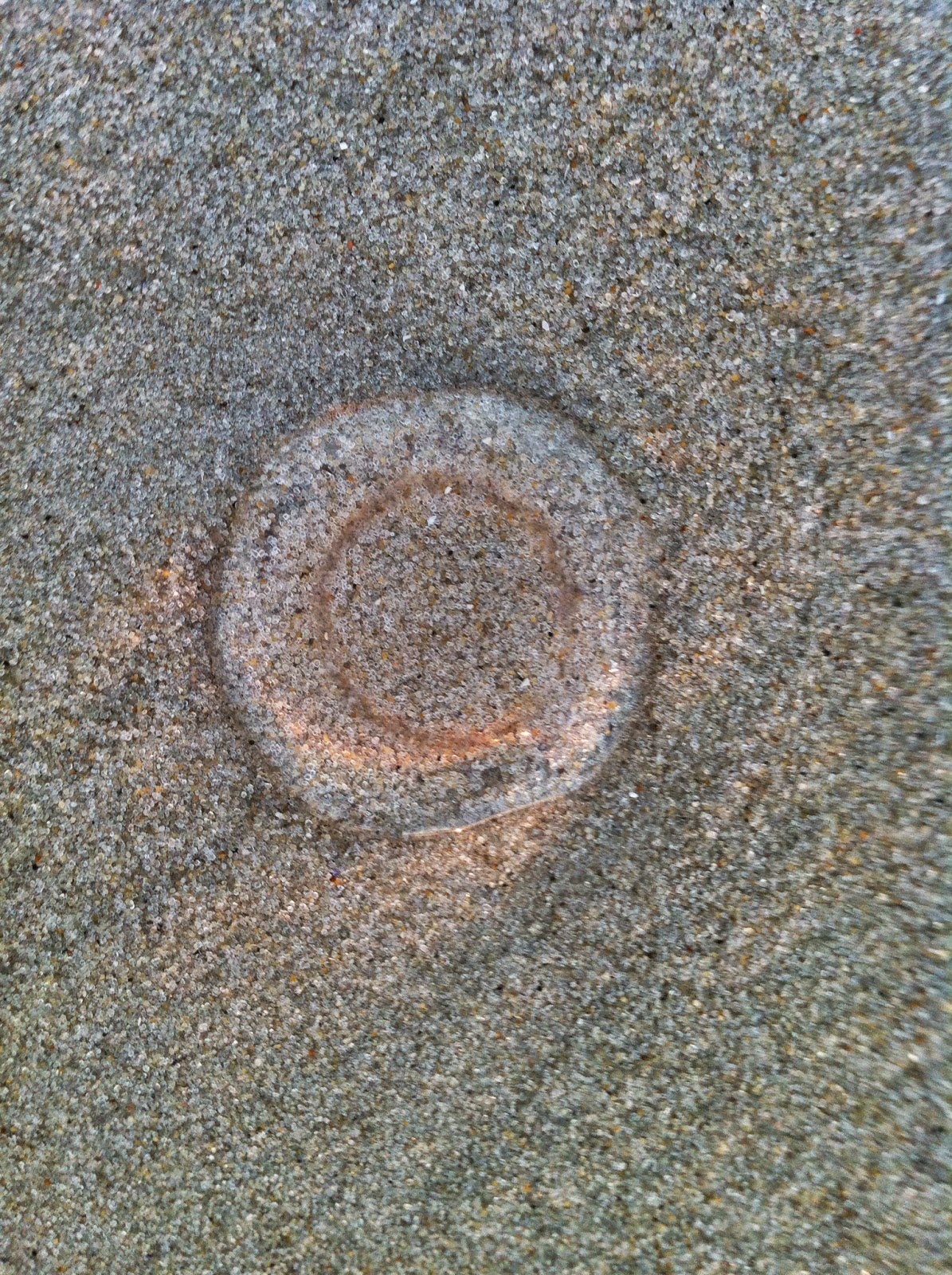 Moon jellyfish washed up on the beach.  (About 4" diameter, no tentacles; texture like pliable plastic.) 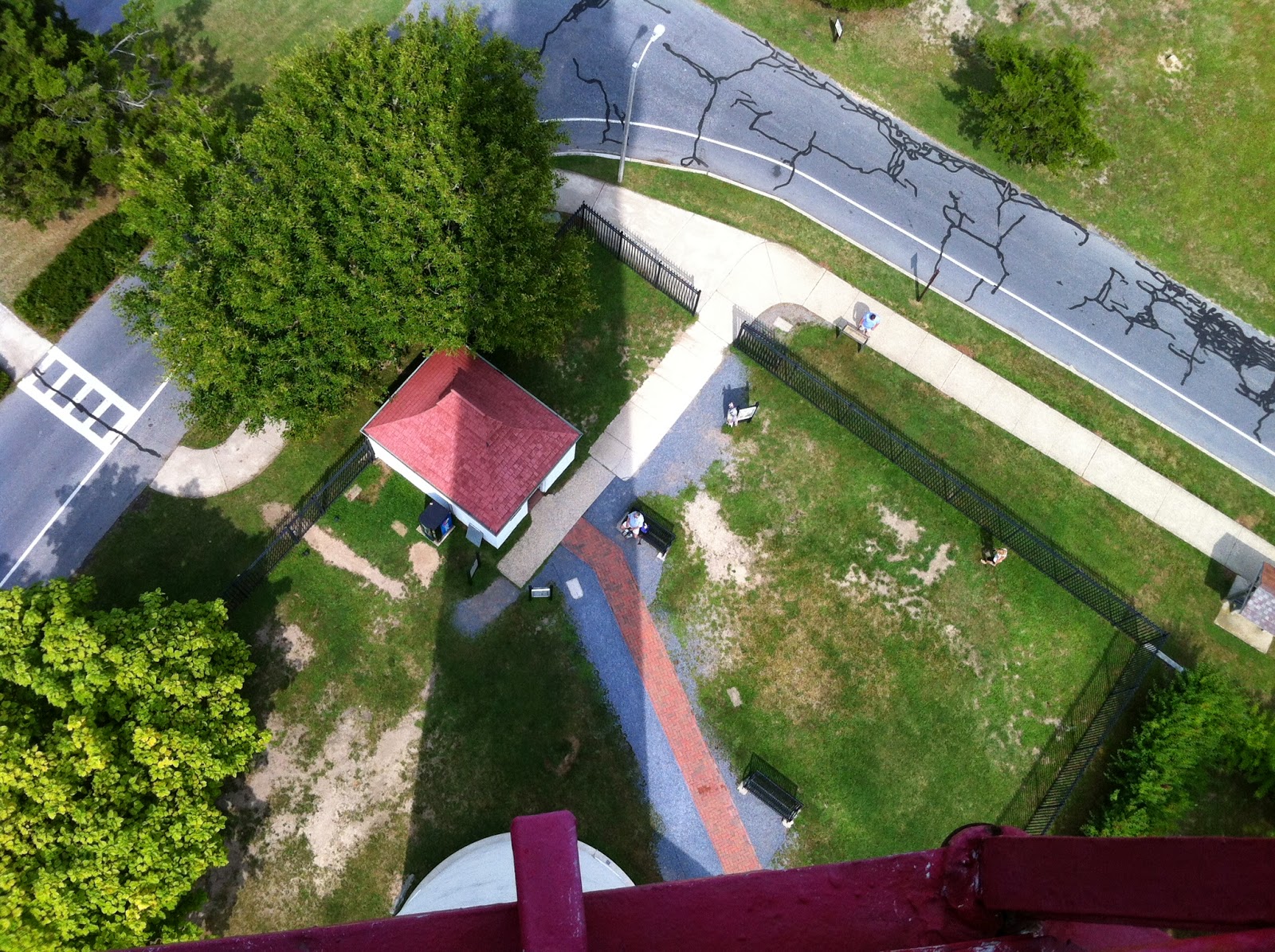 The Cape May lighthouse. Stevens is sitting on a bench (half in shadow, half in sun). 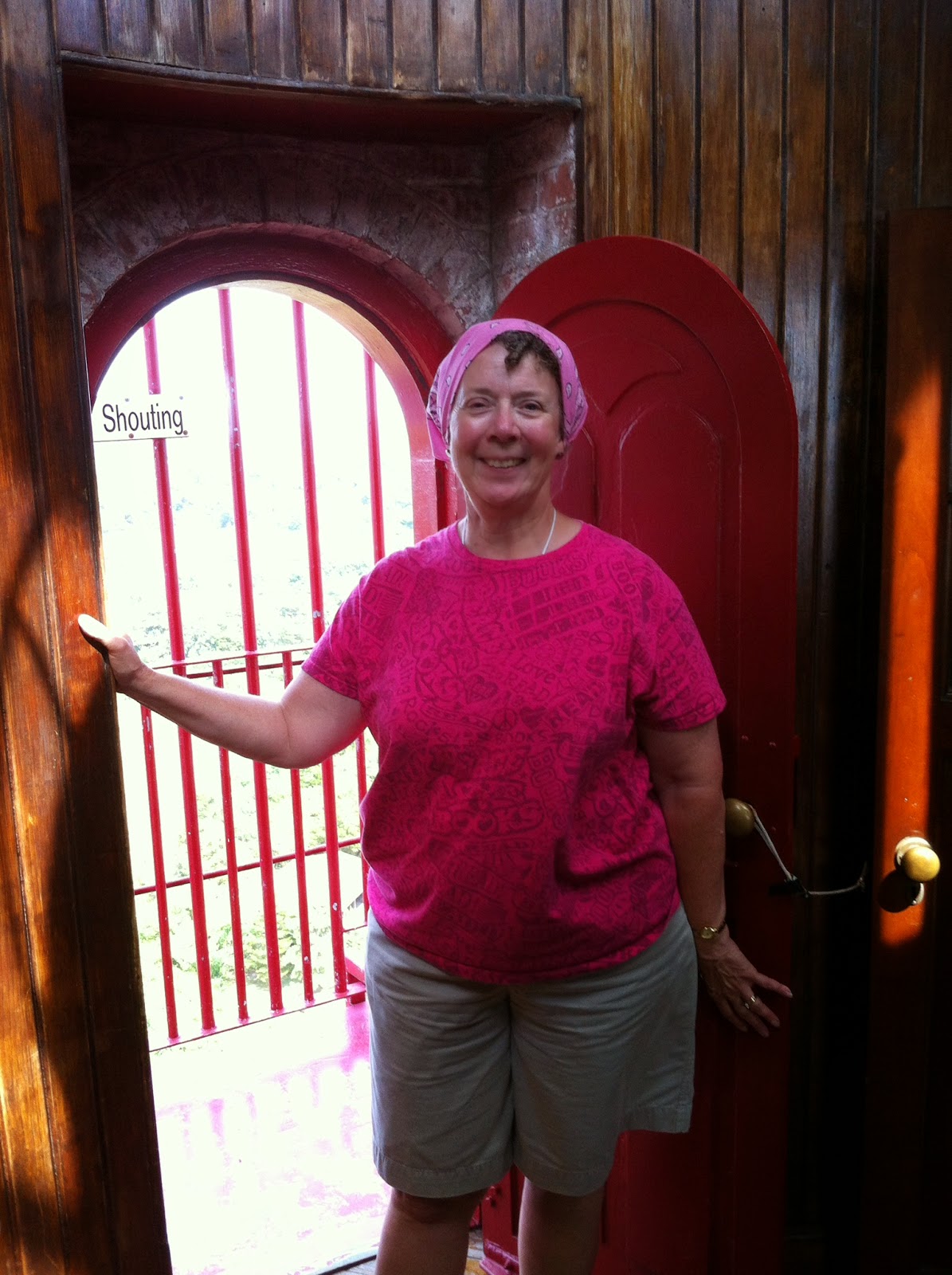 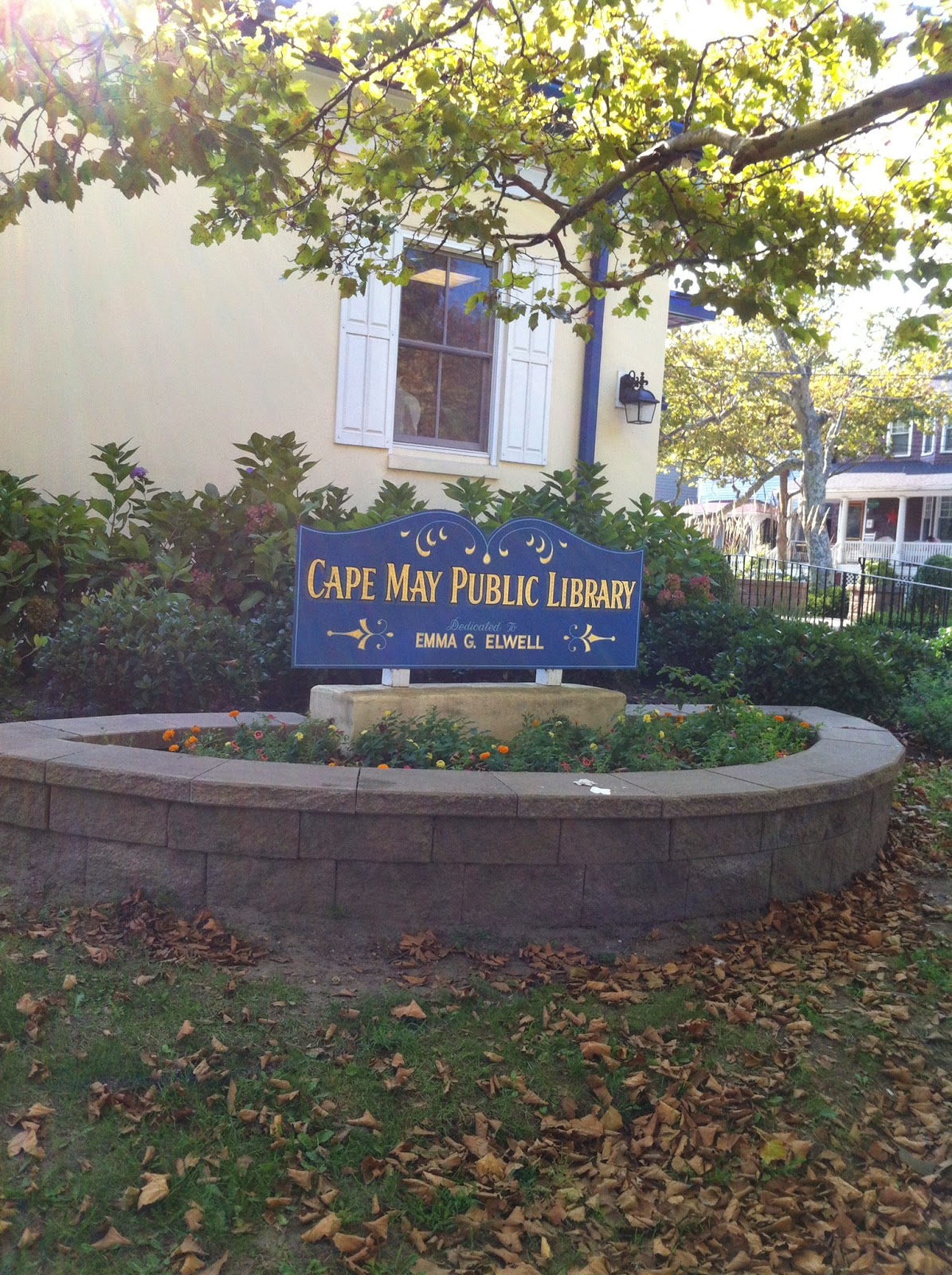 Of course I had to visit the public library. (It is a branch of a county system.)

Cape May is such an interesting place--frozen in time. That's my favorite stretch of the Eastern Seaboard. My brother had a beach house on the other side of the bay near Bethany for many years and I loved visiting there. I'd like to know more about the Road Scholar program as my husband and I love to travel and visit new places.

I've never been to Cape May, but I've been on several Road Scholar trips.....China, Alaska in winter, Molokai, Copper Canyon, a 3 week immersion Spanish class in Cuernavaca, Dia de los Muertos....Just to name some of them. Love their trips!!

Love the sign you're hoisting! Your pictures are beautiful, and the descriptions evocative. I can't believe you drove, not flew!