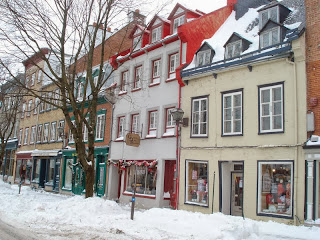 (I meant to write this and post it immediately after our return!)

Q.  Who chooses to spend Christmas in the company of strangers? 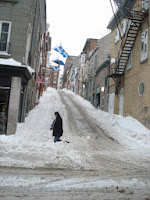 We’ve traveled with Road Scholar (Elderhostel) since 1996.  2013 nearly got away from us without a RS program – but we made it just in time with our Christmastime trip to Quebec.  During Stevens’ twenty years in parish ministry he was, of course, at work on Christmas.  Now that he’s retired we have flexibility at holiday time.


We purposely arrived on Friday, a day early, to allow for bad weather and to provide another day of sightseeing. We’re glad we did because we arrived at the beginning of a snowstorm that socked Detroit and Toronto with extensive power outages. (Three others in our group were delayed 36 hours and another couple didn’t get luggage for two days.)


Our accommodations at the Hotel Manoir Victoria were excellent.  Located in old Quebec, It is an old hotel that has been extensively renovated Most of our group meals were in its restaurant. The food was excellent.  There were many restaurants in the neighborhood, ranging from Tim Hortons (like Dunkin Donuts) and Paillard (like Panera) to fancier places.
﻿﻿﻿﻿﻿﻿

Saturday dawned cold and snowy. We had a free day!  After a Tim Hortons breakfast we called a cab to take us to the Quebec Aquarium.  The brochure said it was open and it was not on the itinerary for Road Scholar. We took a cab (it’s about 8 miles west of the city).  What a wonderful choice!   There were inside exhibits.  Sea rays were swimming in an open pool and we could pet them. It was close to feeding time and they nibbled our fingers.  The jellyfish exhibit featured large tanks, each with a different species. The tanks were lit with revolving colors.  Beautiful!   There were outdoor exhibits, too:  seals, walrus, and polar bears.  The keepers poured buckets of krill into the walrus tank and we watched them flip and twirl to get their lunch.   We had our own lunch in the cafeteria in the largest exhibition building, which had more tanks with “regular” fish (cod, haddock, etc.) and tanks with colorful tropical fish.   We thought we’d need to wait 20 minutes or more for a cab to come to take us back downtown, but we were in luck: we called and the cab arrived just 5 minutes later.


(A note about language:  French is definitely the first language, but French-speakers easily switch to  English.  I thought I had had a pretty good clipped “bon’zhour,” but my accent betrayed me and the reply would be in English.)


The Road Scholar portion of the trip began with dinner on Saturday.  Participants were from as far as Sunnyvale, California, and as near as Barrie, Ontario.  The youngest participant was 8-month-old Harper who was with her parents (from Massachusetts) and her maternal grandparents (from Maine).  There were three physicians (two of whom were retired) and three nurses. I was the only librarian this time.   Susan, our group leader, is a Toronto native who became a tour guide after retiring from a career in corporate HR in Quebec City.  This was her first Road Scholar group. 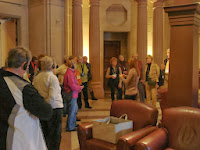 After breakfast Sunday we were introduced to Stephen M., a retired teacher who is an expert on Canadian and Quebecois history.  His presentation was easy to follow and I took pages of notes (if I write, I remember).  We then got on a bus for a short ride to the Musee des Beaux Arts.  It was still snowing and we admired the ability of all the Quebecois drivers (cars/cabs, busses) to negotiate the steep hills of the old city in the not-yet-plowed snow.  The museum has collections of local and regional works as well as fine art from Europe.   We had lunch at the museum restaurant.   That afternoon, back at the Victoria, Stephen told us the rest of the story about Canadian/Quebecois nationalism.    Sunday dinner was at a lovely restaurant just around the corner from the hotel, but in the cold and snowy weather it was a long walk.
﻿ 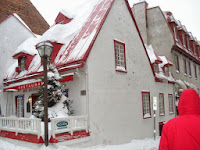 Monday: clear skies at last, but very cold. We bundled up and walked to the Farmer’s Market, which was bustling with Christmas shoppers. Lots of wonderful food stalls!  Our lunch was at Aux Anciens Canadiens, a very old restaurant in a very, very old building.  (I remember eating there when my family vacationed in Quebec in 1966.)  We had traditional tourtiere (meat pie) and with maple syrup pie for dessert.   That afternoon, at the Victoria, Stephen presented the next chapter of Quebecois politics.  (To note:  Canada passed women’s suffrage in 1917 but women could not vote provincially/locally in Quebec until 1940. The Catholic church controlled public schools until the Ministry of Education was created in 1964.  Now the province is very secular.)   Monday dinner was on our own. We chose Paillard (like Panera). ﻿﻿﻿﻿
Tuesday, Christmas Eve:  sunny and very cold.  We walked from the hotel to Le Musee des Civilizations. We had a guided tour of the permanent exhibit about Quebec and Canadian history, with many artifacts.   We said goodbye to Stephen M. and the group dispersed for lunch on our own and a free afternoon.   Stevens and I chose lunch at the museum and then enjoyed two other exhibits there:  La Belle Epoque (Paris in 1900) and about First Nations/native cultures in Quebec.  Stevens went back to the hotel. I took a walk to enjoy the snowy streets and the brightly-lit shop windows in the old city. I found myself at the Musee de L’Amerique Francophone – a museum about the French in North America.  It was open, and Tuesday was free-admission day.  My tour was quick and well worth the time. 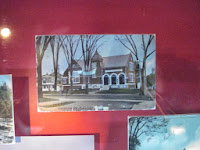 This postcard was in an exhibit about correspondence from Quebec to the U.S. I recognized the Waterville (Maine)Public Library right away.    The tile floor was in a former chapel now part of the Francophone  museum....quiltmakers take pictures of tile floors! 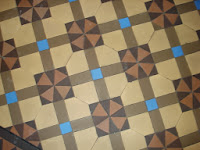 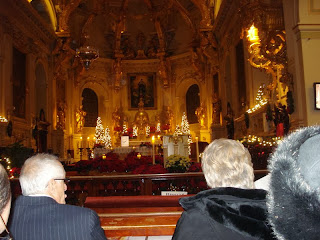 RS reconvened for reveillon – Christmas Eve dinner – elegantly-presented turkey with root vegetables and a wonderful carrot-parsnip soup.   Christmas Eve services were optional, and we and a half-dozen opted to go to the 10 p.m. mass at Notre Dame Cathedral.  2014 is the 350th anniversary of the parish, which once was the ONLY parish in North America north of Spanish territory.   The  present cathedral was built in 1929.  It has a new feature, a Holy Door – one of eight in the world, designated by the Pope. It’s a real door cut into the exterior wall, made out of bronze with interior illumination.  The sanctuary was packed for the service. The archbishop greeted us in French, English, and Spanish. 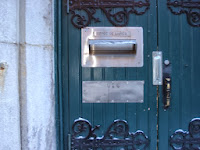 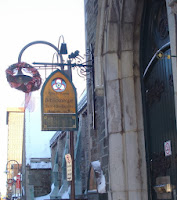 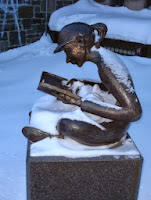 ﻿﻿Wednesday, Christmas Day:  sunny and cold, once again.  Breakfast was on our own (Tim Hortons for us). We took a walk in the neighborhood – shops were closed but some restaurants were open.  The group had brunch in the hotel restaurant – another lavish meal.  That afternoon I took a long walk along St. John Street.  I found a branch library (closed, of course) in a former Anglican church.

At 4:45 the RS group, attired in their finery, gathered in the hotel lobby. We divided into groups of four for horse-drawn carriage rides to the Chateau Frontenac.  Despite heavy lap robes, it was a very, very cold ride. Our driver was a jolly woman who wanted to give us the tourists’ spiel. All we wanted to do was get there!   The event was the Frontenac’s Christmas dinner-dance.  It was glamorous indeed – a six-course meal, a live band – for a crowd of 350.


Thursday:  breakfast at 7:00.  Time to say good-bye:  hugs, good wishes, promises to write.  The glow of our shared experience helped make the next hours (somewhat) bearable.  Our flight from Quebec to Montreal was slightly delayed.  Our flight from Montreal to Chicago was delayed 40 minutes.  We were in the air 15 minutes and then called back due to a landing gear malfunction. The pilot could not continue (maximum flying time for the day). The relief pilot could not get through customs (which closed at 8 p.m.) Eventually an incoming flight arrived and its crew could take us to Chicago. We touched down at 11:30 p.m. (CST) and got home at 1 a.m.!


﻿
We thoroughly enjoyed the trip.  The accommodations and the food were excellent. The mix of sightseeing, lectures, and free time was just right. The group leader and lecturer were knowledgeable.  And, as always, our fellow travelers were interesting and interested.  What a great way to end 2013!

Hello, Nan...enjoyed your trip review. We have traveled with RS about 10 times and are never disappointed. (Well, except for the hotel on Moloki....OMG! What a dump) Glad you had fun.

What a wonderful travelog! your pictures are great and I'm glad you had such fun and returned home safely. Polar bear, indeed, LOL!