Just a few photos from our trip 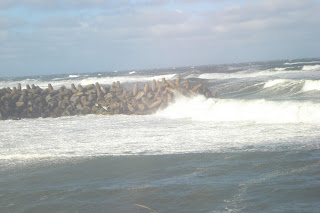 P.E.I. and the Magdalens: two weeks in Atlantic Canada

Our fall Road Scholar/Elderhostel trip, 9/11-9/24, is now a happy memory.   We actually participated in two RS/EH, back-to-back and in the same place.   We began in Charlottetown, P.E.I., and continued to the Magdalen Islands (Iles de la Madeleine), which are part of Quebec, although they are closer to P.E.I. and Cape Breton (Nova Scotia) than they are to mainland Quebec.

We arrived in Charlottetown late in the afternoon of Saturday, September 11,  The program began on Sunday evening which gave us a free morning to walk the 2.5 miles from our hotel to downtown.  (We took a cab back, however.)

There were just 9 participants in "The Island Way of Life," the smalled RS/EH we've been in.  Our group leader, Cathy B., is a francophone Madelinot, and our bus driver, Bobby A. (Cathy's partner), is an anglophone Madelinot.  P.E.I. is very English and the Magdalens are more French than English.

We had a tour of historic Charlottetown, including the excellent museum Founders' Hall.  Its interactive, multimedia exhibits tell the story of Canadian history and the pivotal Charlottetown Conference in 1864 which led to the Confederation in 1867.  We went to Province House,  the seat of P.E.I government. (The provincial assembly has 27 members...but then P.E.I. population is 137,000.) Green Gables  is a must for all P.E.I. visitors.  It was a thrill to see "Anne's house," the Haunted Wood, and the other places made famous in Lucy Maud Montgomery's novels.   The guide said they have as many as 1200 visitors  day at in the height of the summer season. Thankfully it was much, much less crowded when we were there.

On Tuesday we went to the little town of Souris where the ferry to the Magdalens docks.  After a five-hour trip we were finally on the Magdalens!   The tourism information is here:  http://tourismeilesdelamadeleine.com/   We stayed at La Salicorne ("salicorne" is a saltwater plant--seawort, in English).  Accommodations were good and the food was fabulous!

So, what did we do?
*  Island tour, from one end of the archipelago to the other.
*  Tour of the fishing wharf.  The Magdalens were settled because of the seafood:  lobster, cod, halibut, herring, scallops, clams, oysters.  (Tourism did not became a major economic factor until the 1970's.)
*  A beach walk, with time to wade (and I did) in the not-too-cold Gulf of the St. Lawrence.
*  A nature walk, led by a francophone guide (her English was very good).
*  A visit to a smokehouse (herring), an artisinal cheesemaker (cattle are the breed Canadian), a winery ("bagosse" is distilled from locally grown fruit--sweet and high alcohol content), and a microbrewery ("L'abri de la tempete"="shelter from the storm").
*  A visit to the Mines Saleine, the salt mine.  Geologically the Magdalens are salt domes that go 5 KM down.  Salt was discovered in the late 1960's when Texaco came to drill for oil. There is oil, but they've been busy extracting salt since the late 1970's.   The mine is now the largest private employer in the Magdalens.

The first RS/EH program ended Saturday morning.  Everyone but us departed!  The second program began that afternoon.  (The first people we met were a couple from Antioch, Illinois--just 10 miles from where we live.)   There were 11 people in the second group.  Some of the activities were repeated from the first week, which was fine with us:  the beach walk and the island tour were splendid the second time around.

On Sunday we broke off from the group to go to the morning service at St. Peter's-by-the-Sea, one of the three churches in the Anglican parish.  There were 6 in worship that day:  the senior warden and his grandson, the priests (husband and wife), and us!

Our group took the ferry to Entry Island, the one island in the archipelago accessible only by boat. It's one of the English settlements.   (We learned that for decades the French and the English stayed separate by choice.  In the last 25 years or so intermarriage has become more common.  The schools are either French (parochial) or English (depending on the town), and the high school is French (so anglophone students go to Charlottetown and board).)

Hurricane Igor drenched Newfoundland with 200ml of rain on Sept. 21.  The Magdalens had sunny skies that day but *50-knot* winds (over 60 mph).  That day was our island tour.  We made it, albeit buffeted about.

Departure was early Thursday.  We had a ride from Souris to Charlottetown, the kindness of fellow Elderhostelers who parked their RV at Souris.  And home again on Friday.

Selected photos will be in the next post!
Posted by Nann at 4:06 PM No comments:

What I made next 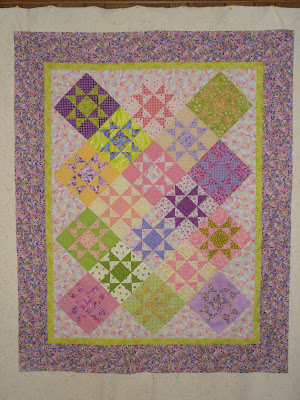 I wrote yesterday that I was weary of "happy scrappy houses," as cute and perky as they are.  I had some 9-1/2" Ohio star blocks that didn't make it into a previous project (see this post).  I put them up on the design wall.  The setting trianges are one of those "I can't cut this!" prints that I've had for many years.  I found out I had nibbled away at it so much that there wasn't as much left as I thought, but there was enough for this project.  The border prints haven't been in my stash quite that long.  This flimsy is about 54 x 65.
Posted by Nann at 4:21 PM 2 comments: 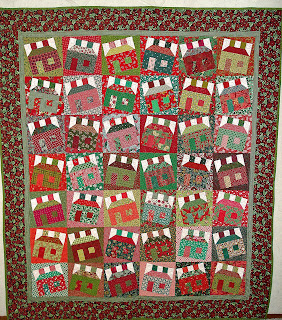 This is "Christmas Cottages I," made for the Waukegan Area Branch of AAUW for its holiday raffle.  The block is Happy Scrappy Houses by Bonnie Hunter.  The houses are 8"; with the setting triangles the blocks are 9.5" finished.  The quilt is approx. 69 x 78.   I finished the quilting and the binding today!
A companion quilt ("Christmas Cottages II") is in the works.  It will be the Friends of the Library holiday raffle.  One of my coworkers is making cottages for CC-II.  I welcome her assistance because, truth to tell, after making 42 houses for CC-I and 28 (out of 42) houses for CC-II, plus 12 non-Christmas houses for a BlockSwappers exchange, I'm ready to work on something different!
Posted by Nann at 7:43 PM 4 comments: