All aboard the S. S. Badger....and pure Michigan!

We commemorated our 30th anniversary by trying a new method of traveling.  We took the S. S. Badger carferry from Manitowoc, Wisconsin, to Ludington, Michigan, last Thursday (and did the reverse today).  We'd always wanted to try it! (And everyone to whom we mentioned it said, "Oh, we've always wanted to try it.")  The Badger was built in 1953 as the last in a fleet that first carried railroad cars across the lake. Passenger service was added later. The Badger and its sister the Spartan were taken out of service in the 60's.  (Badgers, Spartans....no mention of Wolverines.)  In the early 90's entrepreneurs got the idea to start up the ferry, this time to take passengers and their cars.  The Badger makes the trip. The Spartan is docked at Ludington and is used for parts.

The 60-mile trip takes four hours.  The ship is like an un-fancy cruise ship, with several lounges, meal service, a movie theatre, an arcade, a kids' playroom, and staterooms.  We chose to stay on the upper deck both trips.  The weather was BEAUTIFUL and the lake was calm.
We stayed in Ludington Thursday night.  Friday we explored the town, which had its origins as a lumber port to ship Michigan white pine to Chicago and elsewhere.  We thoroughly enjoyed White Pine Village, an assemblage of 19th century houses and shops.
Friday and Saturday nights we stayed at the Honor Motel in the tiny town of that name.  We caught the sunset at Point Betsie on the lake.  Here in Illinois we can see beautiful sunrises over that same lake -- but these Michigan sunsets are incredibly spectacular.   Kitesurfers were taking advantage of the surf. 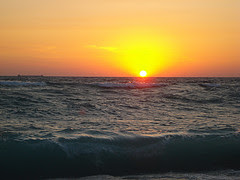 Saturday we explored all of the Sleeping Bear Dunes National Lakeshore.  I remembered the steep, sandy dunes from our 1959 family vacation -- and they are still there!  I made it to the first plateau of the dune climb.  Stevens waited down below.
We drove up to Leland where we had a late lunch.  Leland's history as a commercial fishing port is marked by Fishtown.  There are now many fishing charters and the ferry to the Manitou Islands.  (No time to go there this trip....maybe next time?)  Stevens bought smoked trout and fish sausage at a market in Fishtown.  (He managed to keep both cool and they're in the fridge now.)   That evening we went back to Point Betsie for the sunset.  It looked much the same as the evening before -- and we enjoyed it as much!
Sunday we had a late breakfast and headed south to Ludington via the shore route.  That took us through several small towns and one larger one:  Manistee. Stevens' cousin Frank Mitchell was a prominent citizen of that city, according to The History of Michigan, elected as its mayor in 1915.  I found his address and we found the house and got photos.  Manistee looks a lot larger than it is (pop. 6500+).  Its main street is along the river and the storefronts have been nicely restored.  (The historical society was not open that day, unfortunately, or we'd have tried to find a photo of Cousin Frank.)
We returned to Ludington in time for dinner on Sunday.  I went to the municipal beach to get pictures of the sunset. That evening was partly cloudy, but I could see the sun's outline.  Even better, though, were the pictures I got of the S. S. Badger leaving port. It was the last night run of the season! (There is one trip each way daily through October, when service ends for the winter.) 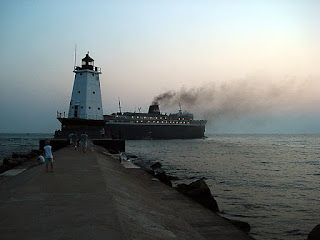 And all too soon it was morning and time for us to board the S. S. Badger for the 9 a.m. return trip.   We arrived on time, got our car, and headed back to Illinois.  We pulled into our driveway at 2:30.   Our "pure Michigan" getaway was a wonderful trip indeed!
Posted by Nann at 8:17 PM 4 comments:

Sawyer Pictures are hand-tinted photographs of scenes in northern New England (New Hampshire, mostly, and also Maine).  I discovered them at a shop in Brownington, Vermont, in 1998, and bought "Sunset on the Kennebec."

For a product that was fairly widely distributed (think "quality souvenir"), apparently not many were purchased by Midwesterners because I haven't found them at sales or in shops in this area.  Today I found another one at an estate sale in Highland Park.  The man said, "It's a watercolor. $45."  I said, "It's a hand-tinted photograph.  $40."  He made a show of putting a jeweler's loupe to his eye. "It's a watercolor," he insisted.  I said, "Well, then I'm not interested," and began to walk away.  His daughter said, "Oh, Dad.  We'll take $45 for the picture and these other items." (A cookbook, one of L. M. Alcott's romantic thrillers, a box of vintage thread (the spools are labelled Willcox and Gibbs), and a box of contemporary notecards (c1996).)   The dad was not pleased, but I was.  And now "Crawford Notch from the Crawford House" joins "Sunset on the Kennebec."

There still isn't much online information, but I found   this Wikipedia entry.