(1) A bookshelf wallhanging for a coworker who has just received her MLS. The pattern is by Christine Thresh (winnowing.com). I've made it many times, though of course no two wallhangings are alike because of all the novelty fabrics and embellishments.
(2) Our guild had an orphan block challenge. We were invited to bring in orphan blocks (I took in a big stack) and then take some. I took just one, made four more, and created this 50 x 50 quilt. We are to bring the completed projects to the September 3 meeting. They'll be given to charity. I really like the autumn colors!
(3) This is what 366 Heartstrings blocks look like! I made one-a-day. This being leap year, that's 366. They busted 60 yards of stash. Seven 48-block quilts and one 3o-block quilt will use them all. 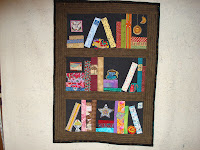 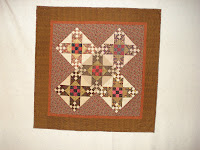 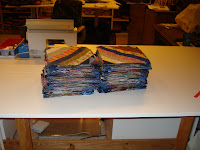 The 19th Amendment: 88 years ago today

(image from www.nwhp.org) There are areas where women and men aren't equal, but winning the vote certainly help to narrow the gap. Hooray for Harry Burn!
This is the way Garrison Keiller reported it in today's edition of "The Writer's Almanac":


"It was on this day in 1920 that the 19th Amendment was formally incorporated into the U.S. Constitution. It proclaimed, 'The right of citizens of the United States to vote shall not be denied or abridged by the United States or by any State on account of sex.' It ended more than 70 years of struggle by the suffragist movement.
"It had passed through the House and Senate. At first, it looked like the amendment was not going to make it. And then, a 24-year-old legislator from Tennessee, Harry Burn, decided to vote for the amendment at the last minute because his mother wanted him to. And Tennessee became the 36th state to approve suffrage for women.
"They sent the certified record of the Tennessee vote to Washington, D.C., and it arrived on August 26, 1920. Secretary of State Bainbridge Colby signed the proclamation that morning at 8 a.m. at his home. There was no ceremony of any kind, and no photographers were there to capture the moment. And none of the leaders of the woman suffrage movement were present to see him do it. Colby just finished his cup of coffee and signed the document with a regular, steel pen. Then he said, 'I turn to the women of America and say: 'You may now fire when you are ready. You have been enfranchised.'"
Posted by Nann at 6:32 AM No comments:

What it was, was Base Ball 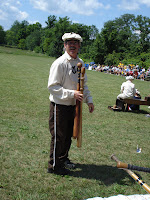 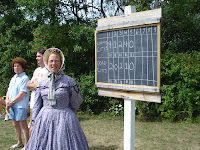 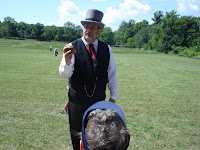 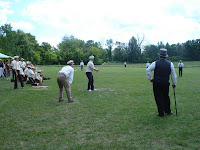 DH and I were in the stands on the grounds of the Wade House in Greenbush (http://www.wadehouse.wisconsinhistory.org/). The home team: the Greenbush Dead Citys. The visiting team: the Milwaukee Cream Citys (http://milwaukeecreamcitys.org/).
The field was the same size (90 feet between bases) though this particular field had a definite upward slope from 2nd to 3rd. No gloves, a variety of bats (some homemade, some reproductions), homemade balls (comparable to today's regulation size). An out could be either a fly ball OR catching after one bounce. Strikes were counted only for swings, not for pitching, and there were no balls (e.g. a player could not be walked). The game was 9 "rounds." "Well struck, sir," was the comment after a hit. The final score: Cream Citys 26, Dead Citys 7. I finished piecing "Christmas Ramble" this weekend.
Each block has 20 2.5" HSTs. (Doing the math: 600 HSTs in the 30 blocks plus 16 HSTs in the corners.)
The blocks finished to 11.5" and the entire top is 87 x 76. It used 8 yards of fabric, though I had to buy the red border since none of the reds I had on hand was just right.
The Friends of the Library will raffle this as a fundraiser this fall. I'm contributing the top and they'll reimburse me for the professional quilting. It feels good to have something completed in advance!
Posted by Nann at 6:23 AM 3 comments: