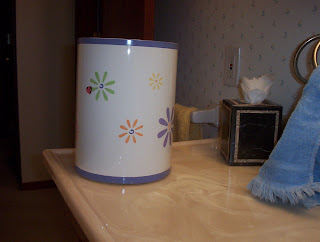 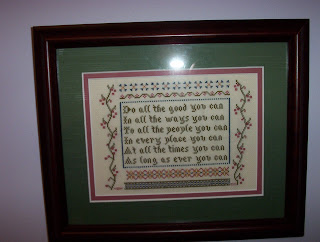 Today would have been my mother's 82nd birthday.
We used to tease her about the gift-giving challenge caused by having a birthday three days after Christmas. (To add to that, their wedding anniversary was December 14!). I look around at all the things I have that came from our parents, either as gifts or as inheritance--from the family antiques to the bathroom wastebasket. That purchase (post-Christmas 2001) was her way to demonstrate that even though she was so ill she could keep up with the ads and want to have some home improvement, however modest. She gave me the money and asked me to go to Kohl's to buy the wastebasket. IIRC it was $35, way more than she would ordinarily have spent, but she decided to keep it. That's a lot more than I'd spend on a bathroom wastebasket, too! (I can imagine her saying, "I'm glad you're getting good use out of it, dear.")
Far beyond things, of course, are the values that she and Dad taught. Another piece I kept is a cross-stitch picture that I made for Mother. The message, attributed to John Wesley, describes her so very well.
The picture and the wastebasket (!) are pictured here. The wastebasket is on the counter just for photography purposes
Posted by Nann at 8:52 AM 2 comments: 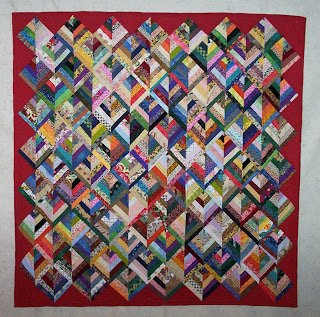 Ours is a small congregation. In recent years we have settled on having a Christmas Day service rather than a Christmas Eve service. That allows those who have families who belong to other churches to spent Christmas Eve with them, and then on Christmas Day to come and celebrate Christ's birth and participate in the sacrament of Holy Communion. DH's homily emphasizes God's gift to all of us, the Son.

That means that we are unscheduled on Christmas Eve! This year we watched "A Christmas Story." (The screenplay evolved from a combination of several chapters in Jean Shepherd's "In God We Trust, All Others Pay Cash." All of Shepherd's books are classics of American humor.) The movie came out in 1983. I'm was curious and I looked up Peter Billingsley, who played Ralphie. He's 36 now.)

While we watched, I sewed. After the complexity of "Storytime Readers" I was ready for something simple. I cut up contents of the 1.5" strip box into 7" lengths. I sewed them into 6's, then trimmed them to 6.5", sliced them in half, and reassembled them. I pieced the resulting squares randomly--no layout, just one square attached to another. The top is 60 x 60--and I quilted it last night. How nice to have a started-and-finished object ready for the next charity request! [The quilt was contributed to a Boys & Girls Club fundraiser in February, 2008, where it brought $125.]

Santa (in the person of DH) was VERY nice to me with two triple-digit gift certificates, one to Royce Sewing in West Bend and the other to Willett in Fond du Lac!!! 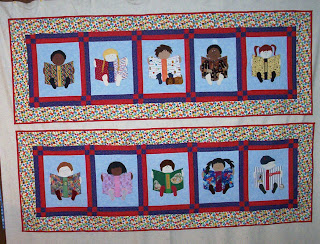 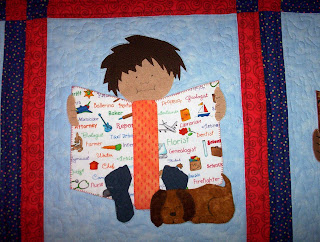 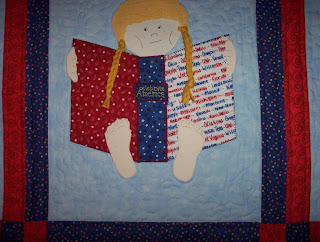 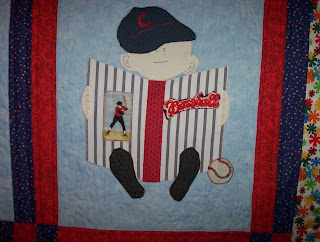 Shout it from the housetops! This UFO is done!
It started in 2005. The library received memorial donations for Mrs. G, who was the mother of Mrs. L who is one of our most devoted volunteers. Mrs. L and I talked about what to purchase with the contributions. A piece of artwork for the youth services room? Hmm. Mrs. G did a lot of needlework, as does Mrs. L. What about a quilt? I found a pattern called "Storytime Readers" by Cathy Wierzbicki (http://www.timetoquilt.com/quilts.htm). I began making blocks. Another library staffer made a block. And then I got stuck. Big time. No excuse, just frozen up. The blocks stayed in the box, growling quietly at me whenever I looked that direction.
I finally got tired of losing sleep over the embarrassment of this unfinished memorial gift. I decleared it to be my #1 Christmas vacation project. I took the blocks to the library and talked with the youth services coordinator about where the finished quilt might hang. Good thing I did, because we decided the most flexible way to set the blocks was as two panels. On Thursday of this week I made a special trip to Patched Works (http://www.patchedworks.com/) to get border and backing fabric. I sat down to sew. And the two panels are done!
BTW, the panels are 30 x 88. 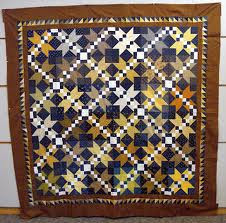 When I saw the Drinking Gourd block in Barbara Brackman's book on quilts and the Underground Railroad I knew I had to use it. I also wanted to make a quilt with a "butternut and blue" color scheme.
(Historical note: "follow the drinking gourd" was a folk song. The drinking gourd was the Big Dipper. Slaves headed north on the Underground Railroad would look for that constellation.)


I volunteered to coordinate a quilt to raffle as a fundraiser for the Illinois Library Association. The days got away from me and I never got around to contacting other quilting librarians. A call from the ILA fundraising committee chair saying that they'd like the quilt in January got me going. I made the entire top myself. The blocks are 12". The middle border is made from the cutaway triangles of the flying geese. The top measures 92 x 92. Yes, I'm sending this out to be quilted!


Dawn http://dquilts.blogspot.com/ also loves this block. She and I have made a pile of 8" blocks, though knowing her she's a lot farther along with them than I am. We're getting together next week so we can compare. 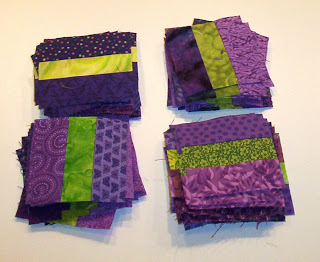 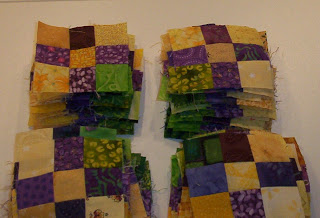 I've finished the first two steps in Bonnie's mystery. My color scheme is purple and lime, with yellow. I began collecting a palette of purples and limes last summer without a particular project in mind. What I've accomplished, of course, is to accumulate a big stack of fabric! This mystery project seemed like a good time to start to use them.

Stashbuilding for a good cause

We are starting a Boys & Girls Club in our community. (I say "we"
because I have gotten myself on the board. We really, really
need a safe, supervised, positive place for kids to go after school.
(We welcome kids @ the library but when they get bored they
get restless, and then they misbehave.) We have to raise
$100,000 in order to open the doors.

Last evening the Chamber of Commerce had a fundraising event
for the BGC: CommuniTies. Everyone who attended paid $5 at
the door and got a necktie.There were tie-related games:
ugly tie contest; a team effort to come upwith ways to use a used tie
(our team had 36--from belt, dog leash, and noose to g-string, jock strap,
and Boys & Girls Club fundraiser); and a novelty tie auction
(the Chicago Bears tie went for $400).

I said I would buy all the ties no one wanted to take home.
That turned out to be almost all of them (some were hideous!)
I got about 25 silk ties and have boxed about 50 polyester, etc.,
to give to Salvation Army.I'm happy to give (again) to this good
cause.

And, with my Rotary president's hat on, I was pleased
to present a check for$10,000 as our club's contribution.
Posted by Nann at 7:30 AM 3 comments:

It's December. This is northern Illinois. Snow is expected, and it happened last night.

I got up at 5:00 this morning, bundled up, and went out to clear the stuff away.
The snowblower started right up -- thanks to (a) having it serviced two months
ago and (b) DH's trying it when he was here at Thanksgiving. I finished the job
when the metal ring/hook that attaches the spring & chain for the auger to
the deadman's bar BROKE. It would best if Pete-the-repair-guy affixes a new ring (I'm not
good at jerry-rigging such things) but I'll need help lifting the snowblower into my car.
Hopefully I won't need to blow any snow until after Friday, because until then I don't have
day- or after-work time to go to Pete's shop.

As I was using the shovel to trim up the edges of the snowblowing I slipped
(ice from last weekend's storm) and fell. I hit my left shoulder -- ouch!--nothing
broken, just tender.

(I realize I have just written one of those day-in-the-life blog posts. Other
bloggers would insert a photo of the snow here, but it's still dark outside.)
Posted by Nann at 8:30 AM 1 comment: