It's been five weeks since I took ravine photos. What a change from April ! 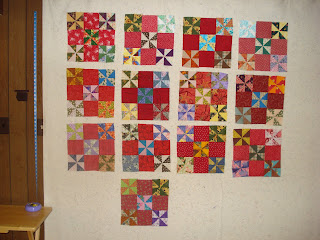 I looked at the pinwheels (see Monday's post) and thought, "How would Bonnie   set these?" Here's the work in progress.  I want to make three more nine-patches.  The sashing and the border will be scrappy (but probably not red).
Posted by Nann at 6:24 AM 7 comments: 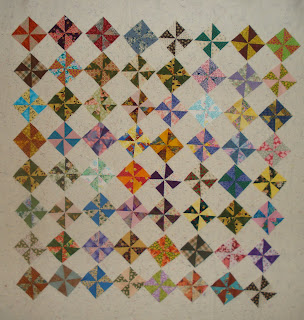 These pinwheels are made from 3" squares, stacked in pairs, and stitched as leaders-and-enders. The HSTs are trimmed to 2.5" and sewn together (still leader-and-endering). The blocks are 4.5" (4" finished). This configuration is just a possibility. I may make more pinwheels.  I may decide to set them completely differently.  Stay tuned!

(There were not many pairs of blue 3" squares in the box...it's not that my stash lacks blues, mind you.)

3" squares have been one of my standard scrap sizes since 1999 when quiltmakers swapped packets of charm squares to make Y2K quilts  (2000 different fabrics).
Posted by Nann at 5:55 AM 1 comment:

In the garden: May 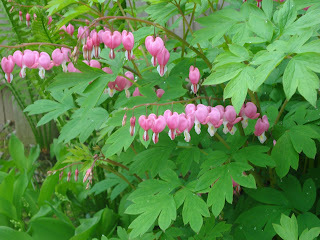 By the shores of Gitche Gumee*

"Lake Superior: Culture, History, and Walks in a Spectacular Setting" was the title of last week's Road Scholar trip.  We stayed at the historic Naniboujou Lodge outside Grand Marais in northeastern Minnesota.

The weather cooperated:  cool, some cloudy days but also some sunshine. It was too early for mosquitoes and blackflies so we could hike through the woods comfortably.  Our 27 fellow Road Scholars came from as far away as California, but most from the Twin Cities.
We began each day with Tai Chi Chih exercises (a variation of traditional Tai Chi). We hiked in the woods along the Brule River.
We spent
Wednesday at Grand Portage. The video was taken at the High Falls, the highest waterfall in Minnesota. Grand Portage National Monument is a restored fur trading post. The portage was an 8.5 mile shortcut between Lake Superior and Fort Charlotte.


Over the course of three evenings Karl Koster told us about the fur trade -- the Hudson's Bay Company and the Northwest Company, the voyageurs who were "the long-distance truckers of the era," and the beavers whose pelts were sold as far away as China. Karl is a reenactor par excellence!

*Longfellow spelled it "gitche gumee" in "The Song of Hiawatha." "Gichigami" is Ojibwe for "Big Water," or Lake Superior.﻿
Posted by Nann at 2:22 PM 3 comments: