Bishop Hill, Monmouth, and on to St. Louis (with quilts!)

Bishop Hill was founded in 1846 when a charismatic Swedish pietist named Erik Jansson and 1100 followers journeyed from Sweden to western Illinois (walking the last 150 miles from Chicago).  The colony flourished with 14,000 acres, a steam-powered flour mill, a furniture shop, a brick yard, a wagon maker, and a dairy.  They cultivated broom corn and bought broom-making equipment from the Pleasant Hill Shakers.
In 1850 Jansson was murdered in a dispute over a Janssonist girl marrying an outsider.  Administration of the colony was turned over to a board of trustees.   In 1857 bad investments ruined the colony's finances.  In 1861 most of the able-bodied men enlisted in the Union Army.  Loss of funds and loss of manpower culminated in the dissolution of the colony in 1861.

The State of Illinois owns several of the historic properties and others have been privately restored.  The town has 150 people and there are many "event weekends" held each year.

I first read about Bishop Hill in a New Yorker magazine article in the mid 1970's.  I finally got to see it! 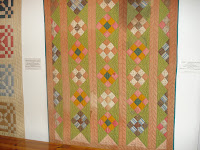 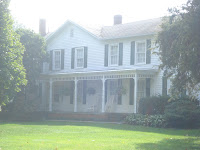 Monmouth College, in the city of that name, is about 35 miles from Bishop Hill.  Two women's fraternities were founded there:  Pi Beta Phi in 1867 and Kappa Kappa Gamma in 1870.  Kappa's Stewart House was closed today, but I took pictures of the exterior.  Pi Phi's Holt House was open and the curator provided a thorough tour. 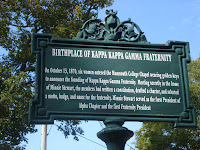 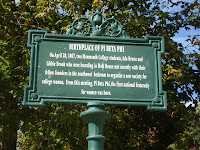 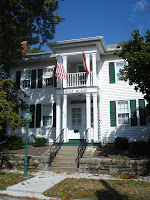 I am taking the long route to St. Louis for this week's P.E.O. convention.  I set out in good time this morning.  The light rain did not cause traffic delays.  That was helpful because when I got to Rockford -- about 80 miles from home -- and stopped for gas I discovered that one tire had picked up a nail and was going flat.  Thank goodness for many things--helpful people at the gas station and AAA.  The AAA guy arrived about 45 minutes later and changed the tire. Both he and the gas station attendant suggested a tire place a mile away.  I had the flat fixed ($5) so I have an adequate spare, just in case.

My early afternoon destination was Stronghold Conference Center in Oregon, Illinois, site of the AAUW fall conference.  I had several things to clarify about the facilities that we will use.  All my questions were answered and I headed south from Oregon on IL-2 along the Rock River .
At Dixon I turned at the sign that said "Boyhood Home of Ronald Reagan."  I'm not a great fan of Ronald Reagan (particularly his economic policies) but since I was in the neighborhood I decided to stop. 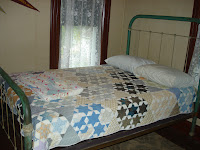 Reagan and his family (parents and older brother) lived in five houses in Dixon.  His fondest memories were for this one, where they lived when he was in his early teens.  It is a Sears house, built in the 1890's, that the Reagans rented.  It was later divided into apartments and fell into disrepair. It was restored during his presidency.  The furnishings are 'of the period,' not the Reagans' own, with the exception of a quilt that Nell Reagan's Sunday school students made for her.   There is a Seven Sisters quilt on the bed in the boys' bedroom. 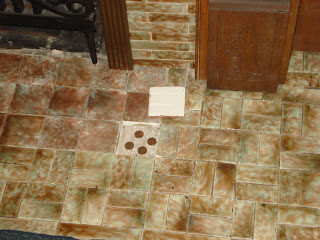 Pres. and Mrs. Reagan and his brother made a return visit to Dixon in 1984.  The President looked at the parlor fireplace, bent down, and lifted up a tile.  It had been loose when he was a kid and he hid pennies there.  After sixty years and many tenants the tile was in its place, still loose.  The four pennies that he left behind that day are now framed with a photo of him lifting the tile.  These four pennies are substitutes. 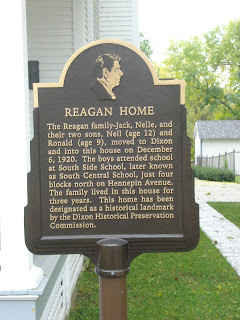 The sun came out when I got to Kewanee at the end of the day.  I realized what I forgot to pack:  the camera cable so I could download photos each day.  I thought about having my husband overnight-mail it -- but there's a Radio Shack right around the corner from the motel!  I now own a card reader, and as this blog shows, it worked just fine with today's photos.
Posted by Nann at 8:53 PM No comments:

This post ends what turned out to be a year-long project to document the seasonal changes in Dead Dog Creek Ravine.  Serendipitously, last Thursday evening the  Lake County Stormwater Management Commission  had a public meeting to discuss the stream restoration that will begin this fall.   I was able to attend.

From the SMC website:
The restoration project will stabilize and restore the stream channel and ravine slopes of the creek between Sheridan Road and Geddes Avenue.

Dead Dog Creek is a ravine system that drains approximately 3 square miles of the larger Kellogg Creek watershed. From the ravine, the creek flows through the high quality coastal plain wetland complex of Spring Bluff Forest Preserve and Illinois State Beach Park into Lake Michigan at two outlet points. Approximately 41% of the land in the Dead Dog Creek subwatershed is developed and is generating stormwater runoff from impervious areas into the creek. The additional water flow from urbanization coupled with the locally high gradient stream channel in the ravine has resulted in increased erosion of the stream channel and banks, and sediment to the coastal plain and Lake Michigan. The conversion of land to urban uses has also caused urban runoff pollutants into the stream system. The project will reduce the sediment pollution created by the eroding stream, and will begin to address urban hydrology changes that are increasing the volume of runoff and pollution into the creek.

Last month I took a picture of a tagged tree. That was part of a census of all trees 6" and larger in the ravine.  The species included 142 American elms, 130 cottonwoods, 86 sugar maples, 74 burr oaks, and 61 box elders.  The restoration will remove only trees in the access path or work area.  The canopy is fairly dense so some thinning will help the understory.  The big concern is the erosion on the bluffs (whole slopes fall away) and in the streambed.

The restoration project will begin next winter.  I predict I will be taking more photographs of this beautiful ravine! 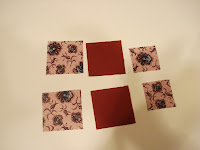 Back in July Bonnie Hunter issued a challenge suggested  cheddar bow ties as a leaders-and-enders project.   I didn't have any cheddar-orange solid in my stash.  I didn't have many cheddar prints among my 19th century reproductions, and no yardage in that color.  I did have quite a lot of rust-colored solid (acquired when I bought a quilter's estate in 2007). 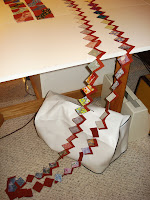 Of course there are projects I ought to be working on--projects that have due dates.  I could pull fabrics for one; cut for another; piece for a third; set a fourth; and baste, quilt, and bind many others.  I didn't do any of those.  I am NOT doing these as leaders-and-enders--I'm just full-steam-ahead chain piecing.  In the process I've used a lot of squares from the RCTQ Baseball Swap and a fair amount of that rust solid.  These bow ties are 3.5" unfinished and they are sooo cute! 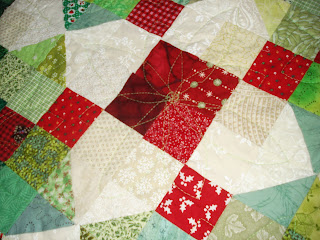 Here is a close up of the quilting on Piece and Joy   I used light lime green thread. The loopy flowers are poinsettias, sort of.  I quilted a continuous line of Christmas tree outlines in the borders.

The Friends of the Library will begin selling raffle tickets for Piece and Joy at LibraryPalooza on September 24. 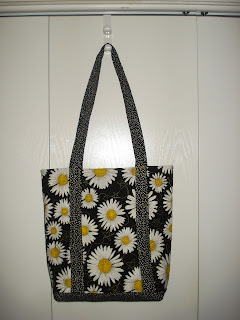 I made a tote bag for the P.E.O. International Convention which is just two weeks away.

I purchased the large-scale daisy print in Philadelphia in 2008.  (I was there for ALA Midwinter.)  The lining is yellow and there are two inside pockets made from another daisy print.  I used Warm & Natural batting in the body of the tote as well as in the handles. 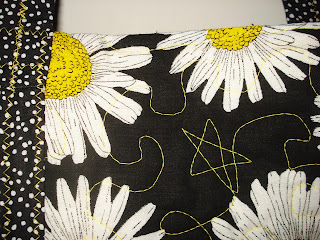 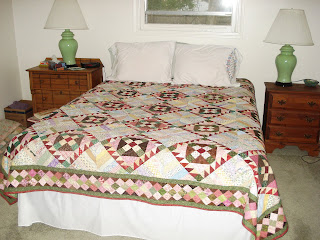 Way back in January I posted my nearly-completed version of Roll Roll Cotton Boll, which was Bonnie Hunter's holiday-season mystery quilt.  Pam S. quilted it and delivered it to me at our guild meeting this week.  I bound it on Thursday evening.

This quilt was made entirely from my stash! 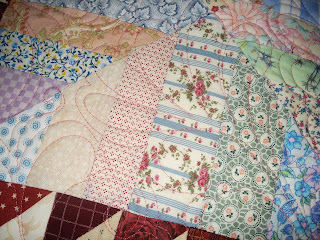 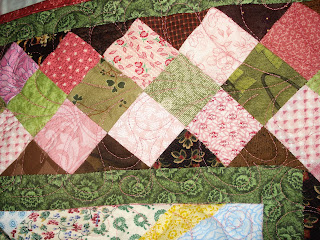 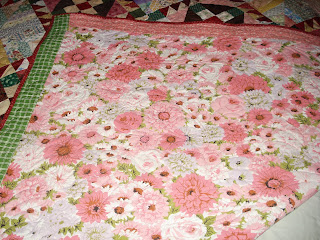 Quilting myself into a corner

I made a bunch of 16-patches as leaders-and-enders (2" squares=6.5" blocks) and put them up on the design wall. I made a few bronze-and-turquoise square-in-square blocks as the alternates.  Not very exciting. I pulled out a red-and-gold print.  Alternating stars!  Much better. 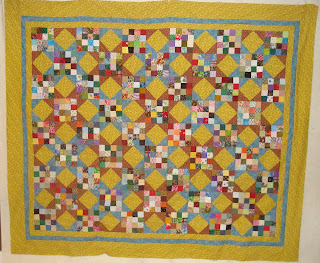 One of the perils of as-the-spirit-moves designing, especially in combination with use-what's-on-hand no-buy, is that if there's not enough fabric, that's it.  I had plenty of the turquoise (BTW, the date on the selvage was 2001) and I had a lot of the bronze.  I had just some of the red.  And that's what "quilted me into a corner."  I think this design would work better if the stars continued into the border, but I didn't have enough of that red, nor did I have anything in my stash that would coordinate to my liking.  So I used the bronze twice in the border, which emphasizes that fabric.
The flimsy (unquilted top) is 72x84 and used 5-5/8 yards from my stash.  I am still using 2" squares for leaders-and-enders so a full-star version of this design may be here sooner than later.

And, in other quilting news: 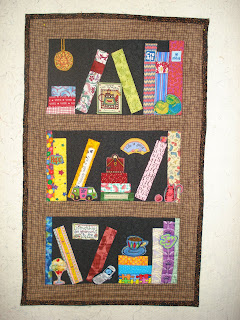 As I have posted before, I make bookshelf quilts for colleagues:  retirement and MLS graduation.
This is Carole's Bookshelf, presented at her retirement party on August 31.
Posted by Nann at 9:06 AM 8 comments: